Getting time in a dark room to shoot Nazis on a high-end computer is an honored tradition in the video game business. Bethesda Softworks and developer Machine Games let me continue that tradition with a demo of their upcoming first-person shooter Wolfenstein: The New Order.

But they’ve shaken up the formula by changing the setting away from the era of World War II, which was so overdone it bored gamers. This title is set in an alternative universe in 1960, after the Nazis won the Second World War.

The change gives Machine Games (whose founders — former Starbreeze employees — created titles like The Darkness) a chance to refresh the shooter genre with giant Nazi robots, powerful new weapons, and an environment in occupied Europe that we haven’t seen a thousand times before.

You play the familiar hero, B.J. Blazkowicz, as a member of the resistance that is staging a counter-offensive against the Nazi regime, which has conquered the world.

The graphics are stunningly beautiful and based on the id Software Tech 5 engine. While id is busy working on the next Doom, Machine Games is taking its tools and making a title that will run on the PC and next-generation game consoles. So far, Wolfenstein: The New Order is announced only for the PC, Xbox 360, and PlayStation 3.

Your mission is to infiltrate heavily guarded Nazi facilities and take control of their superweapons, which the Nazis used to turn the tide of the war. They have become ruthless occupiers, and their commander, the evil Frau Engel, is a fascinating madwoman. She’s like a female version of the Nazi SS colonel Hans Landa (played by Christoph Waltz)  in Quentin Tarantino’s Inglourious Basterds. The story is inspired by that film, which is a revenge fantasy where a small team of resistance fighters gets a chance to take out Hitler.

In one scene we saw, Blazkowicz is posing as a servant aboard a Nazi train bound for Berlin. He has to serve coffee to Engel, who is sitting in the dining car with her “psycho-sexual boy toy, Booby.” A mechanical Nazi dog created to look like a steel version of a ferocious German Shepherd stands guard, giving you no chance to run.

The aging Engel tests whether Blazkowicz is a Jew or not, putting him under an intense, threatening microscope just so she can have a little fun. She claims she can tell if someone has “pure blood.” She forces Blazkowicz to choose between two photos: one that makes him happy or another that makes him disgusted.

“I can spot an impure with my naked eye,” she said.

Blazkowicz survives the tense encounter without blowing his identity and meets another secret agent, Anya, who becomes the coach in his ear, whispering via radio the instructions he has to follow.

Anya seems a little like Master Chief’s Cortana in Halo. She is strikingly realistic in her 3D animation, with blemishes on her skin clearly visible.

If this sounds like Machine Games is layering an actual story on top of the Nazi ass-kicking, you’re right.

Jens Matthies, the creative director at Machine Games, told GamesBeat’s Rus McLaughlin that the scene is an homage to Tarantino’s film.

“We are developing a good drama with an immersive story,” Matthies said in a presentation of the game.

As Blazkowicz, you get the chance to “rewrite history” and overturn the Nazis. 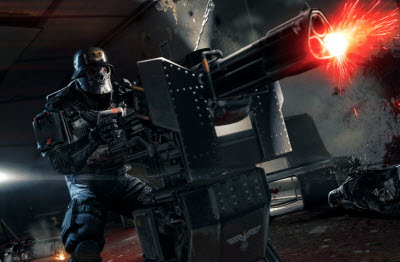 In the level we played, Blazkowicz is driven to a Nazi research facility in what used to be downtown London. The driver lets Blazkowicz out and tells him not to waste his chance. He then barrels into the giant statue beside the building and sets off his suicide bomb, bringing the statue and some of the building crashing down. Blazkowicz has to enter the building through the rubble. But first, he has to deal with the Nazi robot dogs and some guards.

While Blazkowicz seemed like a fearful but humane character with Anya and Frau Engel, he now turns into a gruff-talking version of Duke Nukem. A little stolen weaponry does wonders for his confidence.

“I’m not your prey,” he says to a dying mechanical dog. “You’re mine.”

Once he’s inside the facility, he runs headlong into a big Mech, a Nazi robot that is very hard to kill. The Mech effectively shuts down a frontal assault, and it is aided by the force of some very fierce Nazi shock troops. You have to dash to the side room, load up on weapons and ammo, and then immediately start taking out soldiers. They shoot from an upstairs level down at your position. You have to be careful, or you’ll die — as I did over and over and over again.

Leaning around a corner, Blazkowicz says, “No power like firepower.” But the Nazi firepower was too much for me. (Afterward, Matthies said, “Clearly, we made the game too hard.”) He said they would go back and adjust it.

The artificial intelligence in the soldiers is good. If you draw a bead on them, they hide behind stone columns. You can shoot at the columns and watch them crumble, as the environment is destructible. I was able to rush to the stairs and take out a bunch of Nazis at close range. Once above ground, I had to face a Nazi across the way with a gatling gun. I took him out with some heavy ordinance and stocked up on ammo again. Then I had to deal with the Mech with nothing but a machine gun. It took a long time, and I had to keep peeking around corners, but I finally took it down.

Then I went into the next room, which has a giant, destructible model of the moon. The Nazis once again came from all directions, including some flying drones that shot at me from above. (For 1960, those Nazis sure had a lot of sophisticated weapons.) That was about as far as I got.

But the developers showed what happens when you get further. Blazkowicz can dual-wield machine guns or pistols. He finds secret papers along the way and receives directions from Anya. He uses a cool weapon that can shoot a beam through metal, slicing its way through metal barriers. He moves into the ducts to get around and rides atop an elevator. He finds ancient artifacts and a very impressive gun in the Nazi test facility.

Then he moves into a vast hangar for spacecraft. Nazi guards are everywhere. Blazkowicz takes them on. But then he has to deal with the Mechs, which are relentless in their pursuit. He has to run throughout the facility as he is pursued, but he can turn the tables by hopping into a helicopter and operating its sideguns. The battle for the hangar lasts forever. And after you take out the Mechs, you have to take out a giant Nazi supersoldier.

Even though he is evidently talking to Anya, Blazkowicz is full of annoying bluster. Blazkowicz says in a very anachronistic way, “Silly Nazis. You gotta go bigger. Go big, or go home.”

At that point, I felt like Blazkowicz was a cocky son of a bitch. But the developer isn’t trying to paint him as a bad guy. The publisher has appropriately warned its audience that the game “should not be construed in any way to condone, glorify, or endorse the believes, ideologies, events, actions, persons, or behaviors of the Nazi regime or to trivialize its war crimes, genocide, and other crimes against humanity.”

Indeed, you don’t play the Nazis. You get to shoot them. For people who are nostalgic for those World War II games where you got to do plenty of that, this game is heaven-sent.

I like what I’ve seen so far. The new Wolfenstein may be a test in the market. It raises the question, are first-person shooters simply in an endless cycle, where a developer can launch a new game with better graphics to satisfy fans? Or will the attempts to deliver an engaging story actually rope in a wider audience? So far, I’m intrigued by characters such as Frau Engel, who offer a lot of potential for the storytelling side of the game. But I suspect that many gamers may simply dismiss such trappings as window dressing for the next cool shooter with great graphics.