William “B.J.” Blazkowicz learns it’s not as simple as using Google Maps to find a Nazi compound in Wolfenstein: The Old Blood.

But while this standalone prequel to last year’s Wolfenstein: The New Order stumbles a little, it still has the same solid controls, an epic and often personal story, and engaging mix of counter-factual history and the occult that made The New Order one of the better games in this long-running, World War II first-person shooter series — as well as one of the better games of last year.

But even if you don’t usually care for first-person shooters, you may get a kick out of The Old Blood.

Wolfenstein: The Old Blood has the same controls — tight, intuitive, and with a slight aim assist — that made The New Order such a solid shooter. But you will have to go into the options and dial back the sensitivity a little bit. It’s a good thing there’s an unarmed section at the beginning where you can adjust them without worrying that you might get shot.

Like the best first-person shooters — Halo, Call of Duty, etc. — the gun battles in Wolfenstein: The Old Blood are frantic and harrowing. By pairing narrow corridors with more open areas that have multiple pathways and larger fields of battle, this not only gives you plenty of ways to approach your enemies, but plenty of ways for your enemies to approach you as well. You also have an arsenal of effective but varied weapons, including a powerful, rapid-fire shotgun and a silence pistols that, unlike in so many other shooters, isn’t just a glorified pop gun. It also helps that the Nazis are competent, usually aware of their surroundings, and know how to duck for cover when some American jerk starts shooting at them. 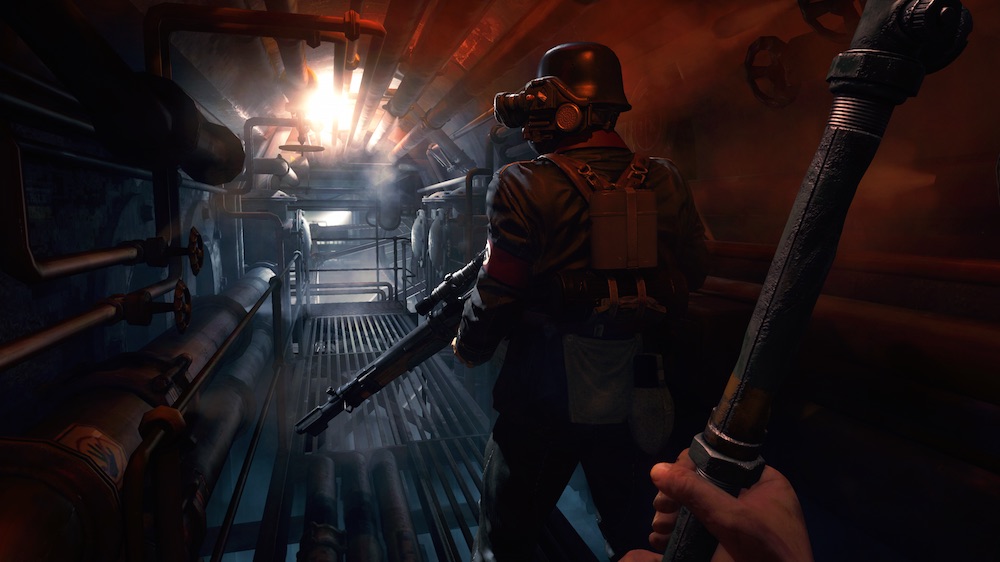 Above: “So I kissed him upside the cranium with an aluminum piece of pipe. …”

Like Metro Redux, Battlefield: Hardline, and well, The New Order, The Old Blood augments its gunplay with moments in which you can get sneaky. This gives you choice in how you can approach some battles. Do you go in all quiet-like, taking out your enemies silently? Do you go all guns-a-blazin’, shooting up the place like Rambo? Or do you do what I usually do, and use stealth to thin out the herd … until I screw up and alert everyone nearby, at which point I go all guns-a-blazin’ and hope for the best.

The Old Blood also has a lengthy section of the first chapter when you have to be sneaking because taking the direct approach will get you killed. Though I’ll come back to this in a moment.

While The Old Blood is largely The New Order again, it does add some new elements. Early on, you get two pieces of pipe that can pry open hatches, doors, and enemies’ skulls. But what’s more interesting is that when you see sections of a cement wall that’s somewhat corroded, you can use these pieces of pipe to climb up the wall like you used two picks to climb an ice wall in Call of Duty: Modern Warfare 2. You can even, when you get to the top, peer over the edge and shoot someone, which is not only helpful, but it also makes you feel like a badass assassin. And while the pipe-climbing mechanic is sometimes necessary to get from point A to point B, you can use it to locate secret areas — or to a different vantage point from which to attack.

It keeps you on your toes

One of the fun mechanics that The Old Blood carried over from The New Order is that there are a times when it throws you for a loop. For instance, you might open a door and come face-to-face with a Nazi soldier. Or his stupid dog. It also takes a rather interesting turn at one point, though this change-up does fit both the story and the game’s tenets nicely. 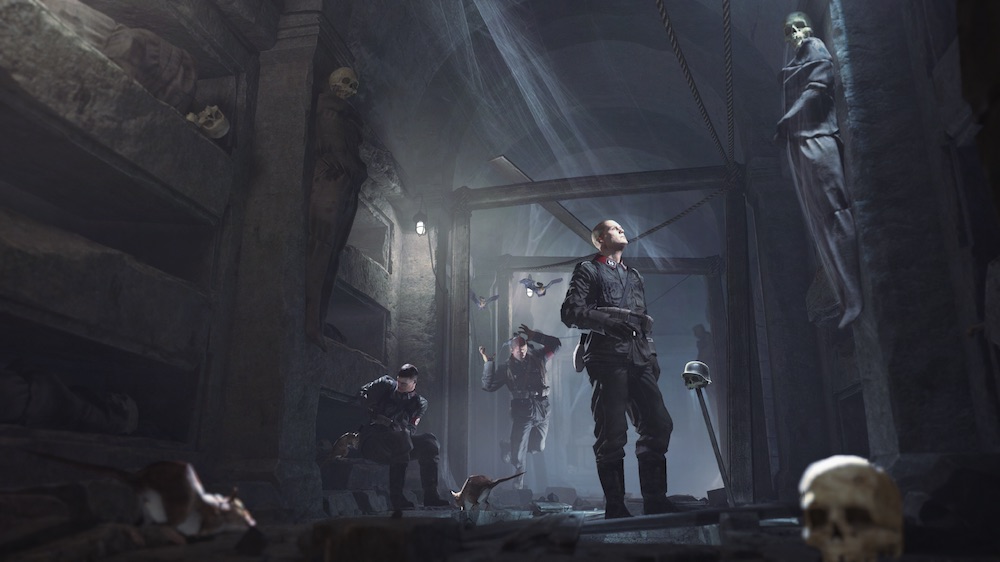 Above: They want to take over the world, but not if there’s going to be bats.

Much like The New Order and its predecessor, 2009’s Wolfenstein, The Old Blood has a number of fun nods and references both to previous games in this series, and the numerous occult rumors that have followed the Nazis since World War II ended. Some which are just good for a chuckle, but others may actually help you out, especially if you don’t mind the taste of dog food.

It goes on a bit too long. Plus, it’s slightly harder than the rest of the game since your enemies are guys in power armor and you usually just a guy with a pipe. As a result, you may occasionally opt to die so you can start over from your last checkpoint and do it again — especially since you keep losing your gun. Admittedly, had this stealth section been broken up by an all-out firefight or two, it would’ve been fine (and it does end with a rather spectacular one), but as is, it’s redundant and thus drags on too long.

Given how stealth is your friend in this game, it’s easy to think it would’ve been a bit better if the stealth mechanics involved more than just being able to sneak up behind people and jamming a pipe into their neck. It’s nothing big, mind you, but it would’ve been helpful if you could distract someone by throwing a shell casing like you do in Battlefield: Hardline or could shoot out the lights like in the Splinter Cell games.

Because it’s set years before The New Order, you don’t have any of that game’s cool Nazi tech in The Old Blood. This makes narrative sense, but they were so much fun in that first game that you’ll still miss them here. You do get some cool new weapons — such as a pistol-sized grenade launcher — and the guns you do have are effective against Nazis. And their stupid dogs.

All the cleaning up you have to do

When not getting into frantic firefights or sneaking around, you’ll do a lot of exploring in The Old Blood. This is in part because there might be alternate pathways, maybe even a secret area or two, but mostly because Nazis are slobs and leave piles of ammo, armor, and even new weapons lying around. What’s annoying, though, is that you have to manually pick everything up, instead of just doing it automatically like in other games. As a result, you spend a lot of time picking up after yourself and your friends, which gets tiresome after a while. 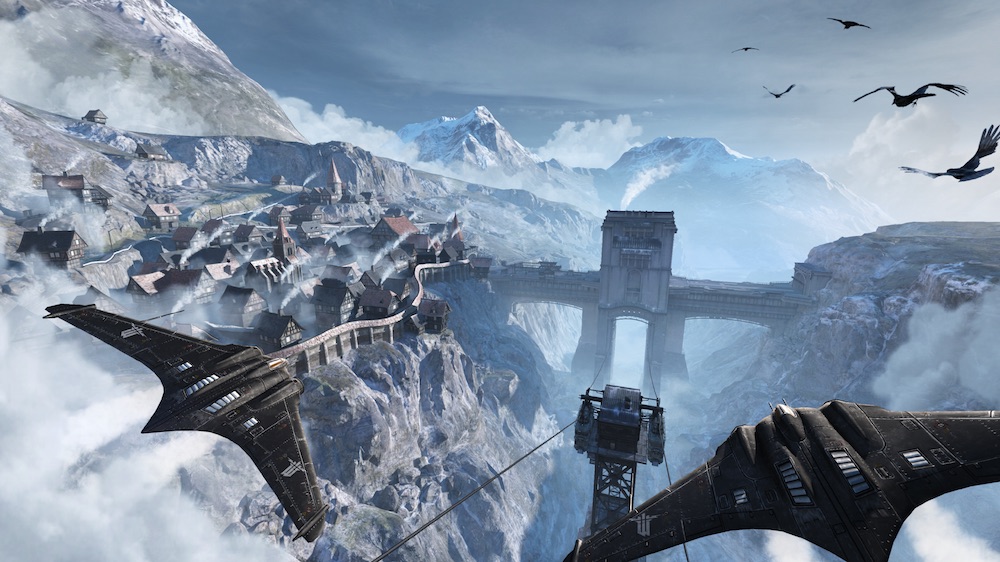 Above: “Hey Hanz, after we kill that American scum, let’s fly these babies to Mexico. What do you say?”

While Wolfenstein: The Old Blood isn’t meant to be a full game, it’s so much fun that I wish it had more, especially since MachineGames somehow managed to cram as much variety into this as they did The New Order. Still, while it clocks in at around 6 hours, you can actually double or triple that time since it’s so much fun that you’ll probably play it more than once.

It’s pretty simple: If you enjoyed Wolfenstein: The New Order you’ll like Wolfenstein: The Old Blood, too. And the same goes for people who like shooting Nazis in the face from the first-person perspective or just first-person shooters. With the exception of that stealth part that goes on too long, it’s an engaging action-packed shooter that not only gives you options when it comes to taking out your enemies but also gives your enemies the same options when it comes to taking you out as well. That it’s yet another chance to shoot Nazis, and their stupid dogs, is just the icing on the, well, dog food.

Wolfenstein: The Old Blood is out now for PlayStation 4, Xbox One, and PC. Bethesda Softworks provided GamesBeat with a PlayStation 4 code for the retail version of the game.