Video games have long neglected the potential of female heroes, instead putting women in princess or other subservient roles. We may be headed in a better direction, as 2013 has been a record year for memorable, well-developed female leads. Lara Croft made her comeback through a personal journey in Tomb Raider, Elizabeth proved herself a worthy ally in BioShock Infinite, and Ellie did young girls proud in The Last of Us.

GamesBeat talked to some of the developers of these games and more, asking what makes women characters important? Diversity is something we should strive for, but are we missing more compelling reasons for including them? Do Lara and Ellie only matter to fill the gender gap — to appeal to a wider demographic and counter narrow marketing assumptions?

When asked what female characters bring to games that’s unique, some developers pointed out that, when they first imagined their lead character, they didn’t plan to make her female.

“I don’t think there are advantages or disadvantages per se, and we certainly didn’t start the project thinking we must have a female lead,” said Jean-Maxime Moris, the creative director and cofounder of Dontnod Entertainment, the developer of action-adventure game Remember Me. “In the same way male characters should not be seen as better than female ones based on the gender factor, female characters should not be seen as better based on that sole fact, either.”

Above: Concept art of Nilin from Remember Me.

The same qualities are important to both male and female characters: resonating personality traits, internal conflict and growth, and so on. The goal is to write a strong character regardless of sex or gender, he said.

“Our audience is smart, and our media is maturing, however slowly,” said Moris. “Movies and books have had female characters for decades and centuries, so what I am doing is just treating our audience as one made of mature human beings that can identify with females as much as males, gender being absolutely irrelevant to the depth of what human beings experience and achieve in the world.”

Despite how human experiences can surpass gender barriers, Dontnod chose to make its hero a woman for a reason: Nilin’s gender benefited the story by working to emphasize a perspective we don’t normally see.

“Remember Me revolves around a cyberpunk story of intimacy and personal memories, which is very different from more traveled cyberpunk themes like physical augmentation,” said Moris. “In order to mark that difference further, we decided to go for a female character. It was a very natural process.”

Moris clarified that this doesn’t mean female characters suit the theme better than their male counterparts. “I was saying that cyberpunk games generally revolve around body augmentation and suggesting the fact that they all tend to feature male characters.”

However, Dontnod deliberately chose to turn against the norm of both male leads in sci-fi roles as well as the typical expression of cyberpunk. Perhaps gender plays a bigger role in story creation than developers may be willing to admit. 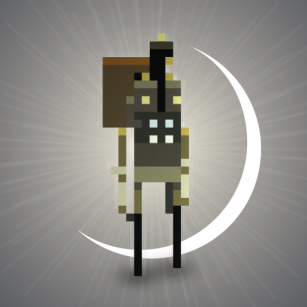 Above: The Scythian from Superbrothers: Sword & Sworcery.

Take indie-adventure game Superbrothers: Sword & Sworcery. Due to the pixel graphics, it’s easy to overlook that the lead character, the Scythian, is a woman. This was intentional. Designer Craig D. Adams and the staff at Superbrothers said that they chose to reveal her gender “when the time is right,” much like Samus Aran in the Metroid series, “whose gender identity is perhaps secondary to her attitude.”

The Scythian’s gender is also one of historical importance. “[She] is intended to be a sister-of-sorts to the ‘Amazon queens’ mentioned in Homer’s Illiad, a tribe of warrior women who we now know exist in the archaeological record in Bronze Age Persia and Scythia,” said Adams. “The Scythian exists in a world both whimsical and imagined, but we wanted it to have a soul and a texture grounded in this historical reality.”

He added, “The end of her story sidesteps the traditional action-packed boss battle in favor of a kind of cosmic Joan of Arc moment. A male character could have probably embarked on the same adventure, but perhaps the story and the tone would’ve ended up in a more traditional place.”

Adams was reluctant to expand on this idea, however. 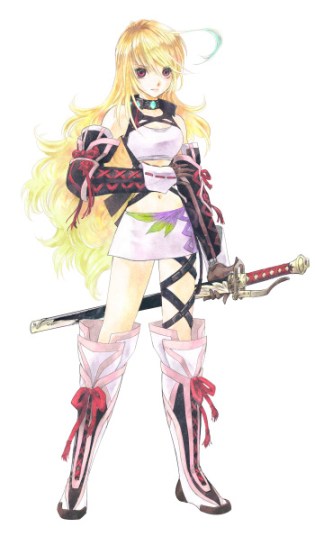 Above: Concept art for Milla Maxwell in Tales of Xillia.

The role-playing game Tales of Xillia, which Namco Bandai localized in North America this month, introduces the first woman protagonist to the Tales series. Producer Hideo Baba told us that “much of what determines a character’s gender comes from the game’s story.” While Milla Maxwell appeals to the female crowd, “anyone can be a hero,” he said. However, sometimes one gender may be more appropriate.

“I do believe that there are specific emotions that cannot be depicted easily with male characters or not at all, such as the special bond a mother shares with her children. The unique benefit to both female and male characters is that the player can be provided a different outlook on life.

“There are discoveries to be made in different ways of experiencing new points of view and values these characters have toward the opposite gender. However, in the end, what’s most important is not the gender of the character but their human nature.”

The feminine perspective may reach beyond our shared experiences as human beings, though. It can also offer more than a means for historical accuracy or a way to reverse story expectations. For some developers, female characters not only serve to represent women but also inspire commentary on women’s issues. And sometimes, a larger message is at stake.