Virtual networking startup Wonder announced today the launch of the next iteration of their video conferencing software.

Berlin-based Wonder, previously known as YoTribe, has created a virtual space where groups can get together to create connections in a way that the company says feels natural and energizing. The company raised $11 million a year ago.

Guests move around the space freely, choosing their conversation partners and actively shaping the event. This makes space for serendipity and fosters interactions and connections between participants. It’s another kind of replacement for our Zoom calls, and it’s attacking the problem of tech fatigue during the pandemic.

Though virtual events and video conferencing have become the new standards, according to a new survey, participants don’t feel like they are truly “connecting,” according to the company’s poll.

With 84% of respondents admitting to not paying full attention to video conferences, it’s no surprise so many of us feel drained and detached
when on a video call, Wonder said. However, events on Wonder generate energy and real serendipitous human connection by leveraging simple, yet sophisticated tools and a natural need to interact with others, the company said.

“Social spaces are at the core of our lives,” said Wonder co-founder, Stephane Roux, in a statement. “Our desk at the office and the connections we made there, the hotel bar where we met a slew of new people at that last great conference, the courtyard in college where we met some of our now oldest friends. Those spaces are filled with meaning because of the shared experiences we made with others there and we want to build those spaces online.” 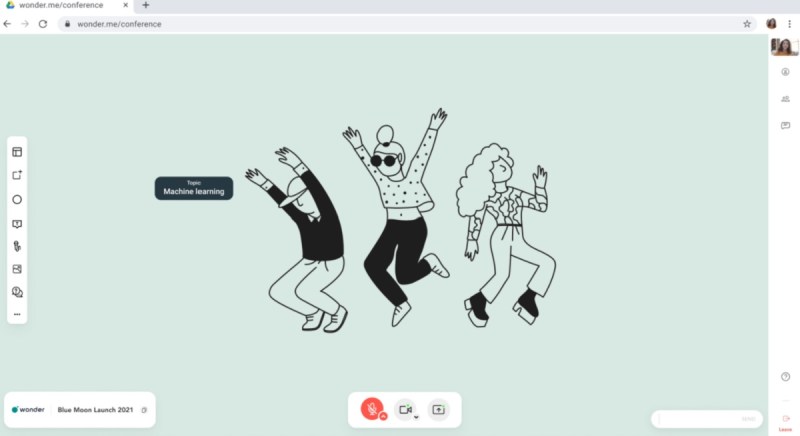 Above: Wonder lets you stage online events where people can network.

Wonder is a browser-based 2D virtual space in which users move their avatars around freely. When they get close to other avatars, a video chat opens. The spaces contain up to 500 participants and users can move between groups to meet others and experience the event together. Hosts can customize this space with backgrounds such as a corporate logo, solid color, abstract image, their own uploaded image, and more. Within that “space”, hosts can build “areas” which give structure to the space and can represent different themes within an event or conference, such as “Breakout Session” or “Meet and Mingle.”

More than 75% of Wonder’s current users, including organizations as diverse as NASA, Deloitte, Harvard, Vodafone and Paypal, said the freedom of movement and ability to initiate conversations with others offers flexibility and a more engaged audience.

“When COVID hit, we all did the best we could with what we had: conference calls became video calls, etc.” said Roux. “But in the virtual space we don’t have to do things as we always have. We can reimagine how we connect and interact, and rather than trying to recreate the physical world, we can create a new, dynamic experience for our new normal.”

Wonder is currently free and available on most web browsers. It has had more than 3.8 million participants and 200,000 hosts to date. Wonder has 45 employees and it has raised $12 million to date.

Regarding competition, Wonder said, “We think that the virtual events market is still in its early stages. The reason people get together is to build connections with others and to meet new people, and there still isn’t really any products out there where this feels natural and energizing. Wonder is designed for human interaction at its core. We’re less focused on event logistics and more on facilitating connections and conversations between people (we actually routinely have talks with companies like Hopin on how to integrate and partner).”