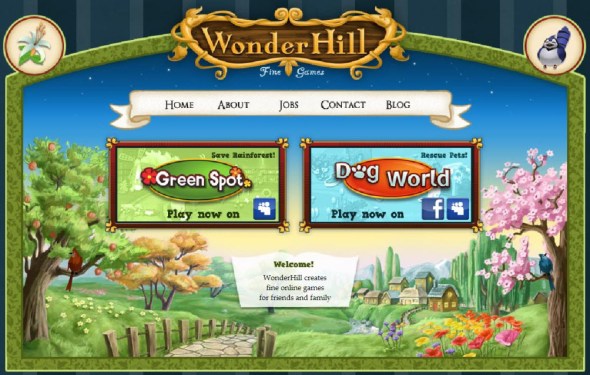 WonderHill is announcing today that it has raised $7 million for its first round of funding for its web-based casual games.

Its games include Green Spot, where you save the rain forest, and Dog World, where you rescue pets. Both are on MySpace, while Dog World is also on Facebook. The investors in the current round include Charles River Ventures and Shasta Ventures. Previously, the company raised $750,000 in seed money from Ooga Labs, which spun out WonderHill.

The San Francisco company is headed by James Currier, former chief executive of Tickle, and he’s on the board of directors of Linden Lab. Its chief creative officer is Nick Rush, former chief creative officer of Pogo.com and former vice president of creative at iWin. Stan Chudnovsky is chief technology officer. They created WonderHill in 2008, and it now has 15 people. Its competitors include social game companies such as Zynga and Playfish as well as Electronic Arts’ casual game site Pogo.

Rush created many well-known games such as Word Whomp! and Poppit!, which are still among the top games at Pogo, and he helped create Club Pogo. At iWin, he managed the development of games. And if you want to go way back, Rush was the creative force behind the Flying Toasters screen savers created by Berkeley Systems, and he collaborated on the classic You Don’t Know Jack casual game.

Saar Gur of Charles River Ventures said the firm invested in WonderHill because of the veteran team with the ability to create viral web hits over and over again. The target audience is over 30.

Violent fare will definitely not be part of the game portfolio, Rush said. The company will focus on building games with a “magical design style and cooperative game play.” Most web games are competitive, but some, such as Rebel Monkey’s CampFu, focus on collaborative play. The company is hiring.

Currier said the $7 million may seem like a lot for a game company, but its rivals have raised more, with Zynga raising $35 million and Playfish $21 million. But the money is enough to fund multiple games in development at the same time.