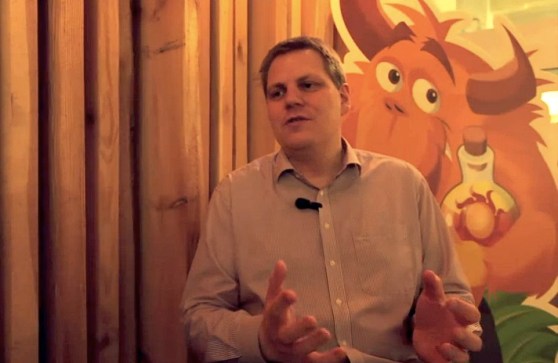 Among the cut-outs of monsters and knights at Wooga’s office in Berlin, under the banners and giant fake leaves, about 280 people from 40 different countries are working to craft the next big social games hit.

About 50 million people already play Wooga’s games, including flagship titles Diamond Dash and Monster World, each month. This week, the company announced four new games for web and mobile – and that it is currently profitable, with half of its revenue now coming from mobile.

It’s an impressive achievement for a company so young. Jens Begemann – Wooga’s very tall, very calm CEO – co-founded the company with Philipp Moeser and Patrick Paulisch in Berlin in 2009. Before that, he spent several years working as chief product officer for Jamba (the ringtone-maker founded by Germany’s Samwer brothers).

Wooga is still based here – it’s important, Begemann says, to have everyone working together under one roof – and is gradually taking over further floors in its building, an old 19th century bakery factory.

Here, we speak to Begemann about starting Wooga, keeping a healthy company culture, dealing with Facebook – and his thoughts on the hype surrounding startups in Berlin.

Video shot and produced by Glenn Goodison. This story originally appeared on VentureVillage, one of VentureBeat’s editorial partners, in Germany.