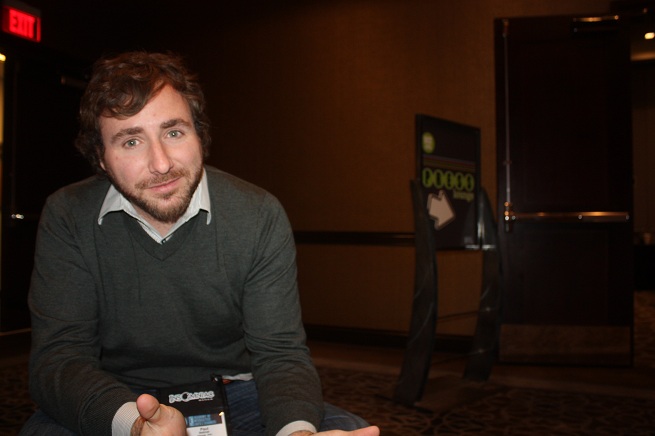 Words With Friends co-creator Paul Bettner has started a new game studio after leaving Zynga last year. He said in an exclusive interview with GamesBeat that he plans to create games that run on Ouya’s Android-based $99 game console coming in June.

Back in October, Bettner and his brother, David, made headlines when they resigned from Zynga. The social gaming giant had paid $53.3 million for their company, Newtoy in McKinney, Texas, in 2010. And Words With Friends is still played billions of minutes each month on mobile and social game platforms. The Bettners were part of an exodus of key employees and executives at Zynga, which has reported weak financial results.

Julie Uhrman, the chief executive of Ouya, said in her talk at the DICE Summit that she was excited that Bettner’s firm will make two games for her company’s console, which brings Android games to the television. She also said that Tim Schafer’s Double Fine Productions will also publish its game, The Cave, and another upcoming game, Reds, on Ouya.

Bettner said David, who moved to Austin, won’t be joining his new company, Verse, which is based in McKinney. The company has seven employees. David is on the board.

“I thought I would take time off, but that didn’t work out,” he said. “There is so much exciting stuff going on.”

He said that he feels like the launch of the Ouya console is a lot like the excitement in the early days of the iPhone. He left Microsoft as a game developer in those days to start Newtoy, and everybody thought he was crazy.

“It felt to me that the opportunity was right,” he said. “I felt like I have been an explorer to an uncharted island. Now I am looking back at the mainland that I left, and I think the pendulum will swing back now. This television gaming will follow the similar disruption that happened in the handheld space.”

Bettner believes that Ouya’s solution will satisfy many people who want to get an experience like an app store on their television. When Bettner spoke to Uhrman at Ouya, he got more excited about the possibilities of getting free-to-play apps on his TV.

“Why can’t I get that experience on my TV,” Bettner said. “A bunch of people like me are waiting for this to happen in their living room. This talk of consoles dying is ridiculous. I want to take what I learned and bring it back to the industry I left. The app store democratized gaming on mobile devices. The same opportunity should exist on the console.”

As for quitting Zynga, Better said that he found that “I am not good at working for anybody else. My vision is very different.”

Bettner has funded the company himself but may seek a seed round. He is also fascinated by Hollywood funding models, where directors, actors, and other talent get together for a funded movie and then move on to something else.

“You can’t do that in the game industry now,” he said.

David Edery, the head of the mobile game firm Spry Fox, said his firm concentrates on making hobbies, rather than games. That is, he makes things that people will come back to every day and play over and over again. That’s what Bettner accomplished with Words With Friends, and that is what he aims to do again. He isn’t talking about what titles he will do yet. But he wants to tailor it to fit the Ouya device.

Bettner said he was impressed when Ouya completed its Kickstarter, raising $8.3 million, and then met its schedule for shipping its development kits last December.

Will Bettner repeat the success of Words With Friends? “We built that with three people,” he said. “We didn’t know it would be a cultural sensation. It was good enough and focused so much on execution. That is still driving us today. We are trying to build that hobby again, becoming part of someone’s life so they can’t wait to play it again with their friends.”