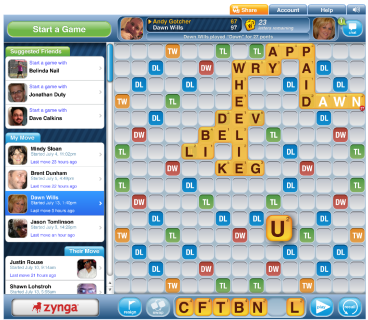 Social gaming company Zynga today announced that it is bringing its mobile Scrabble-like game Words With Friends to Facebook.

That means players on Android devices and devices running the iPhone operating system iOS will be able to carry their active games over to Facebook and play them on the website. They will also be able to compete against players on Facebook while playing on mobile devices. That cross-platform functionality works on both Android and iOS devices, a Zynga spokesperson told VentureBeat.

“We have the capabilities to handle multiple types of games and tune infrastructure to optimize specific game client interactions,” the spokesperson said. “We don’t expect any lag time between an iOS player and a Facebook player and have tuned the infrastructure appropriately.”

Words With Friends is basically like Scrabble. The game assigns point values to letters, and players spell out words on a game board. The game awards multipliers for placing letters of special tiles.

Players can compete against their friends, or they can compete against a random opponent. Gameplay is asynchronous, meaning the two players don’t have to play against each other at the same time. Players get a notification when it is their turn through the mobile device’s push notification. Words With Friends on Facebook will use Facebook’s internal notification system to alert players when it is their turn, Zynga told VentureBeat.

The company would not comment on whether it would be bringing a similar cross-platform experience to its other games, like its newest title Empires & Allies. The company currently has a mobile version of FarmVille, another game on Facebook.

Zynga has become a Facebook distribution powerhouse like no other game company. The company has delivered hit after hit to Facebook. That makes it a lot easier for Zynga to generate revenue, since a percentage of users usually pays for items in otherwise free games. The company filed to go public in July.

Zynga’s latest social game, Empires & Allies, is another hit for the company. It attracted more players than FarmVille, its first breakout hit, in just 25 days. Empires & Allies is gaining new users at a rate of a million a day and 8 million a week now, according to AppData.