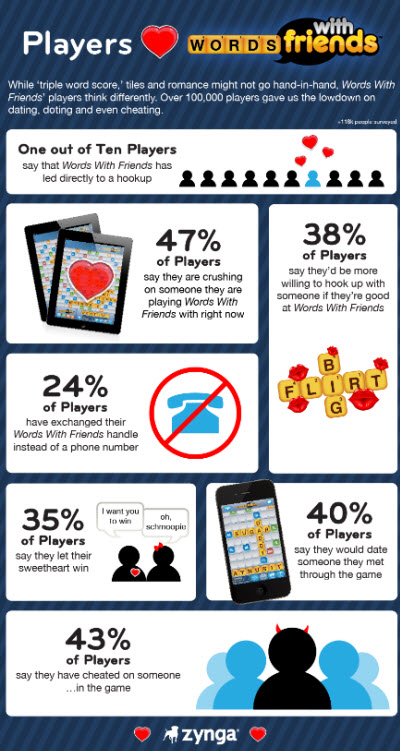 Perhaps it’s time to start calling it Words With Friends With Benefits.

Fans of Zynga‘s Words With Friends social game on Facebook are making love connections. For Valentine’s Day, Zynga polled 100,000 of its 19.9 million players and found that one in 10 of them said that playing it has “directly led to a hookup.” That’s amusing since the Scrabble-like word game isn’t outwardly promoting dating between its players.

About 47 percent of players say they have a crush on someone they’re playing Friends with right now. About one in three say they would be more willing to hook up with someone if they were good at the game, while 68 percent said they would date someone who beat them in it.

About one of four have exchanged their Words With Friends username instead of a phone number when meeting someone. And 44 percent say they have flirted with someone via the in-game chat. And one of three players say they have shown mercy to someone they loved.