LOS ANGELES — Final Fantasy is trying to be cute.

Square Enix wanted to make the world of its Final Fantasy role-playing game series more accessible to new and younger players, so it tasked producer Hiroki Chiba with creating a new game for the franchise. He is now heading up World of Final Fantasy, which as announced at the Electronic Entertainment Expo industry tradeshow this week. It’s coming to PlayStation 4 and PS Vita next year. It mixes fan-favorite characters and settings with two new protagonists in a simplified RPG that Square Enix hopes everyone will enjoy.

Here is an edited transcript of our interview, which took place alongside other games media members.

GamesBeat: What kind of game is World of Final Fantasy? How will people be playing?

Hiroki Chiba: The concept of this game is to befriend all these different creatures that have appeared in the Final Fantasy series  The basic play style is very similar to older Final Fantasy games. Within the battles you’ll be trying to collect those creatures.

Question: Does it use the Active Time Battle system?

Chiba: The battle system does use the ATB system, but I’ve changed it a bit to add something more like the current generation of the games.

GamesBeat: The stacking system looks neat, but I’d love any insight into how that works, especially now that we know it uses the ATB system.

Chiba: As you saw in the trailer, you can change the characters’ sizes — the main protagonist can go from a small size to a big one. At the bigger size, you can stack monsters on top of yourself. When you’re smaller, you can ride on the monsters. That formation will affect the stats and abilities you can use in battle. You can form the towers as freely as you’d like.

Question: Could you talk about the actual world of the game? Is this set in the world of the different Final Fantasy games? Are there towns and dungeons to explore? 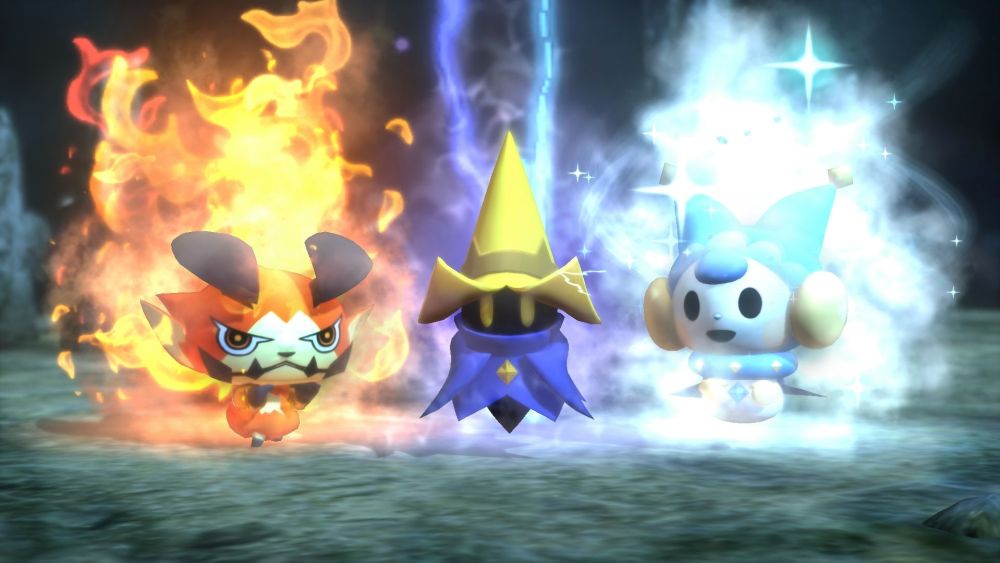 Above: A mage and friends show off some of World of Final Fantasy’s magic.

GamesBeat: Was the choice to go with something that looks like figures or toys—was that a nod toward making the game accessible to younger players? They look a bit like the recent Kai figures. Was that intentional?

Chiba: When we were creating the new IP, the producer, Mr. Hashimoto, came to me to talk about the newer generation that has some distance from the current Final Fantasy series, which is more geared toward a realistic visual approach. They’re more distanced from the property. When we started talking about this new version of the IP, we wanted to find a way to draw a younger generation to the world of Final Fantasy. Regarding Play Arts Kai, that was actually based on the character designs for World of Final Fantasy. It was all created for a mobile game released in Japan called Pictologica. I worked on the world view and scenario for Pictologica as well, so the designs were created for that game first and shared between the two projects.

Question: I wanted to talk more about befriending monsters. Is it similar to how Pokémon works? Do you let the monsters fight for you in battles, or do you interact with them in some other ways?

Chiba: Currently, the main way to befriend the monsters would be to battle them. There’s a gimmick or system within the battle that we can’t disclose right now, but you can use that capture or befriend those creatures. There are also different types of monsters that you’ll be able to get by clearing different storylines.

GamesBeat: You mentioned the systems being simplified a bit so that it is more accessible. What might classic fans be used to that they won’t see in this game?

Chiba: That’s a bit of a difficult question, because Final Fantasy titles have been trying to create something new every time. What’s recurring and what’s the same is always a bit different per title. But I can say because the image I had for the game system in World of Final Fantasy was the titles before Final Fantasy X. A lot of the elements will come from those titles. The battles are a little more intuitive than previous titles, just so newer players will be able to catch on easily.

Question: Can you talk about the overarching story here? Is there going to be the kind of intricate story we expect from Final Fantasy games?

Chiba: The overarching story of the game—the two protagonists are siblings. They came from a different world, a world of bigger people, to this world called Grimoire, a world of smaller people. I can’t go into more detail than that, but they were taken to this world of smaller people and the story will revolve around them. I personally worked on Final Fantasy VI, VII, and VIII, so I’m trying to aim for the volume of story that was in those games.

GamesBeat: Is this a party-based experience like those games, or is the player more on their own? Is there any multiplayer aspect to this, or is it strictly something you’d play by yourself?

Chiba: The battle system, regarding how many players are in it—it would be the two protagonists and the monsters that are in the party. As you saw in the trailer, it’s a total of six. I don’t know if I should say six people or six figures, but you can only use six of them to fight at once. As to multiplayer functions, I’m not sure if we should call it multiplayer at the moment or not, but because the game is going to be released for PS4 and PS Vita, we’re talking about creating a game system where players will be able to play with other people. 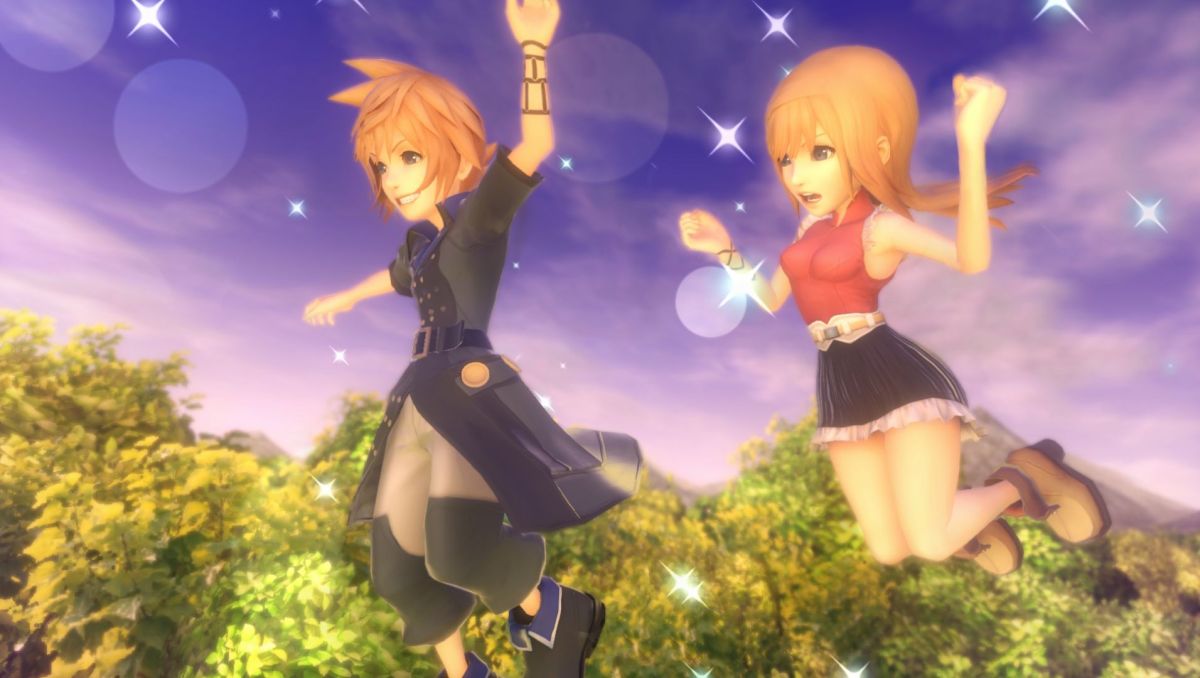 Above: It’s cutesy — but that may not be a bad thing even for longtime fans.

Question: This sounds like a game that older Final Fantasy fans would enjoy, with the classic combat and references to other games, but a lot of older Final Fantasy players might not be as interested in the art style. Are you worried about turning those players off because of the visuals?

Chiba: When discussions about the visuals came up, I consulted with Mr. Hashimoto about how to draw a new audience. It is a little different from the numbered Final Fantasy games, which are going toward a more realistic approach to the visual style. If those fans are looking for a realistic type of game, then it might not appeal to them. But World of Final Fantasy does have a lot of elements from previous titles and a lot of things Final Fantasy fans tend to like. I feel like it will still appeal to old and new fans. Also, to add some appeal for new fans, I asked Tetsuya Nomura to do the designs for the main characters. That’s there to draw the attention of current fans.

GamesBeat: It seems like the appeal is obvious for current fans. There are lots of recognizable themes and concepts. But I’m curious about how you’d connect the new fans to, say, a Chocobo. How do you explain what that is? How do you make this into a kind of gateway for them?

Chiba: Some of the monsters – not all, but some – are voiced. They’ll appear in the story, so players can empathize with characters from earlier in the series. We’re aiming to create something very detailed, so new players will be able to latch on to elements of the series.

Question: It reminds me of some of the mobile games that Square Enix has been putting out, like Record Keeper — games that collect the elements of all the Final Fantasy games and put them together. But this seems to be a deeper kind of game. Why did you choose to make this a Vita and PS4 game as opposed to a mobile project?

Chiba: In the trailer you may have seen Cloud and the Warrior of Light. But it’s a bit different from Record Keeper. World of Final Fantasy will not reflect on previous events. Those characters actually live in the world of Grimoire. They’ll be introduced in the storyline as characters that live in that world. It won’t reflect heavily the previous episodes in the series. The reason why we chose PS4 and PS Vita was because for PS4, we wanted the spec to be able to put in all those different types of creatures for you to collect and fight with. And we wanted to release on PS Vita because gathering all these creatures takes time. I didn’t want to restrict people’s play styles. I wanted players to be able to have the game on hand at any time, to take it outside. That’s why we selected the two platforms, and you can cross save between the two of them. Also, the game will be released in both digital and disc formats.