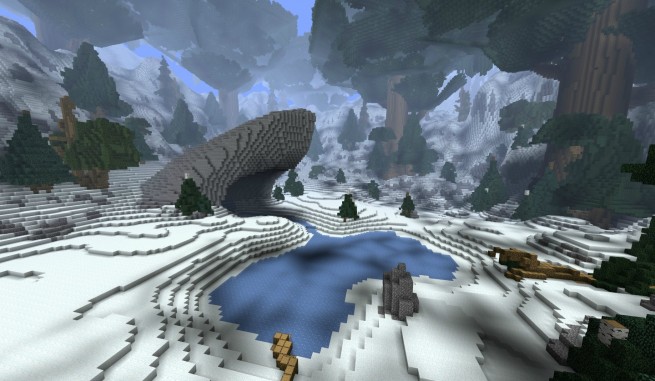 Back in February we interviewed a 27-year-old U.S. grad student known as “Ramses” about his project that would bring the entire virtual world of Blizzard’s massively multiplayer World of Warcraft to Minecraft. Eight months later, that project has now gone into open beta and Ramses has shared some before and after shots comparing the actual World of Warcraft to its Minecraft counterpart.

Ramses also shared some interesting details on how he approached “Crafting Azeroth”:

How does the conversion process work?

I developed software to convert the continents of World of Warcraft into Minecraft blocks using a process known as voxelization. The software converts everything in the game, including all the buildings and natural details, down to the individual tree stump. Once the parameters for the software have been set, the entire conversion process takes approximately 24 hours and requires no human intervention.

Prior to the conversion process, I needed to match textures from World of Warcraft to the appropriate material in Minecraft. For example, an object with a wooden texture might be converted into wooden planks, while an object with a mossy texture might be converted into mossy cobblestone. I created a special program to help do this assignment, but selecting materials for all 10,000-plus textures in the game still required many hours of work.

How large is the world?

The current version of the map spans approximately 275 square kilometers and contains over 68 billion blocks. The highest part of the world, the peak of Mt. Hyjal, stands more than a kilometer above sea level. Since the map exceeds the Minecraft height limit, the world had to be divided into seven altitude layers, each connected via a server-side plugin that teleports players as they approach the height limit. To be played locally, the map requires 24 gigabytes of hard-drive space.

Does the world include underground areas, like dungeons and caves?

Yes, the map includes all caves and dungeons that are not part of a separate instance. Loosely speaking, this means that if you can only get there by portal, then it’s not part of the map. So areas like Blackrock Mountain are freely accessible, but dungeons like Blackrock Depths or Molten Core are not.

Do you plan to convert any other continents, such as Outland?

Yes, work has already started on Outland and Northrend, and I plan to convert other regions such as Tol Barad and the Lost Isles as well. The conversion process can also be used on instanced dungeons, so they may appear at a later date, but they are not top priority right now.

GamesBeat wants to congratulate Ramses on his epic achievement and impressive methods. You can read more about Crafting Azeroth and download the beta here.