It’s safe to say at this point that I’m really enjoying Legion.

World of Warcraft’s newest expansion launched on August 30. The initial rush of newness is over, and I’m falling into more of a pattern with my questing. But the beautiful zones, interesting quests, and class hall progression is keeping me hooked. 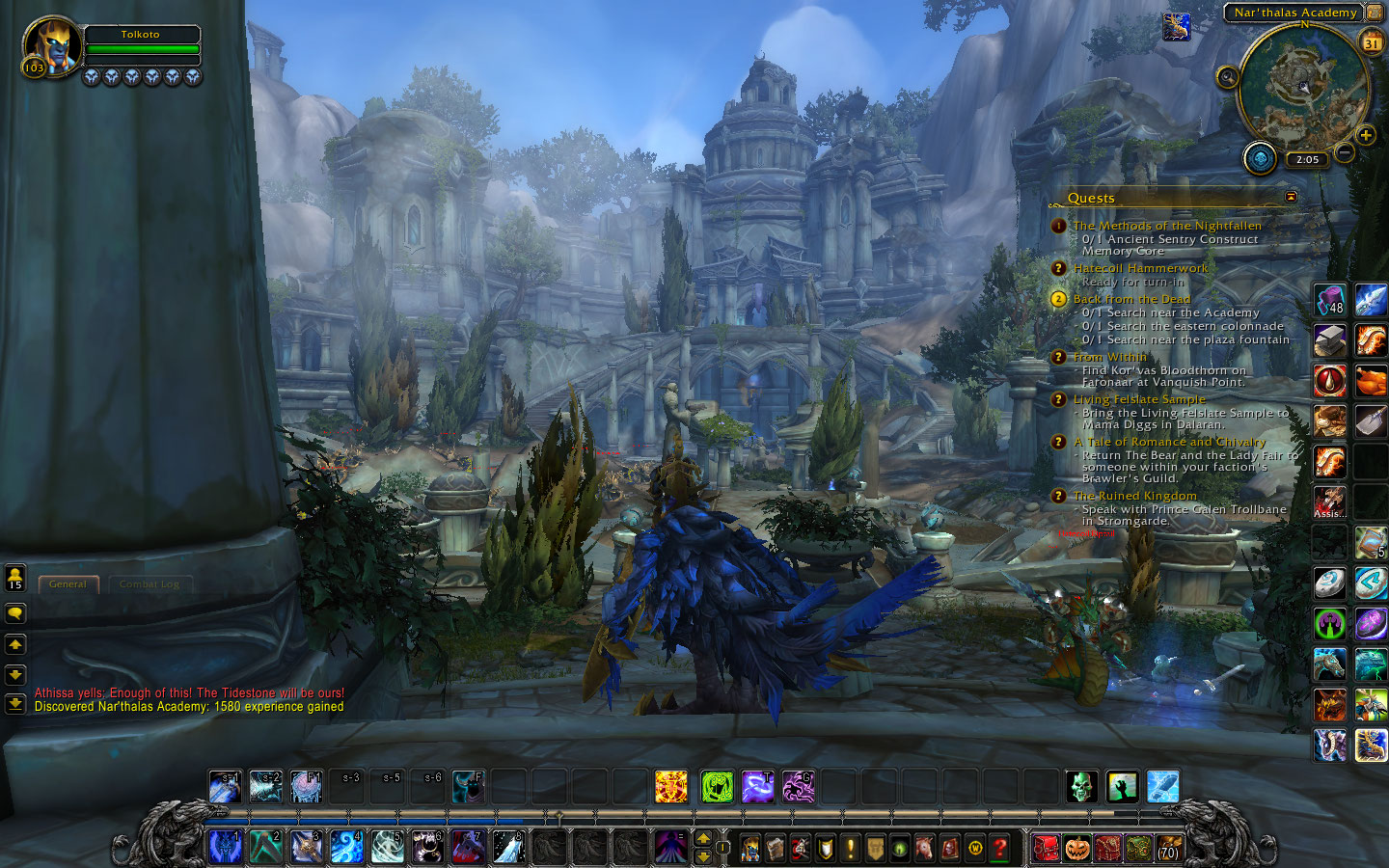 I picked Azsuna as my second zone, a place filled with elvish ruins and magical dragons. It was a much more Warcraft-y zone than the nordic Stormheim, but it was another great area to explore thanks to watery ruins and the appearance of important characters from Warcraft’s past (like the former queen of the Night Elves, Azshara). Once again, I was searching for a Pillar of Creation, which took me to all sorts of adventures. I had to save a group of mana-dependent dragons, infiltrate a magic school filled with ghosts, and even participate in gladiatorial arena run by a bunch of monsters that made me feel more like a Pokémon than a hero.

These stories didn’t feel as interconnected as the ones in Stormheim, but they were all memorable thanks to some interesting characters, like a mana-addicted elf (clearly voiced by Jim Cummings, the same guy who provides the vocals for Disney icons like Winnie the Pooh, Tigger, and Darkwing Duck …actually, this guy sounded a lot like Darkwing Duck) and the spirit of an elven prince despised by his people for standing against his evil queen and getting them all cursed.

Just like with Stormheim, treasure chests and mini-bosses encouraged me to explore. I also had to run another dungeon in order to secure the Pillar of Creation, this time called the Eye of Azshara. It took place on a storm-riddled island, with winds pushing my character around and lightning bolts constantly striking the ground. It was another fun dungeon filled with interesting bosses, including one that would throw spears at random players. The only way to avoid damage was to hide behind one of the bosses minions, making him take the hit for you. 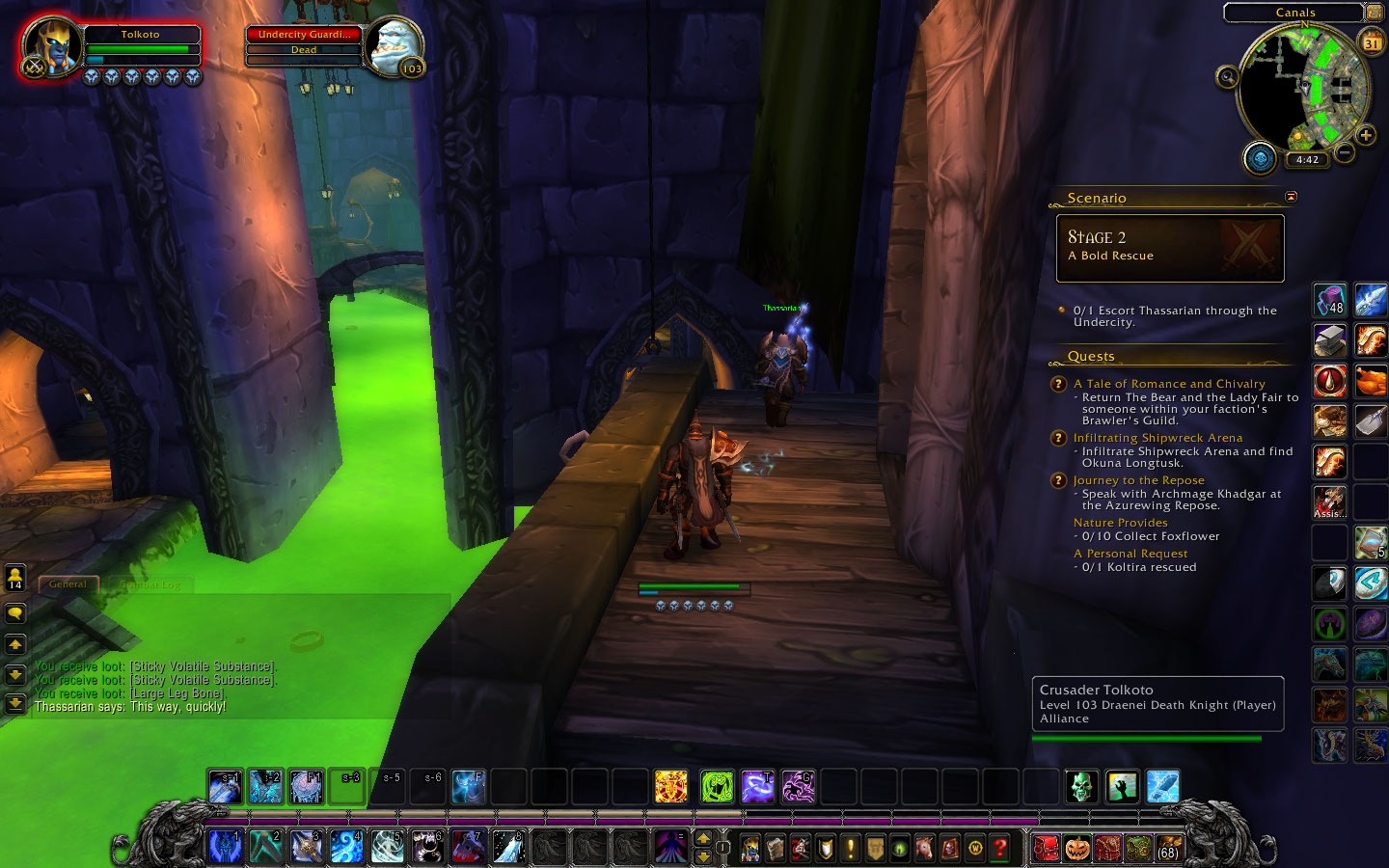 Above: What’s a dranei like me doing in Undercity?

I mentioned during my first journal how much I liked the class-specific content that came with earning my Artifact weapon and becoming the leader of the Death Knights. I’m happy to say that I’ve gotten to do more quests continuing this story. I love that I have so much narrative-driven content to explore that’s tied to my class.

And, again, it’s neat how many of these quests take you to older zones. One even had me sneak into Undercity, the capital of the undead. That race is in the Horde, so it’s normally a place I (as an Alliance player) would ever go to.

Completing these quests often gives me access to new content in my class hall, most of it revolving around class hall missions. 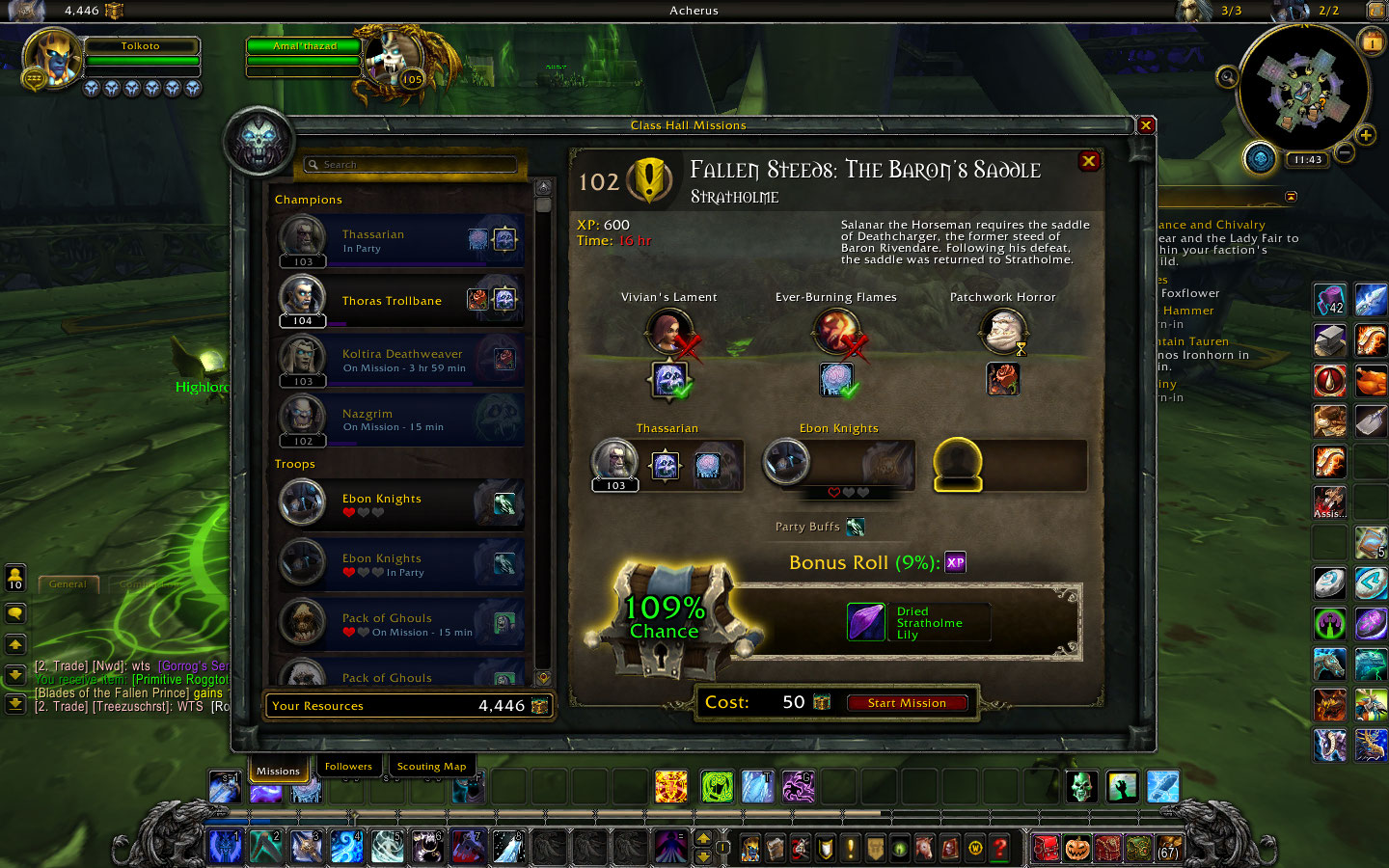 Above: This looks familiar.

These are similar to a feature from the last expansion, Warlords of Draenor, called garrison missions. Those had you sending out followers to complete quests for you, earning you rewards like experience points or gear. It’s a simple mechanic you’ll recognize as a feature in a lot of free-to-play game. You send followers on a mission, just wait for them to finish it, and then you grab your rewards.

It isn’t a complex system, but it does give you something to look forward to when you log in every few hours. As I built up my class hall, I was able to create ghouls and other creatures that increased my odds of successfully finishing missions. I was also able to create upgrades for my class hall, which let me choose between one of two perks (like increasing the odds for all missions to finish successfully or increasing the odds of finding rarer loot during them). 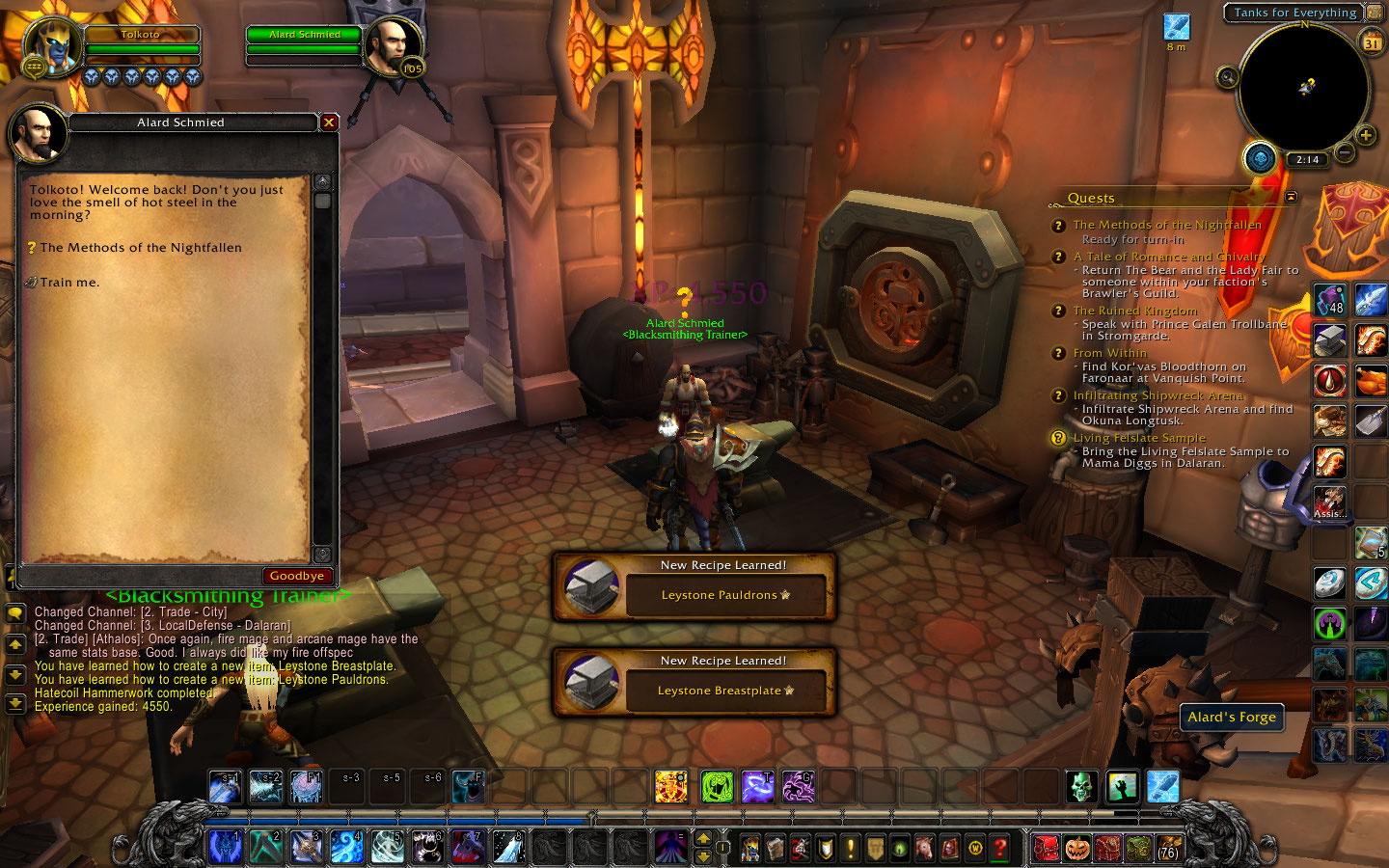 Above: Getting my smithing on.

I’ve also had fun working on my professions, specifically smithing. A trainer in Dalaran sends me quests and gives me recipes for new equipment, including some surprisingly awesome looking pauldrons. I like that Blizzard made something that’s usually mundane like professions some flavor by tying it into its own quest line with its own characters. 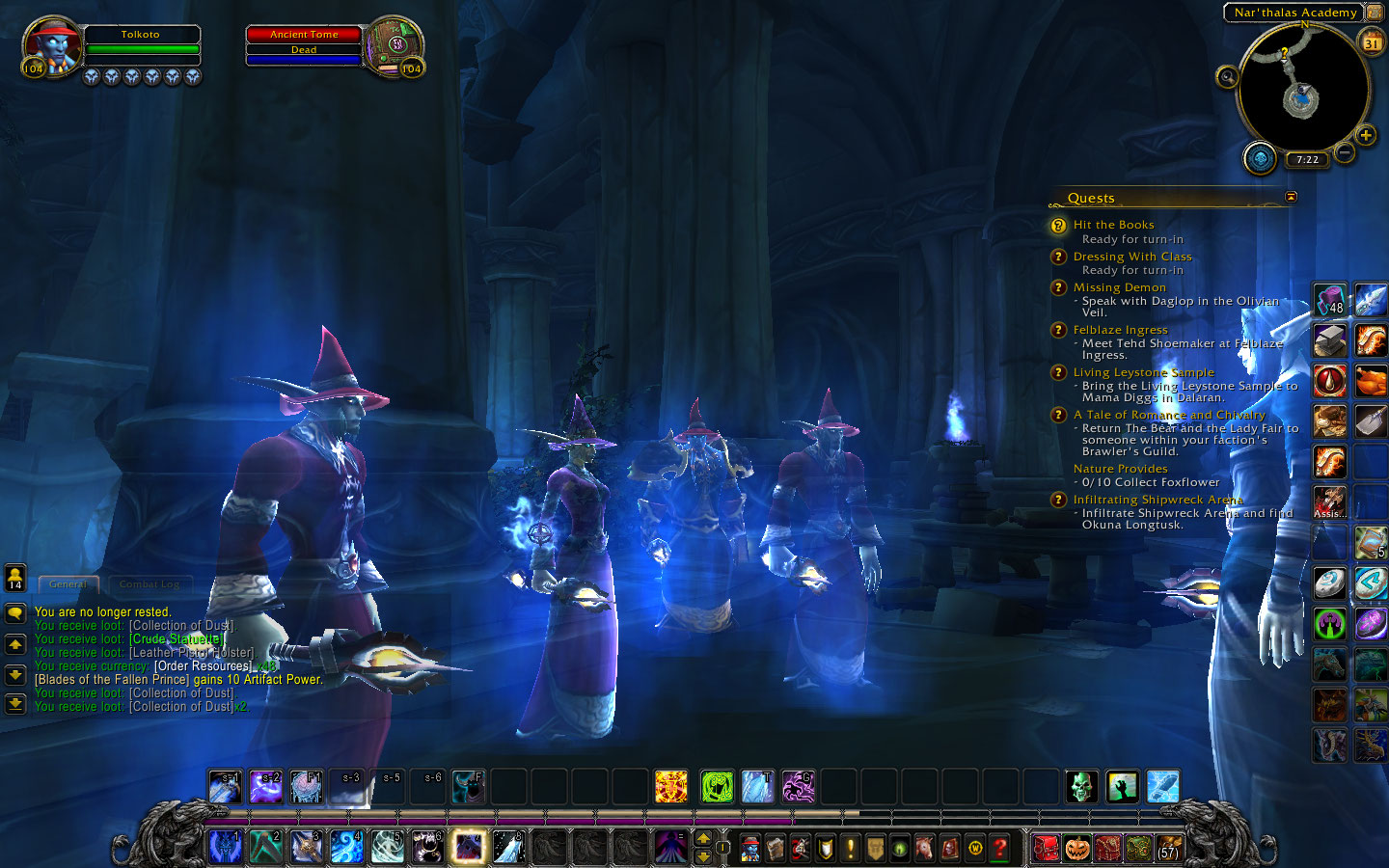 Above: Move over, Harry Potter.

I’m now level 106, and I have two of the Pillars of the Eternity. I still have a lot of questing ahead of me, and my Artifact weapon has a lot room to grow. I can even earn the other two Artifact weapons for my class at this point, which would open up even more content.

Even with as much Warcraft I’ve been playing this week, most of the Legion content lies ahead of me.