On my sixth day of playing World of Warcraft’s latest expansion, Legion, I’ve hit the level cap of 110. Despite it taking over 10 hours, the journey felt brisk thanks to the quality of the zones and quests. Of course, the game isn’t over now. In fact, I have more to do than ever. 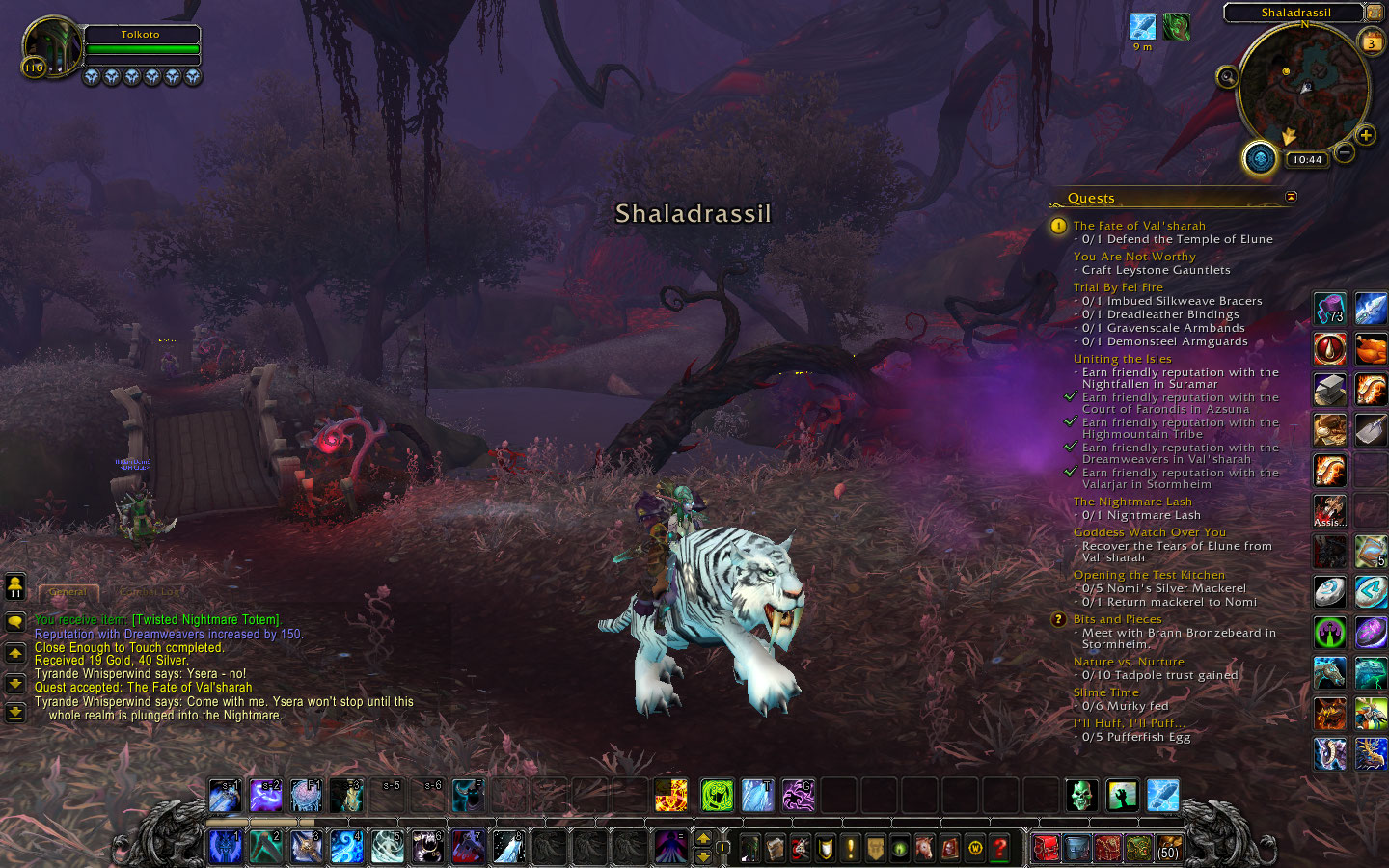 Above: Because who wouldn’t want to ride a tiger?

The rest of the quests in Val’sharah were a lot of fun for someone like me who knows a bit too much about Warcraft lore. Without spoiling anything, it featured a lot of familiar characters and a few surprises. Another quest chain also took me into one of the expansions coolest areas, an abandoned mansion filled with night elf ghosts. It reminded me of the Haunted Mansion from Disneyland.

The dungeon I had to beat in order to get the Val’sharah Pillar of Creation, Darkheart Thicket, was less impressive. It’s four bosses featured pretty basic mechanics, at least for a damage dealer like me. I rarely did anything but attack while standing to a bosses side. Darkheart Thicket didn’t feature any clever designs, and its corrupted forest aesthetic wasn’t as interesting as what I’ve seen from the other dungeons.

I’m also starting to get annoyed by all of the trash mobs in these dungeons. Trash mobs are groups of enemies that aren’t bosses, but your group has to defeat them in order to progress. They’re easy to kill and rarely give any rewards, hence the “trash” moniker. Trash mobs have long been a part of MMOs, but I don’t know why. I understand the desire to pace an instance so it isn’t just boss, boss, boss, end. But do we really need to waste this much time on useless enemies? 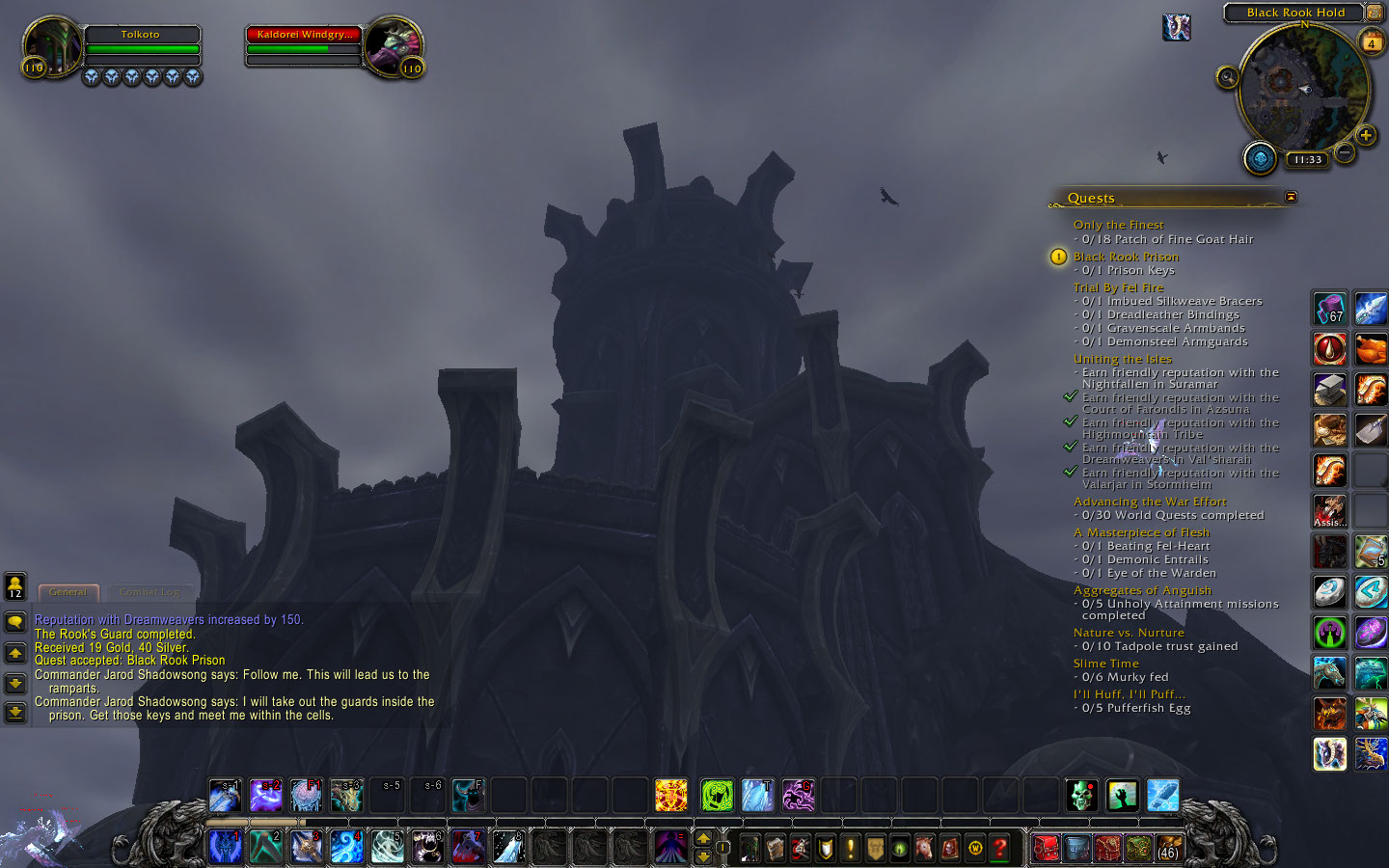 During my time in Val’sharah, I hit Legion’s level 110 level cap. Hooray! However, I still had plenty of quests to do. Not only did I have more tasks to complete in Val’sharah, but I still need to explore a whole other zone: Suramar. I also have quests tied into my professions (smithing and mining) that I need to finish.

I was also able to do another part of my class campaign. This time, I went to the Scarlet Monastery, which was a dungeon in the original release of World of Warcraft. Once again, I love seeing old areas like this re-purposed for new content. It’s nostalgic, but it also make the whole world feel alive. Otherwise, areas outside of the new expansion can feel stuck in the past. 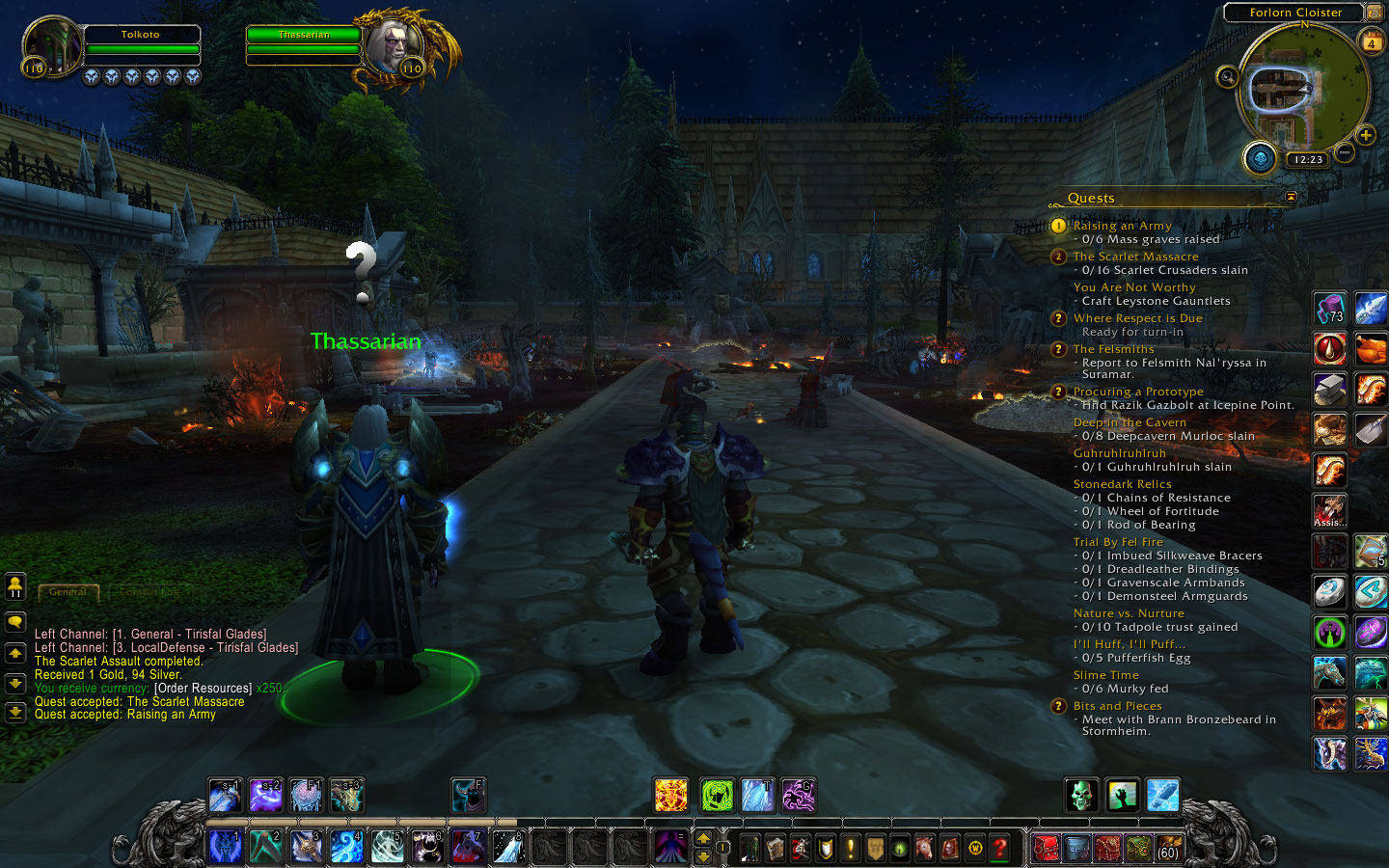 Above: Back at the Scarlet Monastery.

What do I want to do next?

I still have a lot of quests to complete. I have to level up my professions and continue empowering my artifact weapon. I could also begin running dungeons more regularly and hope I earn some nice gear.

But I could also shift my focus to another character. Specifically, I have a level 100 Pandaren Monk on the Horde side that I’d like to get to 110. Most of my friends are playing Horde characters, so if I want to run dungeons and raids with them, I have to either pay to have my death knight moved over to that side or level up my monk.

Playing through Legion as a different character and faction could be fun, but I would be experiencing a lot of the same content again. Also, splitting my attention between two characters will result in neither of them being as powerful as they could be.