When the Legion expansion pack launches next summer for Blizzard Entertainment’s World of Warcraft massively multiplayer online role-playing game, it will include one new class: the demon hunter.

At BlizzCon this weekend, GamesBeat arranged a special chance to play through the entire starting experience demo for that class, which took a little under two hours. It’s the first new class added to the game since monks came on the scene as part of the Mists of Pandaria expansion more than three years ago.

Much like the death knight class before it, you’ll start a little under the level cap when you begin as a demon hunter. Currently, players can reach level 100 in the Warlords of Draenor expansion pack; they will achieve level 110 in Legion. Demon hunters start at level 98 in their own special leveling zone: Mardum, in the Shattered Abyss.

I won’t go into the lore much here, but demon hunters are elves pledged to fight the invasion of the Burning Legion demons — by stealing their powers and using them against them. Demon hunters are a leather-wearing melee class, using glaives as weapons and agility as a primary stat.

The character customization screens for demon hunters are a bit different from other classes. You may choose between blood elf for Horde-faction demon hunters or night elf for Alliance. In addition to the usual options, you may customize your tattoos, your horns, and your blindfold. These stay with you regardless of what armor your character wears.

This means you won’t go visually helmless as a demon hunter; however, one of the “blindfold” choices offers glowing green, flaming eyes without an actual blindfold. Needless to say, I jumped on that one right away.

Other differences in character customization include skin color choices, which include some options with scales (and some with more or less muscle). Demon hunter garb is skin-baring for both genders, so you’ll be seeing a lot of those choices, and your tattoos.

The tattoos themselves are in fixed color-plus-pattern combinations. Most are bright evil green or purple, and the patterns themselves are vaguely tribal — not a surprise, given the similar patterns on Illidan Stormrage, the former Warcraft villain/boss that now leads the demon hunters in this expansion.

Horns range from tiny devil nubs to Illidan’s enormous swept-back curves to models that I referred to as Draenei (like the Alliance race of spacefarers), ibix, goats, and rams. I couldn’t find an option to skip horns.

Earring options were normal for elves, but I’ll note they look a little strange in combination with horns, since they’re all a little dainty. I chose to go without. Hairstyles and colors appeared to be the normal choices.

Racial dances are the same for demon hunters as for other elf classes, but the jokes and flirting emotes players can trigger with /silly and /flirt and /train commands are different and specific to demon hunters. You get the Illidari title for your character to start, though it’s unclear whether you keep it or whether your other, non-demon hunter characters can use it as well.

The starting gear for demon hunters includes a pair of glaives whose looks are modestly reminiscent of the legendary Warglaives of Azzinoth, which dropped from Illidan in the old Black Temple large-group raid dungeon.

Your starting armor mostly carries an item level of 660 in uncommon/green quality, and doesn’t cover much: Males are shirtless, and females wear a fairly tiny chestband. The overall look feels demonic, Illidan-like, and fun, and you’ll likely choose to hang onto this well-designed set for transmogrification of other armor later.

As Blizzard designer Jonathan LeCraft said in a BlizzCon panel Saturday: “They wear leather armor — not often on the shirt area. They take the weapons of the enemy: warglaives, fel magic, sculpted biceps — everything. And they look good.” 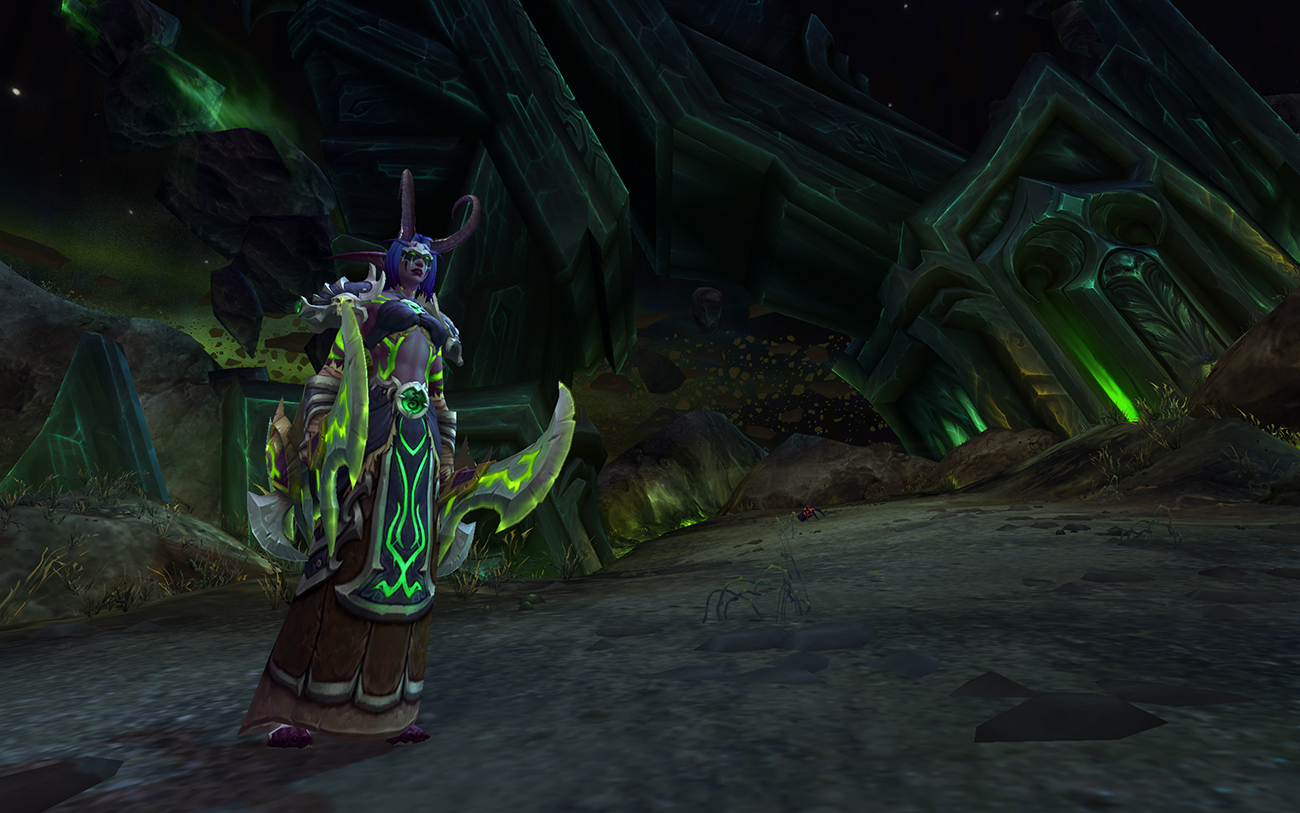 Above: Bikini: check. Tattoos: check. Time for a night on the town in Los Angeles — or a night fighting demons.

Next up: Go kill things

Questing through the starting zone doesn’t feel much different from any other, and most of the quests are standard “kill this, click on that” sorts of missions. Most of the exceptions come from quests designed to help you to learn your new demon hunter abilities, which you pick up gradually through the zone as quest rewards. It certainly didn’t feel as epic as the death knight starting area.

One early quest asks you to make an interesting decision, but it doesn’t appear to change the consequences of events in the zone. Hint: If you want to hear some extra dialogue from Illidan, opt to die when the time comes. You will take charge of some interesting forces in your fight to save the temple; I found this the most compelling part of the zone’s content, but it doesn’t feel too fleshed out yet.

You’ll notice some new quality of life improvements right away. Targets have actual targeting circles on the ground underneath them, making it easier to see which monster in a group you have selected. It has a metric ton of voice dialogue: Quest givers talk to you, and the humanoid creatures you fight verbally spar with you. Above it all, the region’s villains give voice commands to their crew, and you’ll see their heads pop up on screen with their dialogue so you won’t miss it.

Quests give item level 675 blue/rare quality goods, and rare beasts in the area deliver the same. You can upgrade all of these randomly as you earn them, similar to the quest rewards in the Warlords expansion. Unlike the death knight starting area, it appears you may not fully replace all your green-quality items before leaving; I made a point of completing every quest, bonus objective, and rare monster kill I could find, and I still had a few when finishing up the demo, which appeared to end at the end of the zone.

It was unclear whether Blizzard tinkered with the experience to level during the demo, but I suspect not, since I wrapped up the session close to level 100 and just before porting to see Illidan. Getting from level 98-99 takes 675,000 experience and I was half there after four quests and a bonus area. (Pro tip: Do the bonus objectives. They’re 10 times normal quest experience.)

You’ll definitely enjoy the changes to how loot and quest items drop from normal monsters. Warcraft has had a system in place for a while where rare monster loot is available to anyone who attacks the beast, but individual creatures are typically locked to the party or character that attacks them first.