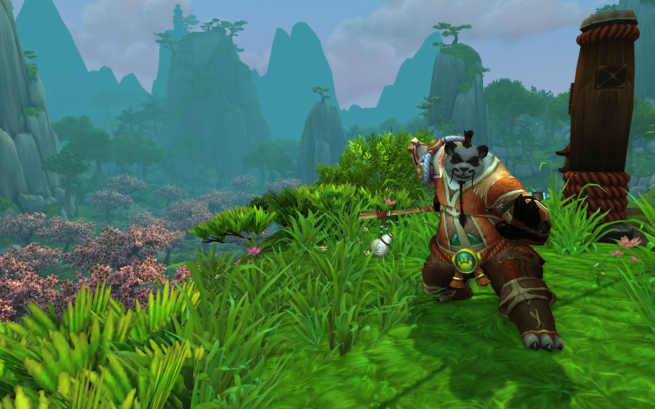 Update: Analysts at investment bank Brean Murray, Carrett & Co. are also weighing in on World of Warcraft: Mists of Pandaria’s financial impact, and they’re painting a rosier picture. They believe the expansion pack will be a key driver of publisher Activision Blizzard’s third quarter 2012 revenue growth.

“We  think  recent  reports  of  weak  retail  sales  for  Mists  of  Pandaria  may  fail  to reflect a channel shift toward a greater percentage of digital sales,” they said.

“More than 1 million people bought premium subscriptions, which bundled a year-long subscription with a copy of Diablo III. We look for the premium subscribers to not only pick up the expansion but for a significant portion of them to download it through the Battle.net platform, which should offer high margin revenue.”

Brean Murray estimates 4.5 million units of Mists of Pandaria will be sold in the third  quarter despite competition from free-to-play titles and NCSoft’s massively multiplayer online role-playing game Guild Wars 2, which has sold over 2 million copies. It also expects subscriber numbers to increase from 9.1 million to 9.8 million by the end of the third quarter.

GamesBeat has contacted Blizzard about this story and will update if there is a response.

Original story: It looks like it’s going to take more than kung fu fighting pandas to save Azeroth.

Sales of the World of Warcraft: Mists of Pandaria expansion have been disappointing, according to investment bank Lazard Capital Markets. The fourth expansion for Blizzard Entertainment’s massively popular online game has sold between 600,000 and 700,000 copies at retail since its launch earlier this week, Lazard estimates.

Historically, each new World of Warcraft expansion has outsold its predecessors, Lazard said, but sales of Pandaria are down 60 percent from the previous expansion pack, Cataclysm, which has sold 3.3 million units since its launch in December 2010. While these figures don’t take digital market performance into account, Lazard analyst Atul Bagga believes Pandaria’s digital sales won’t make up for its poor retail performance.

A drop in subscription numbers is a possible explanation for Pandaria’s struggles. Back in August, publisher Activision Blizzard revealed World of Warcraft lost over one million subscriptions in the last fiscal quarter.

About 25 percent of Activision Blizzard’s revenue comes from World of Warcraft, along with 50 percent of its operating income, which has Bagga concerned about the game’s continued longevity.