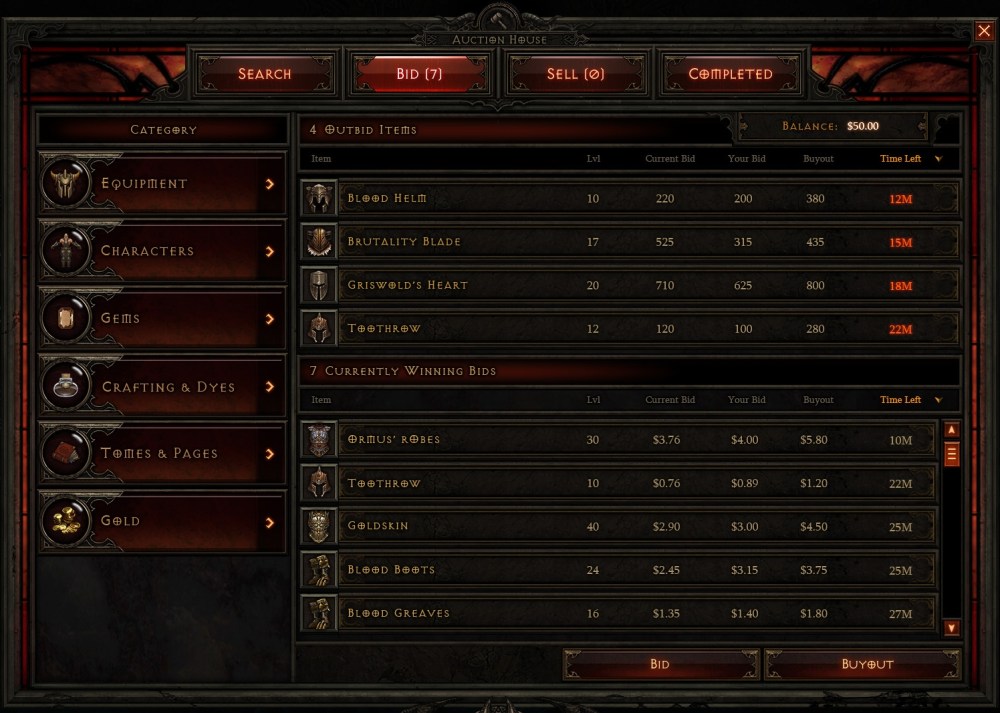 Above: Diablo III had two auction houses, one for gold and one for cash. Both infuriated players, because high-level item drops were extremely rare.

Even though Blizzard’s action-adventure Diablo III “is a very different game,” Hazzikostas said they’re keeping the example of that game’s real-money auction house in mind as they design this system.

Diablo III’s real-money auction house permitted players to post items for cash bids. It became the dominant feature of the game, the only place most people could get the best items even after extended gameplay. Some players made a lot of money.

But it was a disaster. Players responded viciously in forums and reviews, and its peer rating on sites like Amazon steadily dropped. Just under two years after the game’s release, the company cancelled the real-money auction house, boosting the individual drop rate of gear in-game instead.

“In Diablo III, gold and the items that were being transacted there were really very direct analogs for power. That’s what was changing hands. The very best items in Diablo were what was on the auction house,” Hazzikostas said.

“World of Warcraft … since day 1, one of the distinguishing features of our game and the game economy was that the best items in the game and the most powerful items are only obtainable through personal exploits, whether you are earning conquest points in arenas or rated battlegrounds, or whether you’re killing dragons in a raid and taking a flaming sword off the dragon’s corpse. You have to earn that yourself, gold won’t get you those things.”

Blizzard may change some high-end items 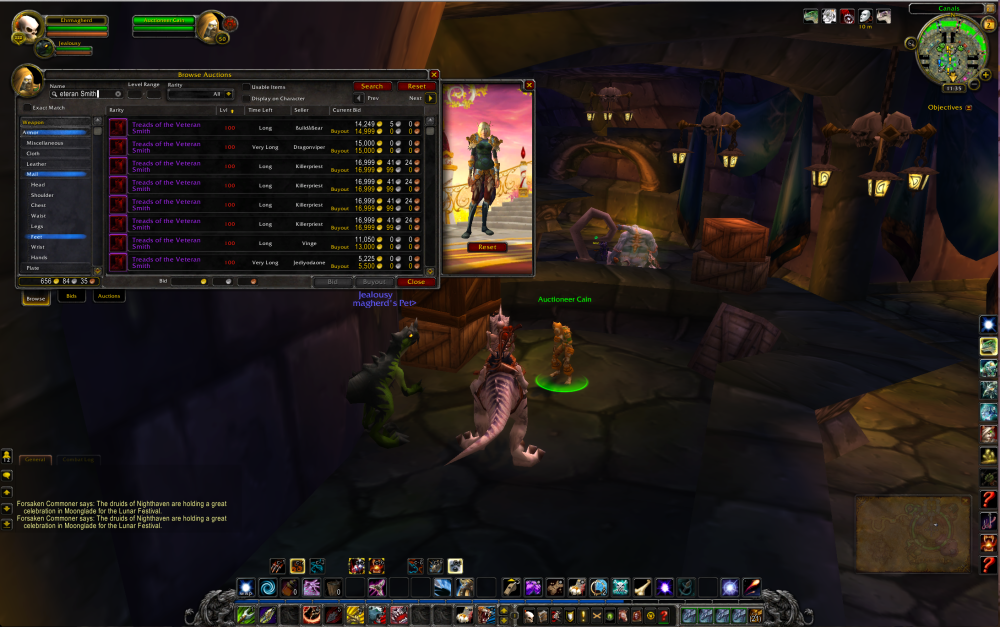 Above: These boots on the auction house are bind-on-equip items that drop from the game’s Blackrock Foundry large raid dungeon.

But plenty of Warcraft items currently for sale for gold in-game do boost player power: crafted items and their upgrades, select “bind on equip” tradeable items from the highest levels of large-group raid dungeons, and the like.

WoW’s Black Market Auction House offers high gold auctions of extremely rare items, though those are more likely to be pets, mounts, and cosmetic items and less likely to be things that add to player performance.

“There are a handful of items that do fall into that category,” Hazzikostas said. “I think honestly this also leads us to re-evaluate some of those things that are [bind on equip], some things at the Black Market Auction House, and the level of item that becomes available there.

“I think it’s important to us that we do adhere to that original ideal: that the strongest items in World of Warcraft are the ones that you earn yourself through direct accomplishment, and aren’t buying from another player.”

No playing the market

Any time a game links real-world cash and in-game currency, you face the danger of fraud and exploits. Hazzikostas said Blizzard has taken a number of steps to reduce it here.

To try to prevent gold farmers from simply putting their farmed gold toward game time they could use to undercut the system, or to prevent people from turning the tokens into a virtual currency market,  Blizzard binds tokens to players at every step from purchase through to use, making them useless to trade.

“We think there will be buyers and there will be sellers. It’s not really possible or sensible to be both. When you purchase a token off the shop, there is literally only one thing you can do with it: You can list it on the auction house for sale,” he said. “You can’t use it yourself, you can’t mail it, you can’t give it to a friend, you can’t destroy it. When you buy it off the auction house, the only thing you can do is to consume it, to add 30 days of game time to your account.”

The way the transaction is structured also reduces the opportunity to play the market to make the maximum amount of gold or cash.

“If you were trying to play the market in the sense of, you think the price might be going up or going down, your only choice really is to abstain or not to abstain,” he said. “If you’re thinking of buying a token and listing it for sale, and you think they might be going for more gold next week, okay, wait a week before buying it and listing it. That’s completely your prerogative, and that’s not really abusive. That’s just a healthy market.” Above: Gold farmers used to routinely scam players out of gold by offering bogus codes for rare mounts like this spectral tiger.

Hazzikostas doesn’t expect the tokens themselves to have much of an impact on the in-game market, since it’s players trading gold rather than botting to create new piles of it, as gold farmers do. He also doesn’t expect to see much reduction in the number of goods for sale if the gold farmers drop out, since they primarily dealt in pure cash anyway.

“Because we ban them very regularly and very frequently, they’re not typically farming items or creating items they can sell, because they’ll typically be banned before those items can be sold,” he said. “They have a short life expectancy. The hope is that their life becomes harder.”

The system may not launch in all regions at once, giving Blizzard the chance to intercept and fine-tune any issues. Players at both ends of the transaction will have protection: If a sale was fraudulent, the company will not “repossess” the token from the buyer, and vice versa for the gold.

Buying will likely be immediate, but selling may come with a small delay, he said. “There’s going to be a fraud review on our end before the transaction can complete on the auction house.”

People with established account and credit card histories will have a faster experience. Others may experience a minor delay. Blizzard may also institute some limits on the number of transactions, which are yet to be determined.

“The limits largely exist as fraud protection,” he said. “You probably don’t have a legitimate reason to need 30 years of World of Warcraft.”

Could the new system pave the way for other types of items that are available and visible for sale across an entire country, rather than just a realm?

“Potentially, yes. We don’t have any specific plans at this point,” Hazzikostas said. “But at this point, at the end of the day, a commodities auction house is potentially a commodities auction house. If we wanted some herbs or cloth or ore to be region-wide in the same way, we now have the ability to do so. We’re not necessarily going to jump right into doing that, but it means that we could.” 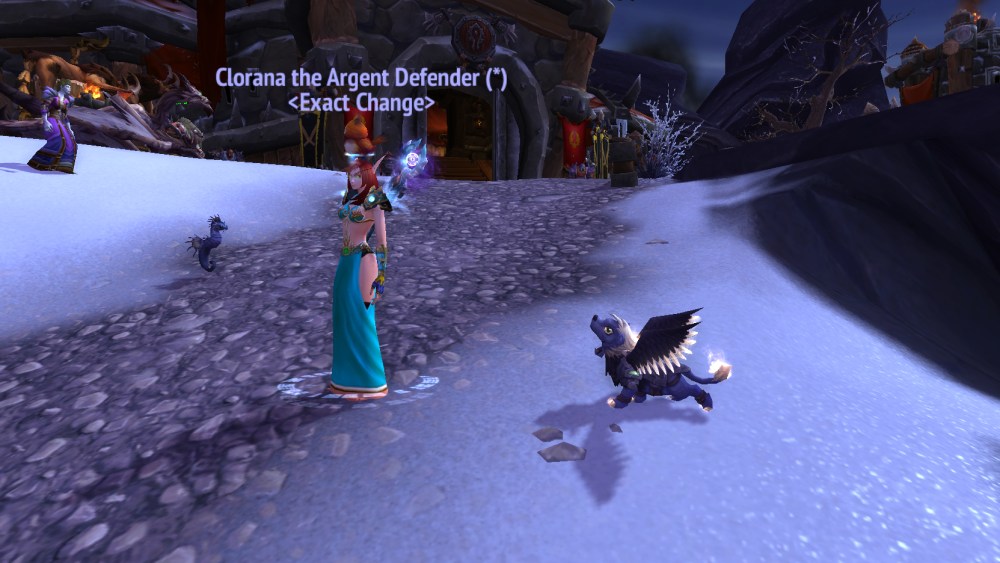 Above: That cute little guy with the wings is the Guardian Cub in-game pet, one of Blizzard’s experiments with an item that can be bought for cash and sold for gold.

The same wait-and-see attitude holds for new items players can buy with cash and trade for gold. Blizzard experimented a bit with that concept in the Guardian Cub, a pet that sold for $10 in the company’s store that could be traded freely in game or sold for gold as part of a normal auction.

While the new system offers the capability to do that more directly, Hazzikostas said the earlier experiment wasn’t exactly an unqualified success. The cub was removed for sale last summer after a few years on the market.

“There’s something to be gained in simplicity and clarity on focusing on a single commodity. It’s more liquidity, it’s a smoother experience.”

Players will render the verdict

Blizzard says they’re trying the new system out for a couple of reasons, only one of which is to cut the legs out from under grey-market gold sellers.

“What we’re trying to do is ultimately about freedom and increased access to the game,” Hazzikostas said. “It’s about giving players a new way to play the game and access their game of choice and how they want to pay their subscription on a month-to-month basis.

“At the same time, we see it as a very powerful arrow in our quiver in the ongoing fight against the bad guys, who are the third party gold sellers, the gold farmers who are compromising accounts and pushing this illicit market forward.”

“I wish I could tell you. We certainly anticipate a very frenetic first few days,” he said. “There’s a lot of pent-up demand on both sides of the equation.”