The latest World of Warcraft expansion finally, after 10 long years, makes you the star.

The Warlords of Draenor expansion pack for the megapopular massively multiplayer online role-playing game launched last week, offering players a new take on the decade-old game. Already, subscribers have jumped by a third to more than 10 million as a result of the launch, which adds a pile of new content and a maximum level of 100.

Draenor gives players a chance to return to WOW’s roots: Stirring storylines involving some of the series’ best characters, a world at war, and a new setting that centers on one of the game’s first races, the Orcs. Even more important, it’s the first expansion in the game to put you in the position of not a lowly adventurer or hero but a leading commander of your faction’s forces.

Despite some technical woes and quirky systems, this is the expansion that pulls Warcraft into the modern gaming world, with graphics and gameplay that compete with new titles.

Large group raid dungeons and the new competitive player-vs.-player (PvP) season won’t open until December; we’ll have another story on those then. 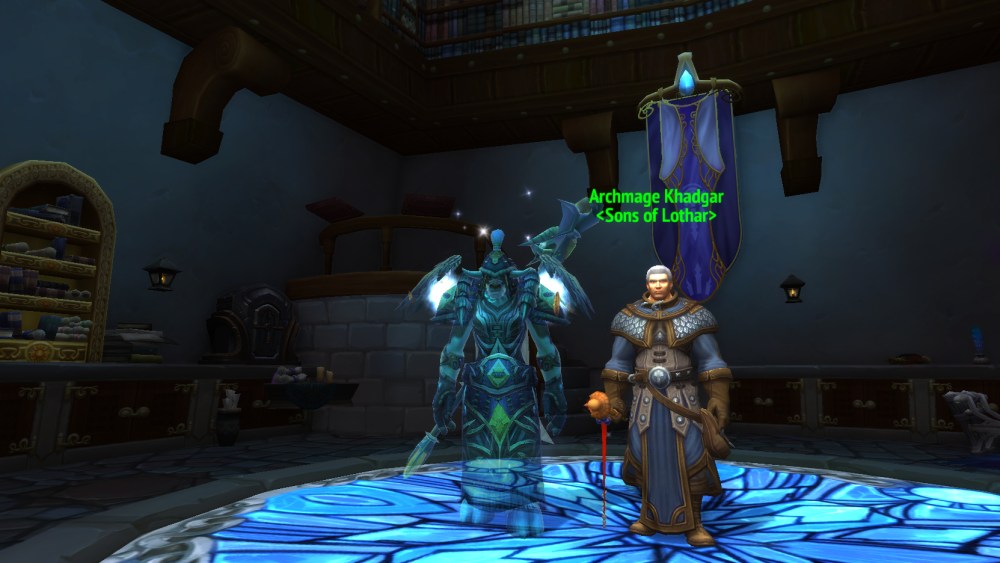 Above: Me and my new bestie, Archmage Khadgar.

You, the conquering hero

In previous chapters, you were a lowly adventurer (or later, a generic “hero”) when you interacted with NPCs. This time around, they call you the leading commander of your faction’s forces, snap to salute when you enter town, and offer you respect when you talk with them.

Khadgar, a hugely powerful archmage who plays a central role in the expansion and the WoW storyline, at one point told me in the new questline for a legendary item that I was possibly the most impressive paladin he had ever worked with. (Sharp-eyed readers will note the picture above is of a druid. I leveled both to 100 in doing this review.) It sounds goofy, but I’ve interacted with this character for a decade now, and he’s been featured in storylines that included some of the most overpowered, impressive characters in Azeroth.

The result is surprisingly affecting, even for someone not that into the lore. Players who have been in the game for a long time will feel like they’re finally getting their reward for years of destroying the world’s greatest villains. New players will feel like the world rotates around them. 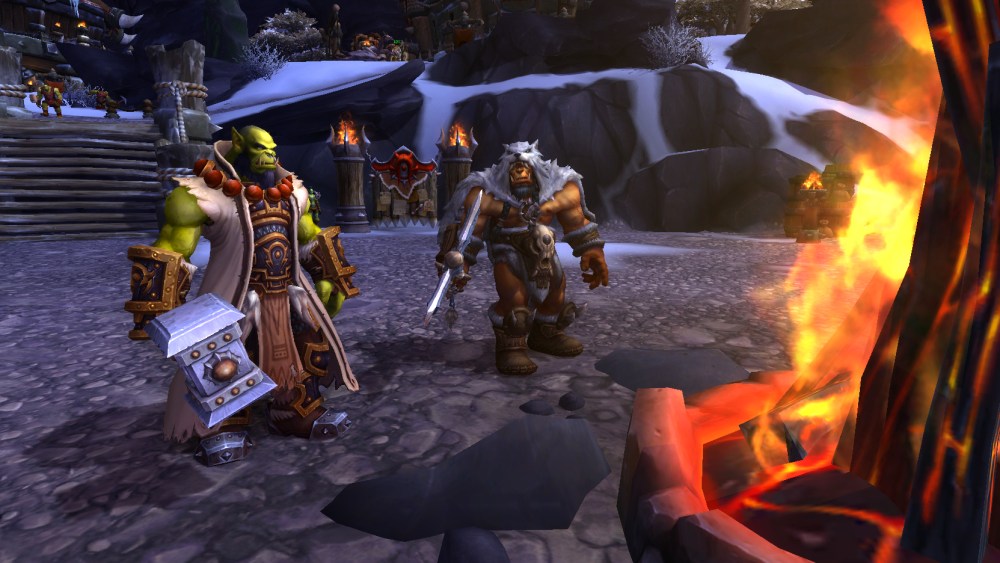 Above: Former Horde Warchief Thrall and Frostwolf Chieftan Durotan — both important figures in WOW lore — hang out by the fire in your Horde garrison.

An expansion based on 20 years of Warcraft lore

Warcraft is known for terrific stories, and all of them are on display in this expansion. It’s a time-travel/multiverse plot (groan), but WoD manages to avoid making it cheesy, instead reveling in the opportunity to put you in the middle of some of Warcraft’s most dramatic moments — and change them, since you’re in a parallel world.

Garrosh Hellscream, the villain of the Mists of Panderia expansion, escapes and uses newfound power to pull open a portal to an earlier time in the Orcs’ history. He saves his father from death and unites the tribes on a mission of domination.

As a player in the Horde faction, you work with the Orcs who have turned Garrosh down, along with other neutral factions, to put an end to his Iron Horde invasion. As an Alliance player, it’s another opportunity to battle your hated enemies.

Quests lead you through the stories of the expansions through the different zones, and virtually every one involves a prominent figure from Warcraft’s past — and your past, if you’ve been playing WOW for a while.

It feels epic and important, and Azeroth reflects the changes you make — and these are permanent. Each zone ends in a climactic battle, a minimovie of cutscenes, that tie together what you’ve done so far. In some cases, they brought me to tears. 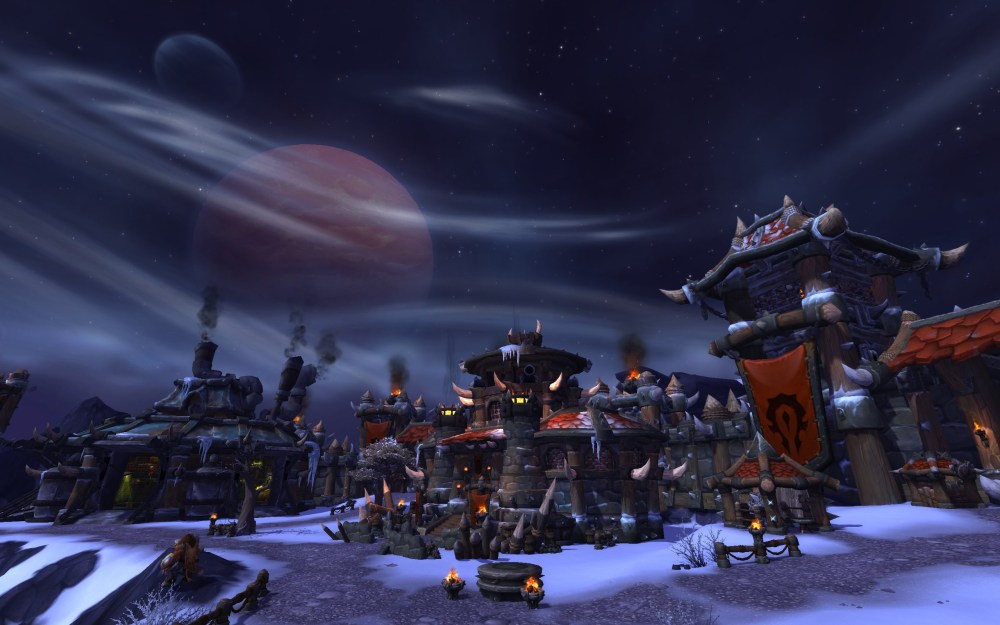 Above: A fully upgraded Horde garrison is a beautiful thing.

This is my town, scrub

Within the first couple of hours of play, you found your garrison, a small city that acts as the hub for the rest of your Draenor adventure. You can choose which buildings go into the limited plots, upgrade your city and its contents, and work on tradeskills, getting mounts, gathering, and a host of other activities.

In each zone, you choose an outpost building to construct there, adding to the perks you get. It feels a lot like the classic Warcraft III real-time strategy game — right down to what the NPCs say to you when you click on them. Outpost buildings are constructed in the zones themselves, rather than in your garrison, and offer you benefits specific to that area. So in the Spires of Arak, for instance, if you choose to build the Brewery — our recommendation, at least while leveling — you’ll get a 20 percent boost to experience points you earn in the area and a free, second hearthstone to port back to that outpost from anywhere in the zone.

As you quest through the zones, you earn the loyalty of followers, NPCs who will come to live in your garrison. You can send them out on missions that earn everything from gold to gear — even legendary quest items. They rise in level and power as you use them, and you can get them better gear to wear.

Depending on the buildings you choose, you can assign followers to them for extra perks. Assigning a follower to the Forge, the blacksmithing building, makes it so that your character doesn’t have to pay for durability damage as you adventure, for example, and increases the production of rare crafting materials.

I did an extensive preview of garrisons during the expansion’s beta test. I didn’t know then just how fun managing my horde of followers and building work orders would become. I’m not the only player hoping that Blizzard will include follower missions in the mobile app. 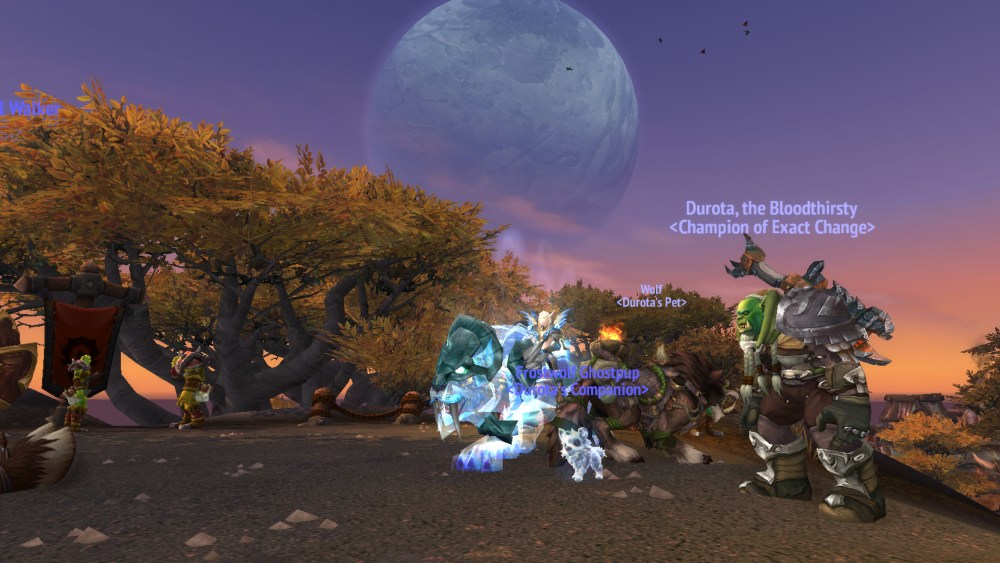 Above: New character models make everything look good, including this tiny spectral wolf you can create using archaeology skill.

Graphical updates that also make it easier to play

Draenor brought with it a massive graphical overhaul; WoW no longer feels like a decade-old game. It’s still slightly brightly colored and cartoony — that’s Blizzard’s style — but the characters, monsters, and NPCs are much more detailed, and the landscapes are gorgeous. Small changes also make things more usable: Mousing over something you can interact with highlights it, for example.

The result is a much more immersive, beautiful experience. 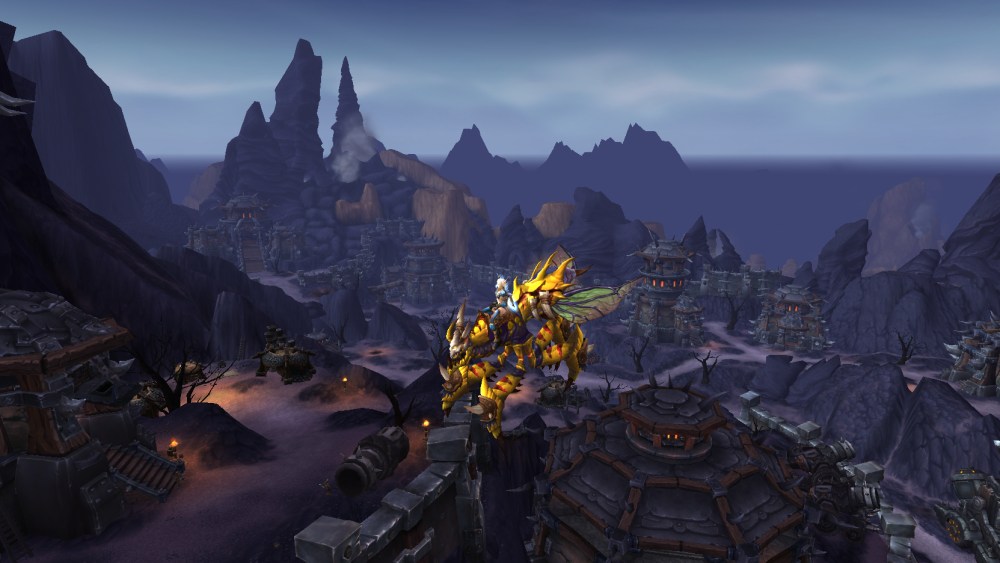 Above: This is just a tease: Players can’t fly their own mounts in Draenor zones (but plan ahead so you take good-looking automated flights like this one).

I played through the eight new dungeons as a damage dealer, as a healer, and as a tank. All featured more fighting and less talking than Mists of Pandaria expansion versions. Some are innovative: The level 100 Grimrail Depot takes place almost entirely on a moving train. In Iron Docks, you send giant iron stars, rumbling wheels of fiery death, through hundreds of enemies.

Many dungeons feel bigger than they ever have before, taking place outside, with wide landscapes, things that feel surprisingly rare in WoW’s history.