The game debuts for $35 on the Windows PC on the Epic Games Store, PlayStation 4, and Xbox One. Pitt’s character isn’t in the game, but it does carry the license from the popular Paramount Pictures property, which featured swarms of terrifying and fast zombies. I got a look at the Jerusalem level of the game in a four-player co-op preview, and I also played the multiplayer version of the game in a four-on-four match.

The best thing about this game are the swarms of zombies that come at you in waves. Like the upcoming Days Gone, World War Z features hordes of more than 5,000 zombies that act as a kind of hive mind, building bridges with their bodies to scale walls and span gaps. Your job as the player will be to team up with other co-op players and mow down as many zombies as possible. If the zombies get at you for more than six seconds, you’re dead. 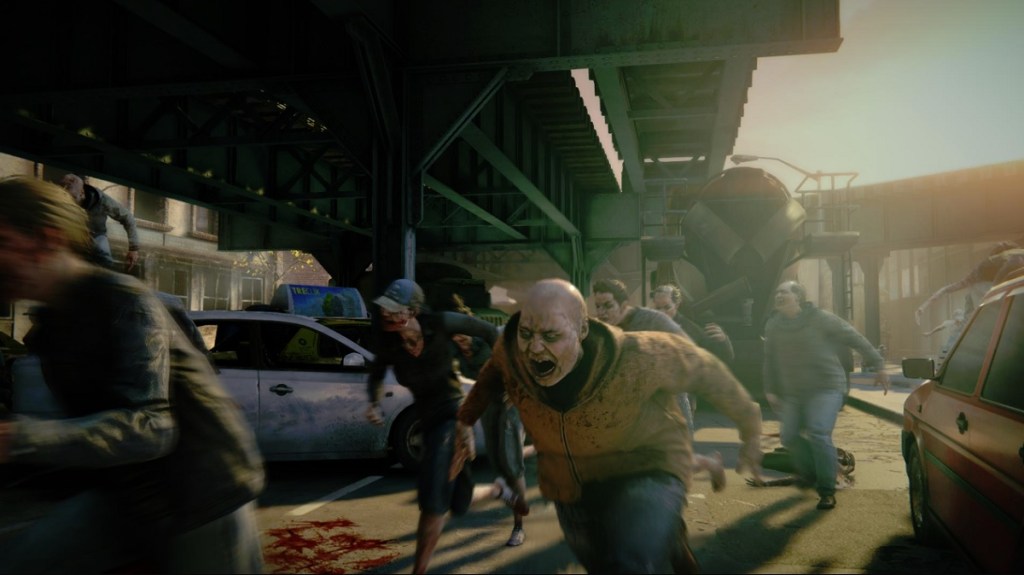 It’s one of the games that is trying to fill the gap left by Left 4 Dead, which Valve has largely abandoned. I played a lot of the sci-fi co-op shooter Earthfall last fall, but it failed to get many fans (rightly so, as it was quite buggy). That game taught me that developers have to hit some pretty high expectations, as co-op games aren’t easy to pull off.

“We’re an independent developer, right? We’re fairly large for an independent, with about 450 developers in our two primary core studios, but we still don’t have the budgets of an EA or an Activision to go out there and market a new title, a new brand, and bring awareness of something that doesn’t already have recognizable staying power,” said Saber Interactive CEO Matt Karch said in a recent interview with me. “From our perspective, grabbing a license, especially one that fits the game we wanted to create, was the perfect way to get that awareness without having to spend tens of millions of dollars to make our potential audience aware of the franchise.”

“The flip side, though, is there is the skepticism about licenses. And I agree that there’s probably also a skepticism about zombie games. But this is a different type of zombie game,” Karch added. “We’re huge fans of Left 4 Dead, and I think that comes across in some of our videos. We wanted to create an experience which mirrored that experience, or maybe the best way to put it — that was inspired by that. We didn’t see any more Left 4 Deads in the pipeline. We thought this was an opportunity to create an experience we loved that would kind of be an evolution of that.” 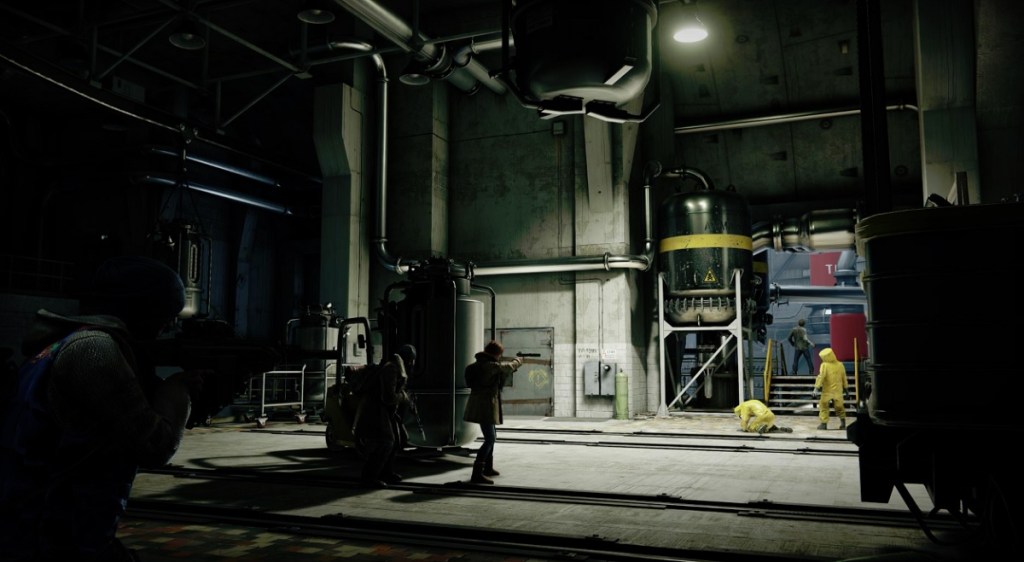 Karch said that the team (which has been making games like NBA Playgrounds 2K for 18 years) created what they call the Swarm Engine to render zombies on the move in huge numbers. Last month at the Game Developers Conference, I played the Jerusalem level of the game with the developers. They were expert players who knew what they were doing, and they communicated well. That was very important in our playthrough.

The Saber team created their own stories and characters, keeping only the general universe of the movie. The co-op campaign story focuses on four cities — New York, Moscow, Jerusalem, and Tokyo. There are multiple episodes and environments. The individual characters are not locked to a class, since the episodes and storylines change.

“Because we change episodes and characters, we didn’t want to have to restart every single team, so the player will choose a class and no matter which character they play with, they’re going to build experience toward that class,” said Oliver Hollis-Leick, creative director at Saber on World War Z, in an interview with me. 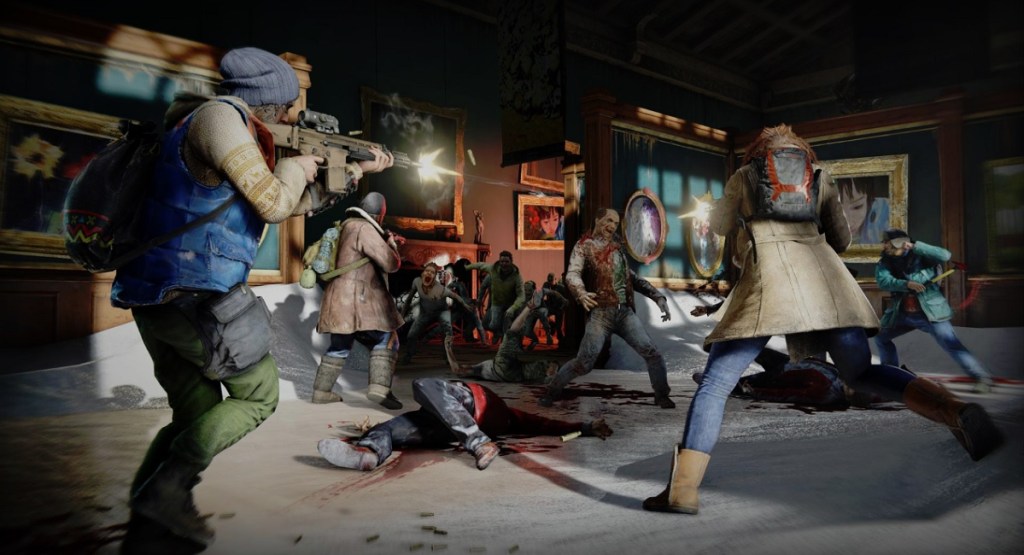 The player will choose a class: Gunslinger (assault), Hellraiser (explosives), Fixer (who has special pickups and passive skills), Medic, Slasher (melee), and Exterminator (crowd control). You can customize a weapon, and the more you use it, the more you can unlock various powers related to the weapon.

Then you can play different characters to build up experience toward that class. I played as a Gunslinger. The devs told me that the key to the game is to stick together. It’s a short play session, and if you go off exploring on your own, you’re going to get caught out in the open.

There isn’t much storytelling or a lot of cinematics, as you’re likely to see in Days Gone. But you do get to see the universe of World War Z from the perspective of multiple characters and scenes, said Hollis-Leick.

The controls were simple. I played with an Xbox controller on the PC, and the left bumper was a grenade, the right bumper was a machete, and the buttons did things like switching weapons. You push the D pad down to heal yourself. An orange arrow on the minimap shows you where you’re supposed to go. Blue circles indicate where your fellow players are.

We got into the shooting right away. Fortunately, we were all pretty good shots. We raced along a cliff area, shooting zombies as we went. They were fast, but with four players we were pretty powerful. Along the way, we had to do things like breach doors. I happened to learn early that you don’t want to shoot a Hazmat zombie in the body, as he will explode into a toxic cloud.

Once we reached one of the main mission areas, we had 90 seconds to prepare. During this pre-mission preparation, you have to set up traps, barricades, turrets, and sentries. As you do that, you have to find as much ammo as you can from boxes. Those box locations change from mission to mission. The yellow crates have defenses in them, and other boxes have chain saws. I looked for grenades. 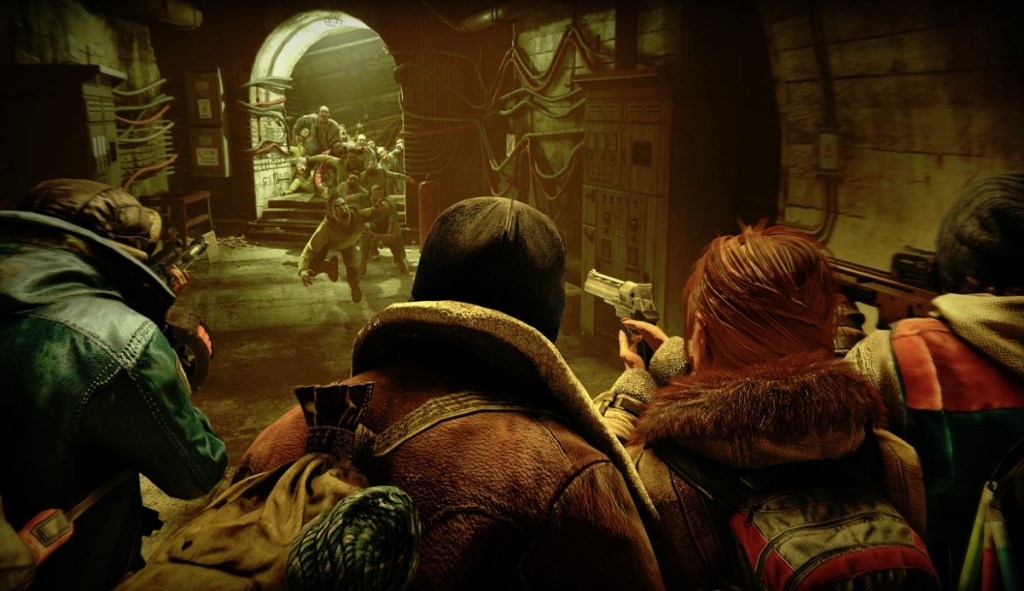 We were in a big platform shaped in a semicircle, with the undead charging through holes in a dam. The area on the ground was a big killing ground. At any given time, there are 500 to 1,000 zombies attacking. This scene felt more like the latter.

The zombie swarms behave like a real crowd, getting stuck in narrow corridors or climbing on top of each other to reach players on a higher level. In this case, they were piling up on top of each other to scale from the ground to the platform, where the four of us were standing. We had mortars, heavy machine guns, grenades, grenade launchers, turrets, and more.

“Heavy projectile weapons can take 10, 20, 30 out at a time, depending on where you hit them, especially if they’re piled up in swarms,” Karch said. ” If they’re climbing up a wall you can knock down the whole pyramid. Or we have the machine gun style with a rapid rate of fire. Those are upgradable as well. Really, our hope is that people will play each of these levels 30, 40, 50 times, because there are so many different ways to play through them.”

As we fired at the horde, it was satisfying to do a lot of damage. But we had to pay attention to the stragglers, coming at us from the side. If you ignored them, they could take you down. Then someone has to come over and heal you. Making sure you switch weapons, watch your sides, and move around the platform was key to survival. 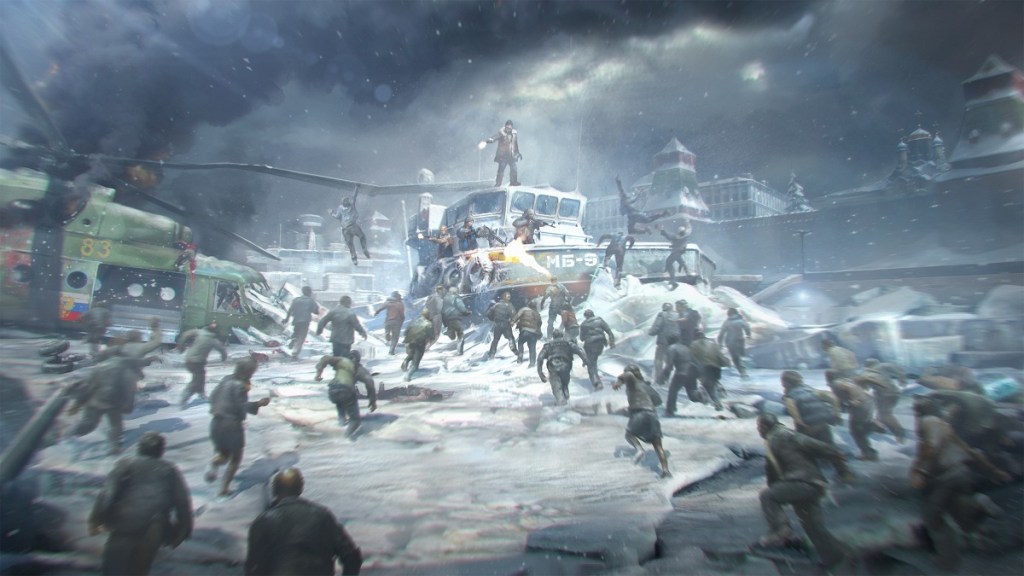 There’s also an advanced gore and dismemberment system, which provides a visceral and satisfying shooter experience. The placement of the items in each level is procedural, so that each time you replay it, it is different.

After we beat the dam level, we had to proceed to one more location. There, we had to find parts for a van and make our getaway. That was challenging, as we had to go off on our own, locate parts, and bring them back to the fan while trying to fight off the swarm. I had a lot of fun with a rocket-propelled grenade (RPG). And I had to heal friends more than once.

“No matter what the difficult level is, we try to make sure it’s always keeping you on the edge of your comfort zone,” said Hollis-Leick.

When we finally beat the level, it just sort of went dark. I was hoping for a little more of a cinematic reward than that. But oh well. Cinematics is not what this game is about.

I also played a long round of multiplayer, with four on four. In that game, your team of humans had to fight another team of humans while zombies were attacking. The zombies made it complicated, but you really had to concentrate on the humans, who were so much smarter and harder to beat.

I think this game is going to be a lot of fun, filling the gap for fans who want Left 4 Dead 3. While Days Gone is a single-player story game, World War Z should fill your itch for co-op and multiplayer play.

“The good news for us, although it’s bad news for fans, is that there’s no Left 4 Dead 3 on the horizon as far as I’m aware,” Karch said. “We were obviously very heavily inspired by it. We think we’re going to fill a niche here. We think we’ll give gamers what they want. Yes, this game is similar than Left 4 Dead, but we have many more zombies on the screen, and they move a lot faster. Even though the core experience is similar, the swarms and the numbers and the fact that it’s less tongue-in-cheek, more scary and more frantic, that will differentiate it.”