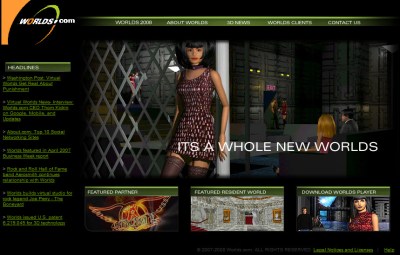 Here’s the winner of the anti-innovation award of the day. Worlds.com chief executive Thom Kidrin told Silicon Alley Insider that his company owns the idea of a scalable virtual world with thousands of users. Kidrin says the company has patented the concept and will sue anyone who refuses to pay for a license.

That includes makers of virtual worlds as different as Linden Labs’ Second Life and Activision Blizzard’s World of Warcraft. This is no joke for game companies or virtual world makers to brush off. Worlds.com filed a lawsuit against Korea’s NCSoft, the publisher of City of Heroes and Guild Wars, in federal court in Texas, where it’s easy to find plaintiff-friendly rulings.

Allow me a rant. They ought to chuck this one way out of court. This is like the Bible’s writers getting a patent on books. It’s like me going out and patenting my tree and then suing anyone else who grows one. I suspect there’s a certain obviousness to the patents in question here if they really are broad. Or, just as likely, the game companies can come up with prior art or references to virtual worlds that pre-date the patents held by Worlds.com.

When the company sued in December, it said it had patents dating back to the 1990s. The patents are related to Starbright World, the world for young patients who were benefactor’s of Steven Spielberg’s Starbright Foundation.

Of course, the earliest virtual world makers wanted to create virtual worlds that scaled to lots of people, but the computer and communications technology was too primitive. I can’t imagine that anything in the patents is useful for anyone developing a virtual world. That tells you their value right there. Meanwhile, I’m going to start Trees.com and see how far I can get with that.