Digital games was easily the biggest content category for digital content spending in 2013, according to the annual worldwide data collected by market researchers AppAnnie and IHS.

Mobile game apps accounted for $16 billion in spending, up 2.9 times from a year before; and spending on digital gaming was $34 billion, not counting game apps.

Overall, worldwide consumer spending on digital movies, games, and apps grew 30 percent to $57 billion in 2013, up from $44 billion. Mobile apps were a critical part of the digital spending, with overall app spending jumping 2.3 times last year.

The game numbers got a big boost from large gains in game app spending in Asia. Game app spending grew 4.4 times in Japan and 5.8 times in South Korea. Apps are now the leading overall content category in Japan.

Above: Digital spending by country

Movie-related game apps were popular in 2013. Kabam’s The Hobbit: Kingdoms of Middle-earth was the most popular movie-themed game, followed by Gameloft’s Despicable Me, and Fremantle Media’s Jurassic Park Builder.

As for the next-generation consoles like the Microsoft Xbox One and the Sony PlayStation 4, IHS forecasts that 41 percent of the spend on these devices will be for digital games, as opposed to disc-based games, by 2017. That compares to 24 percent in 2013.

The top mobile game publishers in 2013 were GungHo Online Entertainment in Japan, Supercell in Finland, King in the United Kingdom, Electronic Arts in the U.S., and Line in Japan.

Digital music apps saw consumer spending rise 77 percent in 2013 compared to 2012. Pandora and other music services led the growth with big spurts in advertising revenue. Subscription music services became a driver of growth for online music in 2013, and apps were a key way to deliver those services. The top music app by downloads in 2013 was Shazam, while the top music app in consumer spending was Pandora.

Digital content trends vary by country. The U.S. is the leading digital market, given its maturity and broad range of content. But Japan and South Korea each saw digital content spending grow over 40 percent last year. Much of that was due to skyrocketing spending on game apps. 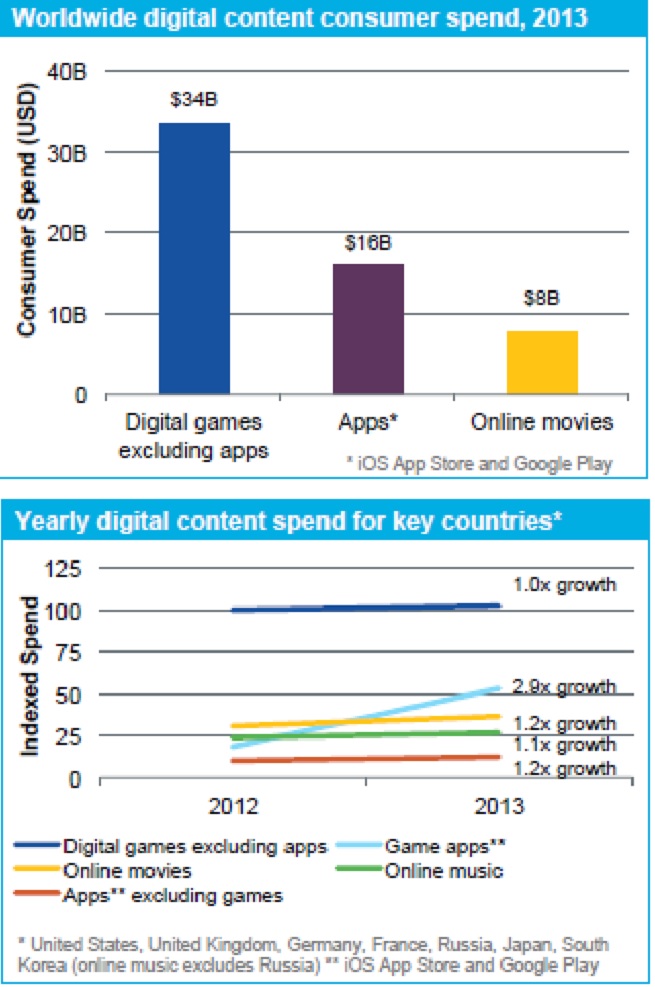