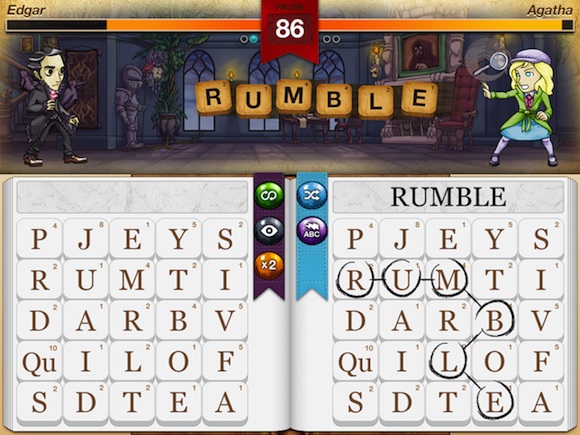 Armed with only her parasol, author Jane Austen doesn’t look like a formidable fighter. But that didn’t stop her from beating my magnifying glass-wielding champion Agatha Christie with a torrent of three-, four-, and five-letter words. In some weird way, I felt like this was my punishment for not finishing Pride and Prejudice back in college.

Developed by Feel Every Yummy, Writer Rumble is a fighting game that pits some of the literary world’s most renowned writers against one another in mortal combat. But instead of whacking each other on the head with their fists, they attack each other with the most powerful weapon of all: words. A board full of random letters determine your moves, and you must slide your finger to form as many words as you can in quick succession before your opponent can do the same.

Out now for iOS devices at $0.99 and early next year for Android, Writer Rumble is also the first title published under GameFly Games, the newest business venture for a company usually known for its long-running games rental service. It’s a solid debut, as Writer Rumble’s quirky premise makes it stand out from the glut of other word games on the App Store.

Tense multiplayer matches
While a single-player survival mode, where you try to last as long as you can against waves of increasingly powerful monsters, is available, it’s merely the training ground for the competitive online battles in the “Fight with Words” multiplayer. Like in other fighting games, your strategy starts by choosing the right character. Each writer comes with his own arsenal of power-ups that regenerates over time, and this can drastically alter the battlefield for a few seconds: One forces your opponent to spell backward, another triples the damage points for your next word, and a particularly nasty one flips the entire letter board upside down.

When your opponent gets into a groove by unleashing consecutive attacks and tricky power-ups, it’s easy to slip up and cause your own demise: Every time you misspell a word in multiplayer or make up one that doesn’t exist, the game slices off a part of your health bar. Once you get over the slight learning curve, however, matches become incredibly close, boiling down to who can recognize and correctly spell different words the fastest. And if you have an iPad, you can share the panic-inducing agony with another person next to you in splitscreen multiplayer (pictured above).

Sense of style
Writer Rumble’s homage to literature extends far beyond the battles. You flip through the menus much like a book, with each area introducing a new “page.” Quotes from these authors (as well as others not in the game, such as Ernest Hemingway and Sun Tzu) keep you busy during loading screens. And the Saturday morning cartoon versions of the writers are charming as you can find direct references to their line of work in the way they look and act. Hell, even H. P. Lovecraft’s creepy Cthulhu monster looks adorable. 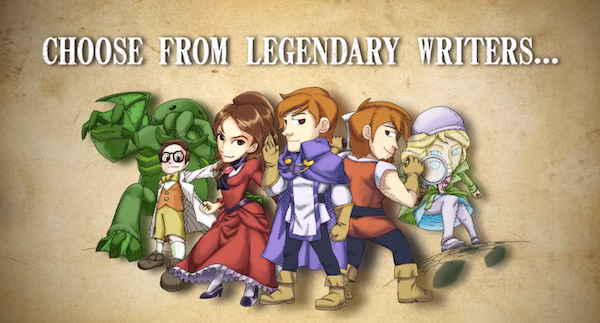 Technical problems
Writer Rumble crashed a few times on my iPhone 4S, forcing me to reset the game. And during some multiplayer matches, the screen locked up after receiving pop-up notifications of someone else wanting to start a different match. In those cases, I was unable to use the letter board at all, and I had to wait until I lost or quit the app myself for it to work again. It didn’t happen too often, but it was enough to be annoying, especially in battles I knew I should have won.

I don’t normally obsess over stats like kill-to-death ratios in multiplayer games, but my three wins and 14 losses in Writer Rumble feels devastating. And I can barely look at the insane survival scores people keep posting on the leaderboards. I like to think this is because some players have superhuman reflexes or an encyclopedic knowledge of odd words and not because I simply suck at it.

The good news is that Writer Rumble is fun no matter what side you fall on. With an art style that easily won over this English major’s heart and battles that keep you guessing until the end, it’s certainly one of the most action-packed word games you’ll find on your mobile device.

Writer Rumble is available now for iOS devices on the App Store for $0.99, with an Android release planned for 2013. The publisher provided GamesBeat with an iOS download code for the purpose of this review.