Take a loot at our MyCareer guide if you need help making a monstrous wrestler.

When it comes to making an entrance, the WWE knows a thing or two. Of course, for its PlayStation 4 and Xbox One debut, it can’t exactly rely on pyrotechnics or smoke.

The first entry in the long-running wrestling series to come out for those systems (starting today, while the PlayStation 3 and Xbox 360 versions came out last month with worse graphics and fewer features), WWE 2K15 has some pretty noticeable improvements from its predecessors.

However, as I was trying out the Xbox One version, I really appreciated a new single-player mode way more than the fancy, new graphics. Still, my enthusiasm couldn’t reach 5-star levels.

Improved character models are WWE 2K15’s biggest selling point, and they’re definitely a major improvement. Using the same face-scanning technology as 2K’s NBA franchise, the new models look much closer to the actual wrestlers they’re supposed to represent. You can see in the comparison picture below.

While this is just a cosmetic improvement, it makes goes toward making PlayStation 4 and Xbox One versions feel “next gen.” It’s a welcome change.

For the last few entries, the single-player components of the WWE games see fans re-create famous matches from wrestling past. However, we haven’t had a mode in years that enables players to create their own superstar and work their way up to the top of the WWE.

WWE 2K15 changes that by adding a MyCareer mode. You make your own wrestler and start from the bottom of the WWE at the NXT training center and fight your way up to the main roster. Competing in matches earns you points that you can use to improve your wrestler and learn abilities, and you always have a milestone to work toward (like winning a new championship belt or trying to earn a spot on the roster of a bigger show).

It’s a meaty mode that gives fans the chance to play out the dream of becoming a WWE legend. 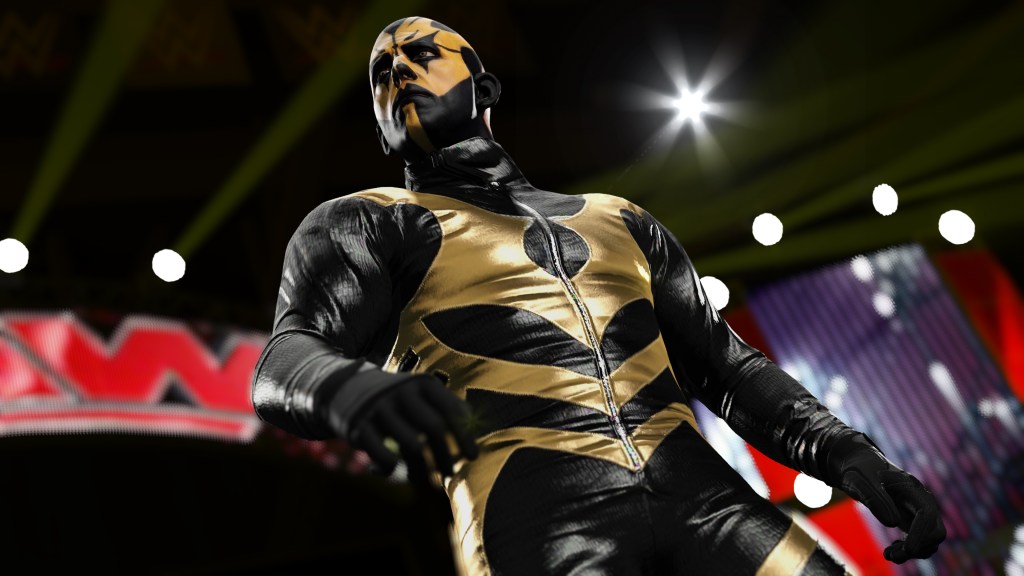 WWE 2K15 does still have a mode that re-creates famous matches. While the last two games focused first on the WWE’s famous Attitude Era and then on memorable WrestleMania moments, 2K15 highlights two specific feuds: John Cena vs. CM Punk and HHH vs. Shawn Michaels.

You compete in the same matches as they did during their battles, and you can unlock costumes and other goodies by performing certain events as the actually happened. This sometimes triggers cinematics in the middle of a match, which makes the encounters feel more like historical reenactments and less like another computer simulation. Well-produced video packages also set the stage for each encounter while giving context on the importance of the feud.

It’s as cool an experience as it was in WWE 2K14 and WWE 13, although the spotlight is a bit smaller since it pretty much focuses on just four wrestlers.

The WWE games were on a fast-pace trend for a while, but 2K15 slows things down in an effort to make the action look more like the real thing. Strikes don’t fly out at the rapid-fire pace that they used to, and each wrestler has a stamina bar that comes in the three stages. During the first stage, you can perform moves pretty easily. In the second, you move slower. In the third, your wrestler is clearly tired. If you run out of stamina completely, you won’t be able to perform certain moves or counter your opponent’s attacks.

The change helps to make 2K15 feel more like a sim and less like a fighting game. You can’t just run around and perform a dozen clotheslines without tiring yourself out and giving your opponent a big advantage.

Perhaps it’s because of the change in systems, but the usually deep amount of customization options for wrestlers and entrances really seems smaller. You don’t get nearly as many hair styles, clothes, lighting sets, and entrance animations to choose from.

You still have enough to make some interesting wrestlers, but the WWE games usually have some of the best creation modes in video games. You can add your own logos to put on tights and such, but you can’t exactly use some custom art to make a hat for your character. It’s a bit sad to see things scaled back. 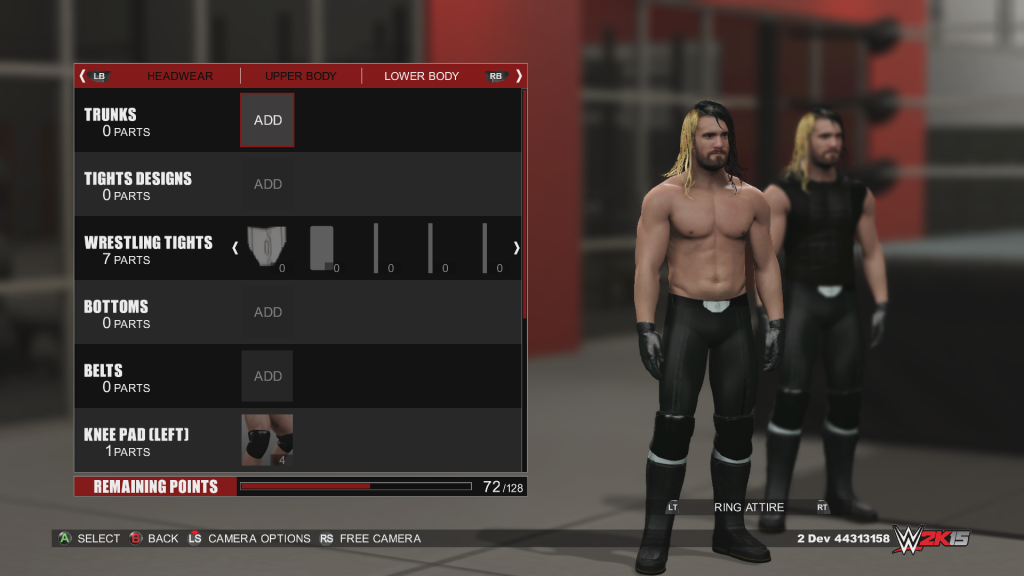 Above: It just doesn’t have as many options as it used to.

I’m not sure why, but I’m suddenly awful at countering my opponents’ attacks. This system works the same as it has for years. At the right moment, you need to press a button right before the other guy hits or grabs you. But despite playing these games for years, I just can’t get the timing down now.

This maybe because of the slower pace. Yet I’m getting easily frustrated when I can’t counter a dozen of my opponent’s moves in a row. Meanwhile, I get one move off on them before they turn the tables back on me. I understand why you can’t have counters be too easy. In a real wrestling match, momentum usually shifts. People don’t usually trade offense blow-by-blow. Still, it’s annoying right now.

The Comeback needs to go

Each wrestler has certain skills they can use in a match. Most of them are reasonable, like the ability to escape a ring while you’re on the mat or being able to steal an opponent’s finishing move. However, the Comeback is just way too powerful.

If a wrestler is losing, they’ll eventually get to push one button that activates an easy quick-time button sequence. At the end of it, they get a free Signature move. Landing a Signature move gives you a Finisher, the strongest kind of attack in the game. So these Comebacks basically give a wrestler the ability to easily turn a loss into a win.

This skill has been around for a few years, and it’s novelty has worn off. Yes, real wrestlers like John Cena and Shawn Michaels make miraculous comebacks all of the time (hey, it makes for easy drama), but it just feels cheap in a video game, especially when a computer opponent uses it to beat you after you’ve spent five minutes dominating them. What works in a scripted environment doesn’t work in competitive one.

WWE 2K15’s greatest addition is the MyCareer mode. It finally gives us a way to play out our WWE fantasies with our self-made superstars. The new character models are also a nice touch, but they’re offset by the loss of customization options.

The slower pace might throw some people off, but I like it (as long as I’m not finding it impossible to counter 5 minutes’ worth of moves). WWE 2K15 has some problems, but it’s still a fun wrestling simulation that actually made a decent attempt to bring some new features for its new-gen debut. I just can’t bring myself to get overly enthusiastic about it.

WWE 2K15 is out now for PlayStation 4, Xbox One, PlayStation 3, and Xbox 360. The publisher provided GamesBeat with a copy of the Xbox One version for this review.