Publisher 2K and the WWE revealed today that they picked Seth Rollins as the cover star for WWE 2K18, the next entry in the successful wrestling game series. WWE 2K18 is due out October 17 for PlayStation 4 and Xbox One. 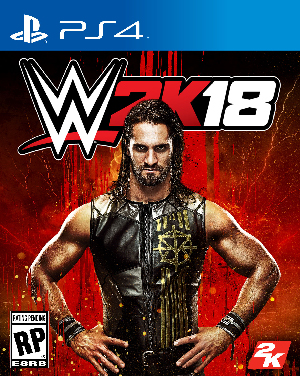 Above: Seth Rollins is making way for the young wrestlers.

This is a generational shift for the franchise, as Seth Rollins represents a younger group WWE stars. Recent cover stars have included the likes of Stone Cold Steve Austin, John Cena, The Rock, and Brock Lesnar. These are all wrestlers that have a long history with the biggest “sports entertainment” company in the world, and they all started their careers with the WWE in the ’90s or early 2000s.

But Seth Rollins made his WWE debut in 2010. Since then, he has become a two-time WWE World Heavyweight Champion.

“As the WWE 2K18 cover Superstar and franchise ambassador, it is my incredible honor and mission to ensure this game will truly be like no one — a calling card perfect for everything I stand for — as it sets forth on its own unique path,” said Seth Rollins. “Following in the footsteps of other WWE 2K cover Superstars — Dwayne “The Rock” Johnson, John Cena, Stone Cold Steve Austin, and Brock Lesnar — I now carry the torch and proudly represent a new generation of WWE Superstars. I am the future, and the future can’t be stopped.”

2K has not announced a PC version of WWE 2K18 yet, but the latest entries have made that pilgrimage typically a few months after the console releases.