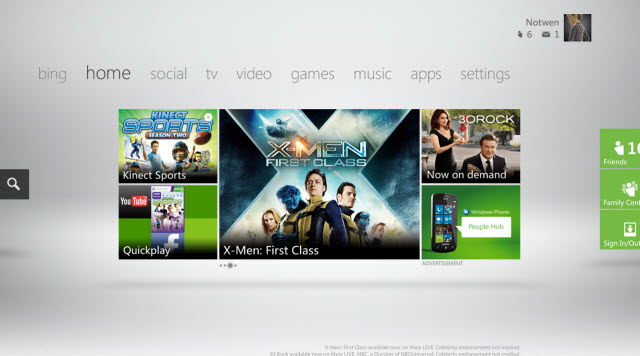 Microsoft has announced that a significant service update for the Xbox 360 will arrive on Dec. 6, bringing with it a newly designed user interface, cloud storage, expanded voice control with Kinect, and more.

Microsoft first revealed that changes were coming to the console during E3 2011. The company’s goal, it said, was to make the Xbox experience even more open, inviting and intuitive to navigate. To that end, 360 owners will now have the ability to search for entertainment using their voice and Microsoft’s search engine Bing, if they own a Kinect. Bing will search Netflix, Hulu Plus and ESPN – as well as the console’s own music, video and Xbox Live marketplaces – to find content, where previously users could search only one category at a time. In a preview of the new dashboard features, VentureBeat’s own Dean Takahashi said the faster navigation is important because 360 owners now spend about 40 percent of their time on TV and video when using the console.

The update will also bring with it a new feature called Beacons. Beacons will allow users to tell their Xbox Live and Facebook friends that they want to play a game, no matter what they’re currently doing on Xbox Live. Then, the Beacon will let them know when their friends want to play the same game or if they are already playing the game.

Microsoft is also making it easier for gamers to access their full profile and game saves through cloud storage. Now, anyone with a Xbox Live account will be able to sign into it from any console and see their saves, friends, Achievements and Microsoft Points, eliminating the need for gamertag recovery.

In addition to the new dashboard features, Microsoft will be rolling out a wealth of new content on an ongoing basis throughout the holiday months, including new customized applications for television, movies, Internet videos, sports and music. Microsoft recently reached a deal with Verizon, Comcast, HBO and other providers in more than 20 countries to bring their television content to the console, a move that will place it in direct competition with popular set-top boxes like the Roku and Apple TV.