Seamus Blackley, the cofounder of the Xbox, has teamed up with augmented reality startup Daqri to run a new research and development for them. The initial work will focus not on AR. Rather, it will look into the commercial applications related to an instant 3D printing technology that Daqri makes possible.

Daqri is working with Blackley, who was originally a theoretical physicist before he started making games, and his team of physicists at Heat Engine in Southern California to explore applications of optics and holography in something that Daqri calls Software Defined Light. This involves manipulating light in a way to create more powerful holograms, which in turn can be used for instant 3D printing.

Blackley’s physics think tank will explore the commercial application of the technology, which was gathered via research and acquisitions by Daqri’s CEO, Brian Mullins. Daqri’s main mission so far has been making AR headsets and helmets that blend virtual information and the real world.

“I set up a rapid prototyping lab, primarily focused on physics, in Pasadena, in the space where I was restoring all my arcade games. We ended up having staff and doing rapid prototyping projects,” Blackley said, in an interview with GamesBeat. “Through this intern we brought in from Cal Tech, I met someone who turned out to be one of the first investors in Daqri. He introduced me to the CEO of Daqri, Brian Mullins, who I really took a shine to.” 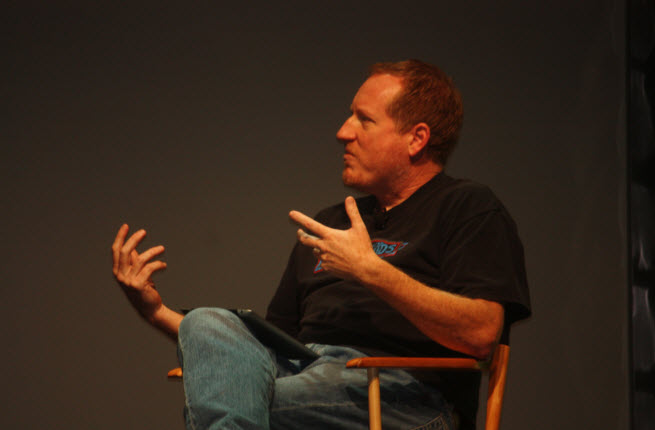 Blackley and the team will work to incorporate SDL throughout Daqri’s various offerings, including augmented reality headsets, automobile heads-up displays, and more. The latest application of the tech is an instantaneous 3D printer which cuts the time required to create objects by a factor of ten. For instance, Los Angeles-based Daqri has demoed creating a 3D printed paperclip in less than five seconds.

As part of the acquisition, Blackley and his team of approximately 15 engineers and scientists will join Daqri to continue innovation and production of Software Defined Light. A recent scientific breakthrough from Daqri, SDL uses software and phase modulator to control the speed of light and re-create 3D point-cloud imagery. The team has already demonstrated the use of SDL in instantaneous 3D printing and will pursue additional applications, including new forms of LiDAR, terrestrial and space communication, new computer and television displays, and non-invasive medical imaging.

“Seamus and his team are some of the brightest scientists in the field,” said Mullins, in a statement. “We were excited to bring their experience and intellectual horsepower into our team to help us deliver on the potential of Software Defined Light and the Daqri AR platform. When the ‘Father of the Xbox’ wants to drop everything he’s working on to explore a new technological breakthrough, that’s when you know you’re onto something big.”

Daqri was founded by Mullins in 2010. Blackley was one of the renegades at Microsoft who created the original Xbox game console, launched in 2001. (I wrote a book about the making of the Xbox). He went on to a long career in games and as an agent at Creative Artists Agency.

More recently, he cofounded a mobile game company called Innovative Leisure, to make games made by former Atari classic arcade game designers. That company didn’t quite make it, though Blackley still has some games that could potentially be launched at some point in the future.

“Brian showed me some of the stuff they were doing at Daqri,” Blackley said. “He invited me to his place in downtown L.A., and I was not prepared for what I saw down there. I wasn’t prepared to see this big company with cool Star Trek-looking offices and tons of augmented reality stuff.”

Blackley said that Daqri also acquired another research company, Two Trees, and they had found another possible use of the holographic technology.

“They had thought of a few things, so we discussed them,” Blackley said. “Among them was using holography to do instantaneous 3D printing.”