Microsoft really wants to win this holiday season, and it looks like the price cuts and game bundles are working.

The Xbox One dominated Black Friday sales, according to market-research firm InfoScout. Microsoft’s latest system made up 53 percent of all console sales on one of the biggest shopping days of the year. Sony’s PlayStation 4, meanwhile, managed to capture 31 percent. The Xbox One was on sale for $330 at a number of big stores like Target and Walmart, and Microsoft bundled it with big games like Assassin’s Creed IV: Black Flag and Assassin’s Creed: Unity. That helped gamers choose the Xbox One over the PlayStation 4, which was $400 bundled with Bungie’s sci-fi shooter Destiny or with the rereleases of Grand Theft Auto V and The Last of Us. 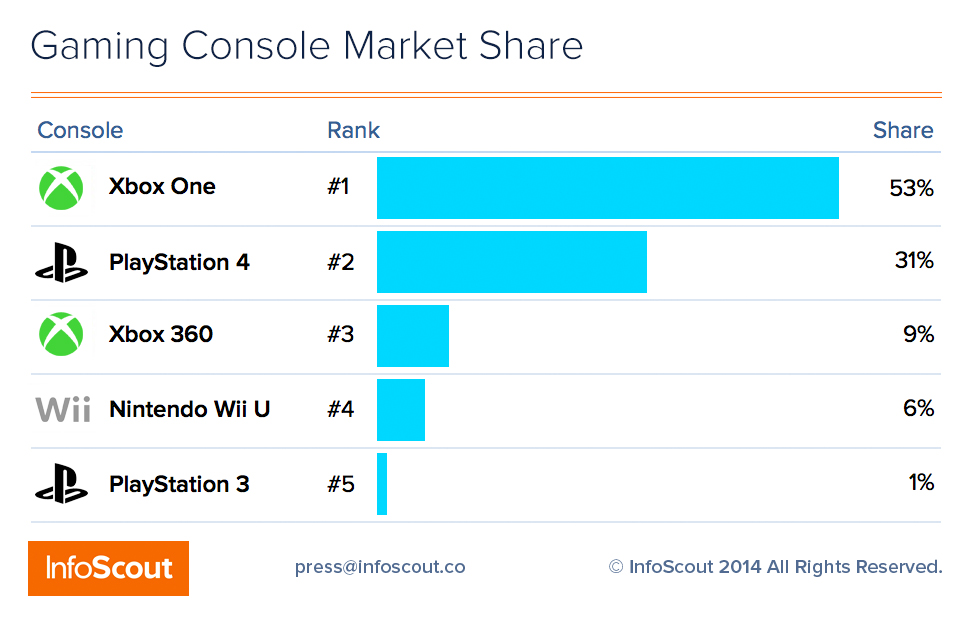 Above: A chart of console sales.

This is likely a good sign for Microsoft. The PlayStation 4 has built up a substantial lead over the Xbox One since each system debuted last November. Microsoft dropped the price from $500 to $400 and then to $350 until January. If Microsoft can maintain this market share until then, it could make a dent in Sony’s overall market share.

To get this data, InfoScout uses two smartphone apps that reward consumers for uploading their purchases by taking pictures of their receipts. The intelligence firm tracks more than 200,000 shoppers, and it gets more than 125,000 receipts on an average day. On Black Friday, consumers uploaded more than 182,000 receipts, which helped InfoScout declare Xbox One the Black Friday winner.

While the Xbox One dominated the battle against PS4, the Xbox 360 also continues to sell well. The system composed 9 percent of all console sales, which is actually better than the Wii U’s 6 percent. The PlayStation 3 only accounted for 1 percent.

Black Friday is ostensibly the start of the gift-giving shopping season, but plenty of people were out buying consoles for themselves.

The vast majority of people who picked up Nintendo’s hardware did so for their children, and two out of every three people did the same for Xbox One.