After playing games for more than 25 years, I’ve used dozens of gamepads, but I think I’ve found my favorite one ever.

Next week, Microsoft will release the Xbox One Elite Controller. It’s a $150 device that does exactly what the standard controller does, but only better and with a few extras. That might sound crazy to a lot of you, and that’s fine. I don’t expect most gamers will care about something like this.

But for those of you who are interested, for those of you who spend $150 on a gaming keyboard, $100 on a mouse, or $250 on a pair of earphones, I feel safe telling the people who don’t mind spending the money to game with the best equipment that the Xbox One Elite is the controller you’re looking for.

I don’t want to play console and most PC games with anything other than the Elite from now on. That’s because the controller feels so damn good. It’s made with high-quality parts, and you can sense that when you first grab hold of it. The plastics feel smooth, and the rubberized grip in the back provides enough friction to help you keep the gamepad secure without having to squeeze it.

When you start playing games, the Elite melts into your hands. You forget it’s there, and a lot of that has to do with its satisfying heft. You might think that a heavier controller would make it more bulky and noticeable, but it’s the exact opposite. The mass of the controller burrows affectionately into your inner knuckles. Combined with the rubber grips, I’ve never had a gamepad that was so easy to hold with relaxed hands.

The buttons are also wonderful.

The face buttons, triggers, sticks, and D-pad are all great on the original Xbox One controller and the slightly revised controller that the company now sells (Microsoft updated its pad to improve the bumper buttons and to add a 3.5mm headphone jack). But everything is a bit better here. Pressing a face button feels more certain than ever. Clicking in a thumb stick requires the exact right amount of pressure. And the D-pad never leaves you wondering if it ate one of your inputs.

The biggest improvement for me, as someone who has regularly used the original pad that came with my launch Xbox One, is in the bumpers. On my normal controller, it’s easy to click the bumpers, but it’s difficult to hold them down. They fight back against your index finger with a bit too much resistance. That’s better now. I understand that Microsoft fixed this with a revision, but it’s just nice to have the only complaint I had with the original gone. Now, pressing the bumpers is a delight. Instead of having their natural state and a state you have to force them into with your finger, these buttons now feel like they have two distinct states and you simply engage the one by rolling your finger over it.

The new paddles on the back are equally easy to press. I am impressed with how this gamepad has made using odd fingers, like my middle and ring, feel natural. A lot of the credit for that has to go to Scuf, which holds the patent for a lot of this tech and design, but Microsoft’s engineers did not screw anything up.

Finally, the included USB cord is probably the best cord of any kind that I’ve ever owned. It uses that thick rope-like material, and both its USB and micro-USB sides fit snuggly and securely. I sometimes have instances when playing with other controllers and cords on PC where something will come loose during gameplay. That is not going to happen with this device. I also tried other cords on the Elite, and its port is equally responsible for that secure connection, which is yet another testament to its build quality.

The customizations work and they make sense

Of course, if you don’t like the way certain things feel, you have the option to change them.

The paddles, D-pad, and both sticks are completely removable. Additionally, the base Elite controller comes with one alternative D-pad and two other sets of thumb sticks (three in total). And keeping with the theme that this thing feels amazing, a part of me really likes switching to a new game that may benefit from a different setup because it is so satisfying to pull the sticks off and feel the magnet slurp on the new one.

Also, I don’t think I would’ve ever known that this thing had swappable parts just by using it and looking at it. It looks sturdy and nothing wobbles or rattles out of place in the middle of a gaming session (or ever). These parts won’t come off unless you deliberately take them off — although I’m saying that as someone who doesn’t have children or a dog. I suppose if you do, you may want to take advantage of the included controller carrying case when you’re not using it to ensure parts don’t go missing. 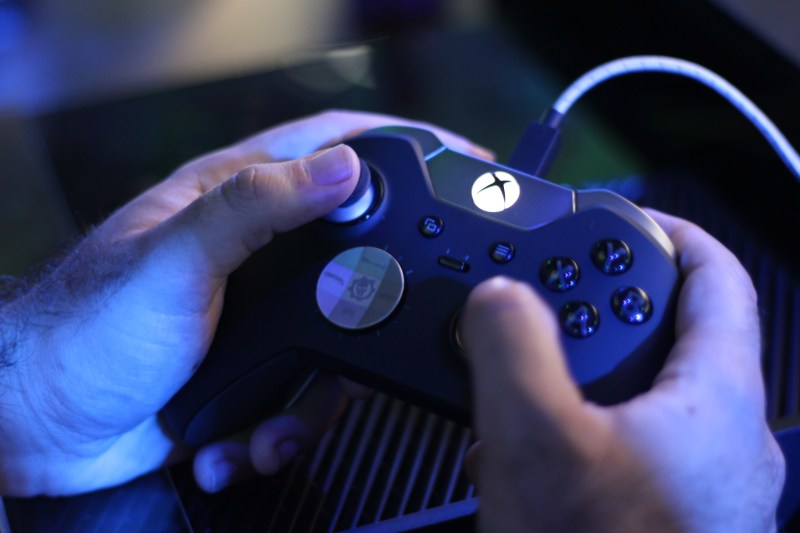 Above: Those are our hands on that Elite controller!

And you’re going to want those parts, because quickly swapping between certain sticks and paddle setups for specific games is one of the best ways to get the most out of this device.

When I play first-person shooters, I like to have all four paddles on the back along with the standard thumb stick on the left along with the extra-tall thumb stick on the right. This gives me quick-and-responsive character movement on the left and hyper-accurate aiming on the right. I can then map all of the face buttons to the paddles so that I never have to stop aiming to jump or do another maneuver.

When I switch to an action game, like Transformers: Devastation, I switch back to the regular sticks (or maybe the medium-sized ones) and take off the paddles.

Now, I know that a lot of this probably sounds familiar to anyone with a Scuf pad, but that’s not me. I’m not coming from that perspective. And I just feel like maybe, if I’m going to spend $150 on a controller, I want the official one that is also going to get all the support from Scuf as well.

But knowing that Scuf is even a thing kinda proves a point about the Elite. It can make you better at games if you use it right. You can jack up the sensitivity for your aiming in Call of Duty and use a longer stick to get an advantage on the competition. I don’t know if it’s going to make a huge difference for me, but that’s just a perk for me on top of all the other things I love about Microsoft’s new controller.

It’s a hassle to switch from one game to another

While I like having choices, I’ve occasionally found that I want to just quickly boot up a game without having to go through the process of taking off parts.

Rocket League on the PC works great with an Xbox One controller. But you rarely need to use the camera stick in that game, so I don’t need the paddles to replace the face buttons. In that case, I find that the paddles get in the way. Great! I’ll just take ’em off. But that means getting out the case, unzipping it, putting them away, zipping it back up, and getting back to my car soccer.

That may not sound like much, but if you’re ever bouncing around between different kinds of games, it can get annoying.

This is a bit of a bummer for me. I like to use my Xbox One controller on both my PC and my Xbox One. But going from one to the other is a little bit more difficult than it is with a standard controller. That’s because the Elite does not have the IR sensor. The regular gamepad has a built-in IR blaster that goes off when you are trying to sync it from the couch. The Xbox One’s Kinect sensor can monitor that and pair it to the system. That’s no longer an option, which means I have to remember to hit the weird sync button on the side of my Xbox One every time I get done playing PC games.

I get it. The Kinect isn’t really that hot anymore, and I bet most Xbox One owners don’t have one. And since this is supposed to be a pro controller, why include extra junk that only works with the Kinect? But still, it’s something I would’ve appreciated.

I think it’s obvious that as much as I love the Xbox One Elite Controller, it’s not “$150 great” for everybody. This is a premium device that will replace a controller that is already wonderful. But if you are on the fence, and you play a lot of Xbox One or PC games with a gamepad, then I highly recommend it.

The Xbox One Elite Controller is available October 27. The manufacturer provided us with a device for the purposes of this review.