Microsoft is giving the Xbox One a small price cut for the launch of one of the console’s biggest games.

The company announced that it is releasing a special edition Xbox One bundle that includes Titanfall and a month of Xbox Live Gold for only $500. That’s the same price as a standard, game-less Xbox One. Essentially, this package — which Microsoft only plans to offer for a limited time — will save customers $60 for the hotly anticipated sci-fi shooter as well as $10 for a month of the system’s premium online service. The bundle goes on sale March 11, which is the launch date for Titanfall on Xbox One and PC (an Xbox 360 version is coming March 25).

“To celebrate the launch of Titanfall, we wanted to do something special,” Xbox marketing boss Yusuf Mehdi wrote in a blog post. “For those of you who are already fans of Xbox One, we hope this will encourage more of your friends to join you on day one for Titanfall on Xbox One. If you’ve been waiting for the biggest game of the generation before purchasing your Xbox One, this special, limited-time offer is perfect for you.” 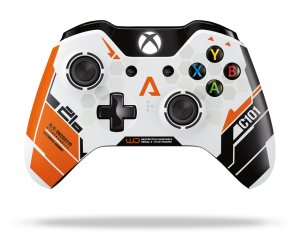 Above: The Titanfall Xbox One controller does not come with this bundle.

The bundle includes the standard black Xbox One, controller, and headset. Players will also get a redeemable code for the digital version of Titanfall. Microsoft is also releasing a new Xbox One controller that features Titanfall-inspired art, but that is not included with this deal.

The Xbox One has a lot riding on Titanfall. Microsoft’s console sells for $100 more than the PlayStation 4, and that price difference (among other things) has helped Sony gain a market-share lead in the early months since both systems debuted in November. By including such an important game, Microsoft could make up some ground.

While it is a multiplatform game (Xbox One, Xbox 360, and PC), Microsoft inked a deal with publisher Electronic Arts and developer Respawn Entertainment to keep Titanfall off PlayStation 4 or Wii U. That has many non-PC players treating this release as one of the first big Xbox One exclusives of 2014.

EA and Respawn recently finished a Titanfall beta test for Xbox One and PC. During that trial period, more than 2 million players experienced a small portion of the title’s futuristic parkour and mech-piloting action.