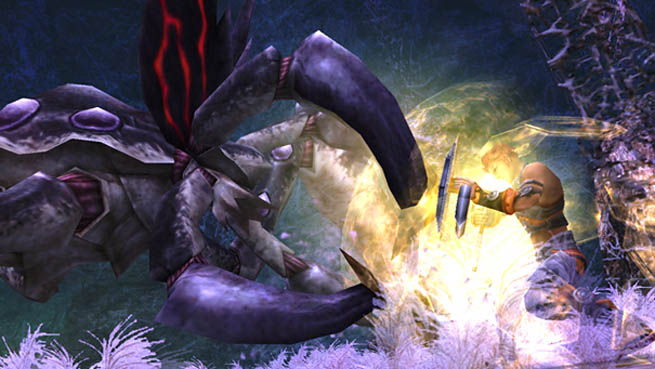 The first four letters in “Xenoblade Chronicles” come with a lot of baggage attached to them. They are also the first four letters of “Xenosaga” and “Xenogears,” and they stand for the most loved and most hated and otherwise most polarizing Japanese role-playing games of all time.

Sharing the whole story of these three games’ creators and what they have in common would take a while, so we’ve shuffled it off to one side of the next page. The important part is that Xenoblade Chronicles leaves most of its baggage behind. In fact, in a lot of ways it’s the last thing we would have expected from the outfit that made it.

Xenosaga was routinely mocked as a game made by people who would rather have been making movies. It was, one might say, only grudgingly interactive. Xenoblade, on the other hand, doesn’t feel like it wants to keep our hands off the controller. It’s fun to come to grips with, and it wants us to play with it for a long, long time.

Xenoblade is built around a real-time combat system. Characters attack according to a steady, set rhythm, but otherwise they move around the battlefield and use skills with complete freedom (and the bad guys can do the same). Strategy and tactics involve maximizing regular damage output, keeping the enemy’s attacks focused on the toughest defensive party member, managing helpful stat bonuses, making sure support characters keep the healing spells coming, and maneuvering to land special attacks in the right places.

In other words, it’s World of Warcraft, or something a lot like it. Xenoblade shows a huge influence from massively multiplayer online games, even down to the jargon in the tutorial modes. It uses all the familiar lingo, like “buffs” and “debuffs” and “aggro.” As far as their roles in combat go, the characters fall into familiar categories, from the DPS attacker to the tank to the summoner to the healer.

Fighting things is most of what you do in this game, and it’s most of the fun. There’s a mental and physical challenge to it, not just a steady process of picking options out of menus. The pace of combat hits the right level of controlled chaos – rarely does the game become unmanageable, but there aren’t many times that you can slack off and stop paying attention, either.

Likewise, the overarching process of developing characters takes just enough involvement that it doesn’t get boring. Tweaking equipment and crafting a party that works well together is a fun, interesting process, not a head-scratching festival of higher math. 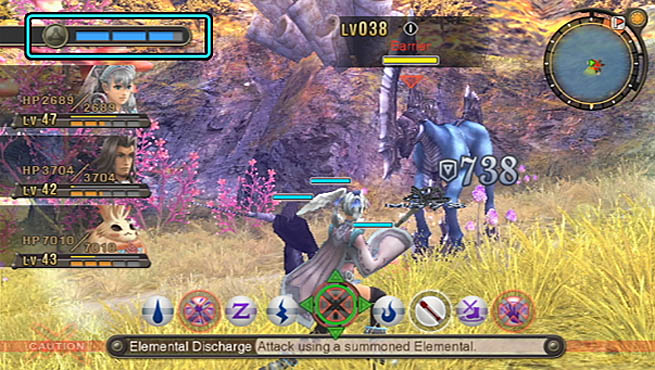 Outside of combat, wandering through the dungeons feels a lot like an MMO as well. There’s no transition between the field map and the battlefield – just trigger a wandering enemy’s aggro and it’s on. There’s a lot to be said for this way of doing things, as opposed to the old-fashioned “battles pop out of nowhere at random” style. Even before a fight starts, there’s a separate layer of tactics for dodging the bad guys or engaging them in the right place. Pulling enemies into a spot where it’s safer to take them down is absolutely a viable tactic, and sometimes it’s crucial. Some dungeons host enemies that low-level characters do not want to aggravate.

In a few cases, bringing the MMO concepts to a single-player game doesn’t work. Once in a while, Xenoblade tries to incorporate environmental hazards into a boss battle, things like lava or rivers of deadly energy. This is fine in a game where the players are all human and smart enough to avoid those hazards, but in a game where most of the party is under the computer’s control, the artificial intelligence has a nasty habit of falling off cliffs. Luckily, most of the key story encounters are sensibly lava-free.

Do you love side-quests? Are you compelled beyond your will to do every last little extra bit of questing a game has on offer? Then you may or may not want to play Xenoblade, depending on whether you feel like seeing the sun for the next six weeks. There is a fearsome collection of bounty hunts, collection jobs, and other extra objectives scattered all over the game world. Some are out in the open, some are linked to story triggers, some show up at certain times of the day. Only the truly mad will get them all – or rather, only people who follow a guide so closely that it’s hardly any fun anymore.

To Monolith’s credit, there’s more to the extra quests than just doing a job and getting some cash or experience. Many of them are bound up in a larger side-story where the party rebuilds a destroyed human colony – different quest chains fix up different parts of the settlement. Some quest chains affect the party’s relationship with key NPCs, who’ll pitch in to help with other projects when they get friendly enough. It all works to make the side trips more interesting, giving them some context and a place in a larger progression.

With so much extra stuff to do, it’s very hard to estimate how much time the average player might get out of Xenoblade. An adept RPG’er could probably bash through the central story in 40 hours and change, pretty typical for the genre. Tearing through the bulk of the side-quests, though, might take three times that long, and no player is going to knock off every quest in just a single trip through the game. Not without following a guide, anyway, and following it so closely that all the fun would wash right out of the experience. 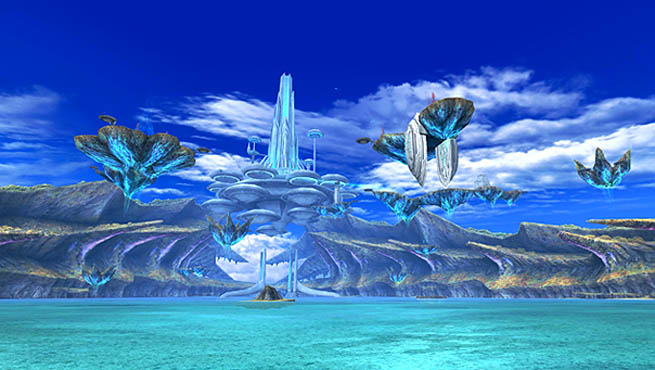 Doing lots of side-questing has an extra side benefit, in that it lets you see every little corner of the game world. Just as there’s plenty to do, there is plenty to see, and most of it’s worth seeing.

Going all the way back to Xenogears, the Monolith crew has always had a talent for epic, imaginative world design. A moment that will hook a lot of players comes just after the prologue to Xenoblade, when the camera pulls back through a long tracking shot and we see just where our heroes have set up their home. They live in a tiny divot carved into the knee of a giant dead petrified god.

Their adventure takes them out of the knee, over the leg, through the guts, up to the head, and then across the way to the heart of the other petrified god, which may or may not be planning to stay entirely dead. For about the first ten hours of the game the background concepts are fairly restrained, but then it breaks wide open, showing us a long string of huge, beautiful vistas. From the dense primeval forests to the massive sci-fi floating cities, they’re almost all worth sitting back for a second to admire the view.

On a mechanical level, some of the dungeon designs become a touch too complicated for their own good. The layouts are so multi-layered, with interlocking pathways tangling above and below and around each other, that it gets pretty hard to find the way to quest objectives with only a flat 2D map to show the way. It’s not a pervasive problem, but it could have used some work – either simplify the layout or create a 3D map, in the style of Metroid Prime, to show all the ins and outs and where to go.