With Starfox Zero being delayed into 2016, Nintendo’s biggest holiday release – both figuratively and literally – is Xenoblade Chronicles X, the followup to the critically acclaimed 2012 Wii RPG (re-released for the New 3DS earlier this year).

Xenoblade Chronicles X follows the exploits of a post-Earth humanity, forced to flee from the destruction of our home planet to resettle on a faraway alien world. It’s been claimed that its world is bigger than those of The Witcher 3 and Skyrim, and that assertion holds weight in terms of sheer gameplay content. Xenoblade is filled with things to do, with a myriad of sidequests to partake in and plenty to discover just by wandering around.

Xenoblade Chronicles X’s world is huge and expansive. The oft-repeated claim of “See that mountain in the distance? You can go there!” during demos of these sort of open-world RPGs has been mocked as marketing buzzspeak, but here it holds true: Eventually, you’re going to be able to climb those gigantic, strangely shaped cliffs you see towering off in the distance. Heck, at some point, you’ll probably have to for a quest.

With so much to explore, Xenoblade gives you a lot of tools to make your questing on the alien world of Mira easier. It is usually pretty generous about marking specific locations you need to visit to complete quests, but you’ll sometimes find that the terrain might prevent you from taking a direct route to the location. To help find your way, it supplies you with an aerial camera to get a Google Maps-like view of your surroundings. And early on, you also get a neat piece of kit called a “follow ball”: throwing it out draws a path to the mission destination you’ve specified. It’s like a futuristic GPS. (Just keep in mind that, like a GPS trying to guide you through construction areas, the follow ball doesn’t know when it’s zipping through a lair of hungry high-level enemies.)

Not only is it big, it’s also fun to explore

Xenoblade Chronicles X offers a lot of fast-travel options, which you can access at practically any time. While that’s pretty nifty, you’ll often find yourself opting to simply move to your next destination instead. Not only does this allow you to find more loot and objects of interest out in the field, it also lets you really take in the sights and sounds of Mira and its many locales.

Though the Wii U might not be as technically powerful as some other consoles on the market, the sheer strength of Xenoblade Chronicles X’s art direction gives players a world of awe-inspiring beauty. Exploration is its own reward. While going off the beaten path might lead you into peril, it might also lead you into an unexplored treasure trove of amazing alien fauna and strange beasts. A day/night cycle also affects the landscape and the creatures that roam it, transforming Mira before your eyes. Few games manage to capture the feeling of exploring a world unlike ours as well as Xenoblade Chronicles X does. 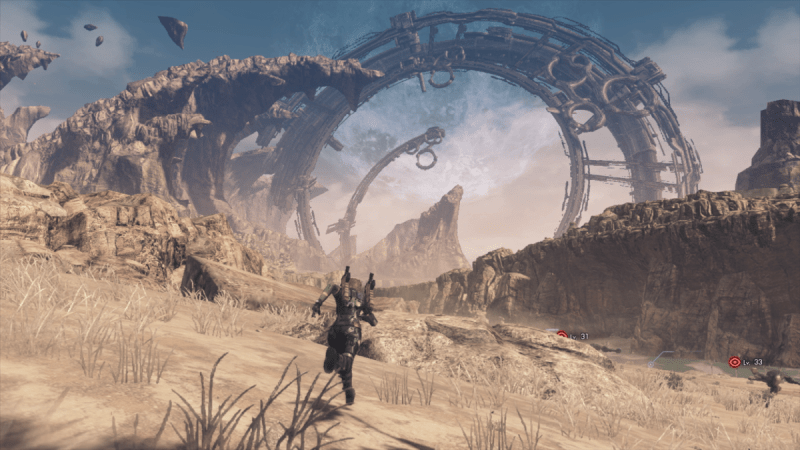 Above: The environments often leave you wondering what’s natural and what’s… less natural.

Your character can follow many different class routes, learning skills and abilities that are beneficial to multiple combat scenarios. Switching is as easy as picking a selection from the class menu on the field — provided you have met the necessary level requirements, of course. Combat skills can be equipped and levelled up individually with Battle Points you earn from fighting, exploring, and completing missions, so if you find one particular way top enjoy combat — say, sneaking around an enemy and back-attacking — you can pump up skills that support that and rely on your CPU-controlled teammates for support in other areas. If you’d rather play it more safe, you can spread your augments around a wider variety of skills to become a combat jack-of-all-trades. You can upgrade weapons and armor with specific augments, as well, allowing you to micromanage down to the tiniest details of combat.

Once you clear Chapter 6, you’ll get access to a new mode of combat: mechanized armor suits called Skells. These robotic beauties change up the combat even further, as they have the resistance and firepower necessary to take down some of the absurdly huge beasts you see lording over the landscapes of Mira. You can hop onboard at any time during a fight.

Skells can help with exploring, too: You can transform them into a speedy motor vehicle to zip around the land (and mow down tiny enemies, which is admittedly quite hilarious), and by finishing the right set of quests, you’ll eventually open up flight modules for extra exploration potential. Skells operate on fuel, however, so you must be wary of running out of gas, lest your intrepid avatar find themselves in a monster cave with an empty tank.

It’s really, really big… on your Wii U storage, too

If you buy Xenoblade Chronicles X at retail, prepare for some lengthy and annoying load times unless you download the free “data packs” from the Wii U eShop. These data packs help eliminate load times and move along area transitions smoothly, but they total up to over 10GB in storage space. Considering that most Wii U systems only come with about 32GB of storage, that’s a pretty large chunk of space you’ll need to sacrifice for a smooth gaming experience. (If you opt download it from the Nintendo eShop instead of buying a retail disc, it’s even bigger.) Maybe it’s time to put that extra storage drive you got super-cheap on Black Friday to use.

The story takes a while to get interesting

While exploring Mira is exhilarating, the story doesn’t do much to spur on your expeditions — not initially, at least. It doesn’t take long to discover that a hostile alien race has followed humanity to this new planet and that they want us all dead, but you won’t learn much about the hows and whys of it for some time. Your character being a blank-slate avatar doesn’t help much here, either: While you can make some basic dialogue choices here and there, they don’t have as dramatic an effect on how the plot plays out as, say, your decisions in something like Mass Effect. If you were planning on being Anime Commander Shepard, you’re probably going to be disappointed.

Oh, and those awesome Skell mechs? Yeah, you aren’t getting your own Skell until you’re a good ways into the game. You’re just going to have to be patient.

Xenoblade Chronicles X is a complex game, weaving numerous systems and factors into a web of combat and exploration. If you’ve played the first Xenoblade, a lot of the combat elements are familiar. But if you’re new to the series, it’s easy to get overwhelmed: the game doesn’t offer much in the way of tutorials, instead offering introductions to game systems primarily via text infodumps. The UI often displays a lot of information at once, as well, making getting a grasp on everything feel a bit intimidating. (It also makes things really hard to read if you opt to play on the Wii U gamepad). 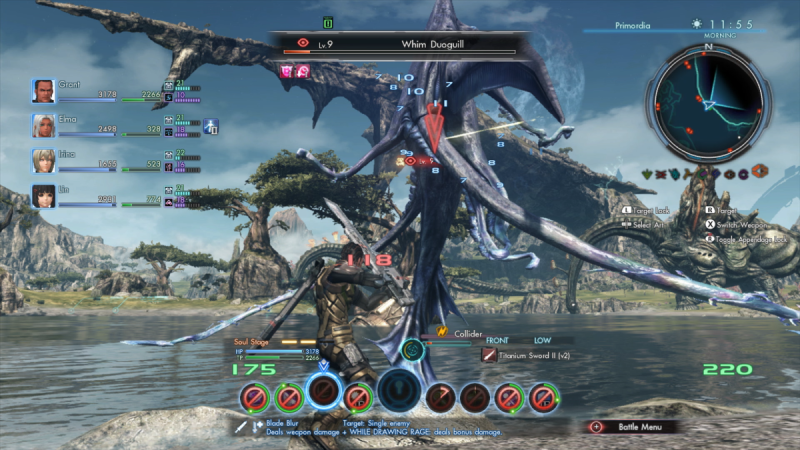 Above: Combat is a blast, but the sheer amount of info it presents can also be overwhelming.

Xenoblade Chronicles X is the kind of ambitious, meaty open-world RPG that’s been mostly absent on the Wii U up until this point. While it takes heavy inspiration from both Japanese and Western RPGs, it looks and plays distinctly enough from competitors in the field to be a unique, engaging experience. It has more than enough to satisfy the hungriest RPG fans: fun exploration, in-depth combat, and a scope that will keep players engaged for a very long time.

Xenoblade Chronicles X is available on December 4 for Nintendo Wii U. The publisher provided GamesBeat with a copy of the game for the purposes of this review.