Game payments firm Xsolla is launching Unconventional, a platform for holding virtual events with 3D avatars inside 3D worlds for the game industry.

Xsolla provides more than 1,500 game companies with access to more than 700 payment systems around the world. And it has been expanding its services by providing a “game business engine” for developers so they can just concentrate on making games. The company is expanding into events because it sees this as a way for it to continue meeting the world’s developers.

And with Unconventional, the company is trying to help developers who are no longer able to go to big events in person. It’s an alternative to talking to people on Zoom calls all the time.

“All of the real-world events were shut down due to the pandemic, and we saw a real opportunity to expand into the event side,” said Xsolla president Chris Hewish in an interview with GamesBeat. “We’ve spent a good part of this year working at features and tools that allow people to really re-create that real-world experience of going to events, and doing it high-fidelity platform online.”

To create Unconventional, Xsolla is partnering with Pantera Entertainment, an indie game company that Steve Fielding runs. Pantera built Your World, which uses the Unreal game engine to create a realistic animated carnival environment where attendees can create their own 3D avatars and staff 3D booths in a 3D virtual world. Around 500 people can attend events inside the Unconventional space. Call it a little metaverse.

“Steve created this really cool platform where you could come in and build and create your own games in a more advanced version of Roblox or Minecraft,” Hewish said.

The aim is to try to restore some of the networking and serendipitous meetings that can take place at real-world events. Fielding will run Unconventional for Xsolla, while still staying in charge of Pantera.

The first event will be Epic Games’ Game Carnival Hosted by Unreal Engine, starting at the end of October and running through the end of the year. Xsolla will keep the Unconventional virtual space open for people to meet and entertain themselves.

“It’s about how you recapture the fun of going to conferences and events in person,” Hewish said. It’s all that social part that happens in between the sessions. The random meeting of new people. You can socialize with people at a go-kart race. You could also monetize an event with sales of content or user-generated content.” 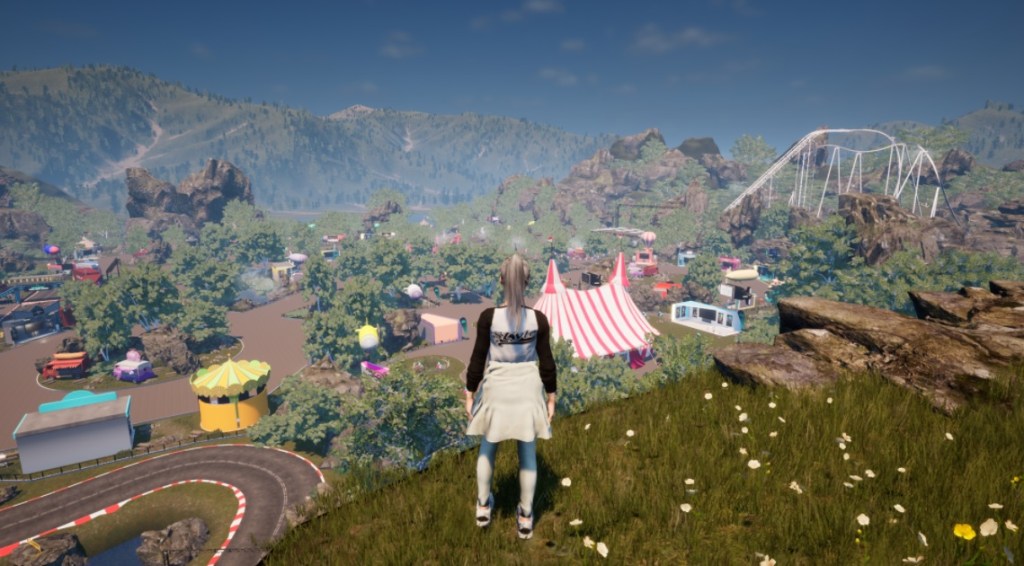 Above: You can go for a hike inside Your World with other event attendees.

Unreal Engine held a developer contest and the top 60 projects got their own booths in a big virtual environment that resembles a carnival. Finalists can show off their games and network concurrently with up to 500 other industry insiders, publishers, and investors in the same virtual space — from the convenience of their homes or offices.

Xsolla gave developers a dry run of Game Developers Carnival with Your World earlier this year. And it’s still in its early stages.

“Xsolla is contributing to funding, marketing, support, and publishing support,” Hewish said. “This is still very much in development in an alpha stage. We will formally launch it mid-to-late next year.”

Attendees have to download the client in order to create their avatars and participate in events. People can go to a circus tent to listen to talks or participate in awards ceremonies or have fun at parties. And outside, attendees can walk around and look at booths or speak in audio chat to attendees or expo workers.

Game Carnival Hosted by Unreal Engine is partnering with three video game trade shows from October through December. The platform remains open between each B2B event, allowing players worldwide to experience all the new titles and innovative technology.

The current schedule is: