Yahoo Games is the giant of online game portals with 18 million unique visitors a month. But the company is shaking things up as it announces today that it is shifting to a new business model based on free ad-supported games for many of its pay-only titles.

Kyle Laughlin, head of games at Yahoo, said in an interview that the new model will help broaden the market for games to price-conscious consumers. It is able to do so because of its alliance with two in-game advertising companies, Double Fusion and NeoEdge Networks.

Double Fusion has pioneered methods for inserting ads into games and has also added capabilities for inserting video ads. NeoEdge Networks, meanwhile, has technology for inserting video ads into downloadable casual games. Both start-ups will insert ads into the games so that players can play for free many of the games they previously had to pay for. The deal will result in the web’s largest collection of free games fully supported by advertising, the companies say.

It takes a little explanation to understand why Yahoo Games is making this move. But Laughlin said that after a year of preparation, the company feels that the changes are essential to its growth in the future as new business models take hold in the game industry.

Yahoo Games has been ranked No. 1 among the game portals for the past 50 months, according to comScore. It has a demographic ranging from 20 years old to 50, with the audience split evenly between males and females. Those demographics appeal to major advertisers, who are looking to the web because people are watching less TV and reading less print.

But in reality, Yahoo’s offerings don’t really fit the habits of many casual gamers. It has a hundred or so simple Flash games and 50 or so simple multiplayer games on its site. It wraps those games with ads that run down the side of the game. But revenues from such games are limited. 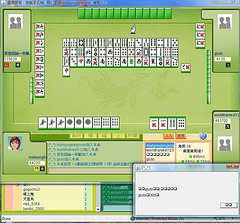 And Yahoo has about 600 more sophisticated games that require a download. These games are still casual but they’re visually more appealing and deeper in game play than the simpler titles.

Yahoo Games currently lets players play these games free for an hour or so, but then consumers have to plunk down $20 to play the game more. Typically, only 1 percent or so decide to pay in this “try before you buy” business model.

The new alliance gets rid of this. Both NeoEdge and Double Fusion let Yahoo insert ads into the fabric of the games. Or they can run 30-second video ads at natural stopping points in the game.

Since those ads are more effective and are easy to measure, they can generate much better returns than the other ads on Yahoo’s simpler games.

Laughlin said that Yahoo Games will have more than 400 ad-supported downloadable games by the end of the year from major publishers such as Real Networks, BigFish Games, iWin, Oberon, PlayFirst and Sandlot Games.

Jonathan Epstein, chief executive of Double Fusion in San Francisco, said that the move to free games could generate considerable growth for Yahoo and could mark a turning point for the U.S. industry. Asian countries have embraced more creative business models for games, but the reception hasn’t been as enthusiastic here. Epstein said that Double Fusion’s technology can essentially serve as a “wrapper.” The company puts the wrapper around an existing game and that enables it to insert ads into the game or show 30-second videos at convenient points.

Alex Terry, CEO of NeoEdge in Mountain View, Calif., said his company has a similar technology. Both NeoEdge and Double Fusion can get a cut of the ad revenues from Yahoo, while Yahoo can presumably gain more users for its games — and therefore more ad revenues — by dropping the price to free on many of the titles.

Terry also said Yahoo’s move will be a boon for the game ad industry. Everyone has been waiting for Yahoo Games to make its move. Google bought in-game ad firm Adscape a year ago, while Microsoft paid $200 million to $400 million to buy in-game ad firm Massive. By selecting two firms as partners, Yahoo Games can ensure that it has an open, price-competitive and independent source for its key technology.