Developers Comcept, Spark Unlimited, and Team Ninja are making a strong statement with Yaiba: Ninja Gaiden Z. How people take this message may vary depending on their point of view, but from my perspective, this new Ninja Gaiden exudes a bold stance of series reclamation.

When the designer who lead the effort to pull the series into the modern age, Tomonobu Itagaki, left Team Ninja, fans worried that the series would suffer. With Ninja Gaiden 3, Team Ninja had a chance to grab the series and pull it out from under the shadows of the highly regarded Itagaki-designed titles. It really could have proved that Ninja Gaiden was still in very capable hands. This attempt, unfortunately, met a lukewarm reception from both critics and fans. Mediocre, some would say, would be kind.

From what I saw in a demonstration of the Xbox 360 version of Yaiba: Ninja Gaiden Z (coming to PlayStation 3, Xbox 360, and PC in 2014), the three teams don’t seem interested in falling into the same expectations trap. They don’t have to tell me with words that this is their stance. Hell, they can flat-out deny it. Yaiba: Ninja Gaiden Z, however, is giving me this message loud and clear. 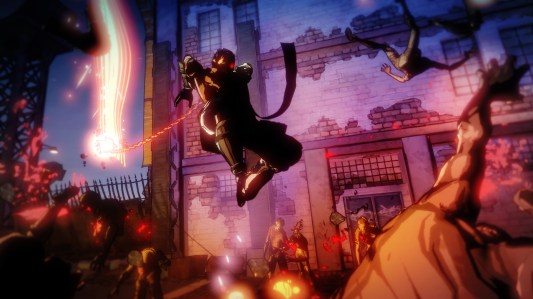 Although screenshots released earlier have revealed that the game would be using a toon-shader-based art style, it is still a bold art direction to take. Modern Ninja Gaiden titles on major consoles have been pushing for that stylized uncanny valley look, attempting to make anime body proportions and insane boob bounce seem tangible. With Yaiba, that visual philosophy is gone. It’s all sharp dark lines mixed with a purposeful color palette. It looks like the Ninja Gaiden an illustrator would design. It’s confident and aggressive.

We load up the single-player campaign and are treated to a cutscene paying homage to the original NES intro. Two ninjas are about to clash swords: One is the honorable series mainstay, Ryu Hayabusa, and the other is a drunken asshole named Yaiba. The two ninjas collide, steel swords whooshing through the air and clanging into each other, and as most cinematic ninja duels end, Yabai stops for a slight pause. His sword suddenly falls apart, and in an explosion of blood, he’s left with one less arm (explaining why he gains his bionic arm). Yaiba is the anti-Ryu, a raging antivillain with a psychotic lack of empathy and a hard-on for random murder. For cutting off his arm, Yaiba swears revenge on Ryu, but the gesture is superfluous. Yaiba was likely going to murder him anyway.

On the surface, this is just a bad-ass character, but I find it shocking and interesting for a slightly different reason. Team Ninja wants us to play a character that is trying to kill off the series’ traditional star, Ryu Hayabusa. Is there more to this? 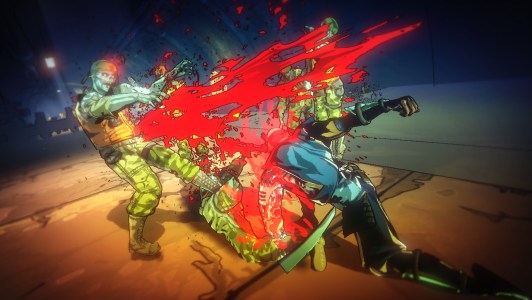 Above: All this contaminated zombie blood splashing on everybody, yet no risk of catching the undeaditis going around?

I am finally handed the Xbox 360 controller and mentally prepare to assault a large group of zombies. I start shoving around the right stick with my thumb, but get no response. Years of horrible camera design have taught my hand how to adjust to a wonky viewpoint first, before ever figuring out what the rest of my controls do.

As I continue to flick the right stick, I notice that I am not seeing the incredibly flawed camera control of the previous Ninja Gaiden games. I typically expect my viewpoint to fly off into an awkward angle, with both my right and left thumbs having to micromanage between each other to give visual clarity to where my ninja is running.

The solution in Yaiba is to not force the player to control the camera at all. The viewpoint now swings and sits in an optimal angle for each set piece. Although you can pan the camera a little bit in one direction or another, it stays put where it belongs, leaving all of my control decisions focused on Yaiba’s actions.

The other thing I’ve been trained to look for, ever since Super Mario Bros., is the jump button. In Ninja Gaiden, it is traditionally the A button on the Xbox 360 controller. Confusing me even more, A has become a dash! Charles Babb of Spark Unlimited and Tom Lee of Team Ninja notice I am a little confused by this decision and explain that turning A back into a jump button is a hotly debated topic among the design team. I start to give it some thought as I slice through the undead and begin to see the logic. Beat-em-ups are very horizontal in action. Outside of doing aerial combos, why would I ever want to leap vertically in the middle of a fight? If I want to escape, the dash pushes me through the crowd and teleports me to wherever I have oriented Yaiba. It has the added bonus of putting me in advantageous positions quickly, which puts me right into another combo situation — keeping my hit meter climbing. It becomes both an eject button and a combo-string generator.

I’m getting into a good flow punching through crowds with my bionic arm, slicing torsos in half with my sword, and swinging zombies around at the end of my chain weapon when I run into one of the minibosses: a zombie clown. I start slicing the bozo up when Charles suddenly tells me to hit a specific button combination. Yaiba suddenly slices off the clown’s arms and turns them into a pair of nunchaku! Charles then shows me a menu system featuring the arm nunchakus as a special weapon that can only be accessed through (literally) certain enemy characters. He starts to exit the menu screen when I notice something: an icon that looks like bagpipes?!?

What the hell is that?!? Charles and Tom are hesitant to say much of anything about it, but both have grins on their faces. All I need to know is that it is an improvised weapon I can create out of an enemy’s body parts. This underlines one aspect of Yaiba that also separates it from the series’ norms: a very self-aware sense of humor. It’s a game about ninjas slicing up zombies, after all. I’m not sure that scenario is supposed to be taken seriously in the first place. 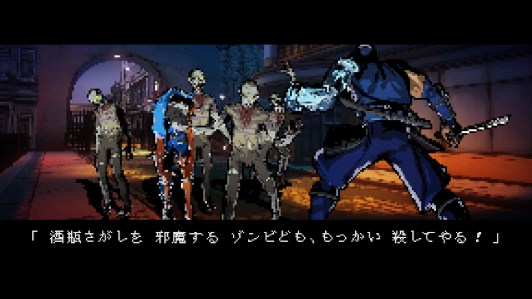 Above: Which one of you hit the pixelate filter button? Was it you? How about you!?

At this point, Charles switches us out of single-player and into a new game type specifically prepared for this meeting: Arcade mode. I’m presented with the Yaiba: Ninja Gaiden Z title screen but rendered in old-school bit graphics. When the game begins, I am thrown into the same Yaiba: Ninja Gaiden Z graphics and combat gameplay, but this time the camera is locked in a side-scrolling view with an extremely linear “left to right” level design. It’s an obvious homage to the beat-em-up genre’s golden age of the late ’80s and early ’90s, which also happened to be extremely addicting. The consistency of the camera viewpoint allows for a lot more visual clarity than any chase cam could provide, which put me in a much more confident position to really try pushing the combo system. I can easily see Arcade mode becoming a sort of training mode for discovering combos to use in the single-player campaign, but with the right tweaks and a competitive leaderboard, I can see this mode’s replay ability possibly surpassing the single-player campaign.

For the last 24 hours, I have been left reflecting on how incredibly opposite Yaiba: Ninja Gaiden Z is to the modern Itagaki Ninja Gaiden formula. It still retains the familiar base design of the combat system with blocks, parries and combos. The game hasn’t lost the Ninja Gaiden core, which is still about ninjas doing ninja shit, but the message of change is so bold.

The art direction, the setting, the narrative, the camera decisions, the little tweaks like swapping jump for dash, the protagonist trying to annihilate the previous games’ hero — all shape my interpretation that Team Ninja is done trying to ape Itagaki’s era of Ninja Gaiden. They also just might be done trying to crack the impossible code of what the fan base vaguely thinks a modern Ninja Gaiden title should or should not be. For Team Ninja, Spark Unlimited, and Comcept — Yaiba: Ninja Gaiden Z is their Ninja Gaiden, not Itagaki’s. This is a statement not being spoken through words but through art direction and gameplay. Although this may piss some fans off, the current build of Yaiba: Ninja Gaiden Z exudes so much confidence that it has convinced me that angering a few people may wind up being a good thing.

Tecmo Koei’s Yaiba: Ninja Gaiden Z is releasing on the Xbox 360, PlayStation 3, and Steam in 2014. GamesBeat was given a private demonstration of the game, where a lively discussion on game design and the Ninja Gaiden series was had. Donuts were offered. I don’t eat donuts — they go straight to my hips.