Game investments in 2013 aren’t following the conventional wisdom about how venture capitalists invest in the fast-growing sector.

Sana Choudary, chief executive of YetiZen, crunched some numbers based on data collected by the Raymond James investment bank and Crunchbase. 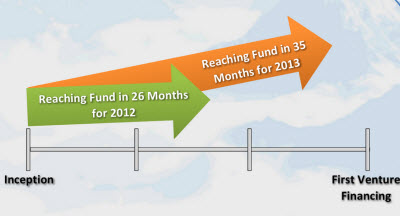 Above: The time it takes for game startups to get VC funding is stretching out.

“Earlier this year, a lot of the press said game investments are dead,” she said. “They also say that VCs don’t invest in games. They invest in platforms.”

That reportedly stems from the notion that VCs invest in technology, but they don’t like picking the hits like Hollywood movie moguls. After filtering out all of the noise, Choudary, who spoke at the AppNation event in San Francisco, found the opposite was true.

YetiZen tracks the numbers for its own startups. The company is an accelerator for game startups. It helps train about 16 to 20 entrepreneurs a year on how to run game startups. (Disclosure: I’m an unpaid mentor for YetiZen’s companies).

The data filtered out seed investments and Kickstarter crowdfundings, since those don’t often lead to bigger VC investments and they often reflect the personal investment strategies of industry angels. But the professional investors — venture capitalists — who make the bigger bets are the ones Choudary focused on. She excluded follow-on investment rounds and found that in 2013, there were 10 investments in game studios, compared to seven in 2012. Meanwhile, there was only one investment in a game platform in 2013, compared to three in 2012.

“More game studios were invested in than platforms,” she said. “The myth is the game platforms are getting the investments.”

YetiZen also found that the first round of venture funding is coming later and later for game studios. In 2012, the average time it took for a game studio to receive venture funding was 26 months. In 2013, that stretched out to 35 months.

Meanwhile, the median investment has gone down from $4 million in 2012 to $1.95 million in 2013. And the companies getting VC funding this year have received funding after they already had significant traction with hits in the market. Those include Plain Vanilla, Bash Gaming, Kiwi, Pluto Games, Bee Cave Games, Hammer & Chisel (an exception that hasn’t launched yet), and Arkadium.

Choudary said the amounts may be lower this year because VCs are coming in at a later stage, when the need for cash is lower. Game companies are also shifting tactics, retargeting demographic categories such as women over 30 or social casino gamers instead of midcore gamers, or hardcore gamers who enjoy snack-like, shorter games. It may cost less to target these groups. VCs may also have fewer dollars to invest in new firms, as they’re putting a lot of money into follow-on rounds for existing investments.