YIIK: A Postmodern RPG (or Y2K) is a surreal role-playing game from developer Ackk Studios and publisher Ysbryd Games. It draws inspiration from Japanese RPGs like the heartwarming EarthBound and ultra-stylish Persona, resulting in a pop culture oddball that stands out in a genre that’s replete with swords and sorcery. It’s slated for release later this year for PC, PlayStation 4, PlayStation Vita, Nintendo Switch, and Nintendo Wii U.

In a hands-on demo at the Electronic Entertainment Expo last week, I ran around YIIK’s hometown as Alex, the bearded flannel-wearing main character who looks like he a) knows what kombucha is and b) definitely knows how to brew it.

I didn’t have a chance to get too far into the game, but from what I saw, it places a premium on personality. It has colorful aesthetics as well as a quirky battle system. Characters wield items like vinyl records and yo-yos, using them in twitch- or rhythm-based minigames to fight enemies, perhaps inspired by the innovative battle system in the indie smash hit RPG Undertale.

Andrew Allanson, the co-creator of YIIK, said that the wacky weapons are also just a byproduct of its modern setting.

“In fantasy, it feels normal for a guy to have a sword, but if it was set in 2017 what’re your options? A gun? A knife? None of that really lends itself to telling stories that are usually appropriate for RPGs,” said Allanson in an email. “So, if you go for more silly weapons like vinyls, baseball bats, yo-yos, you’re bound to get a quirky game.”

YIIK definitely has a hipster vibe to it, complete with its love of all things retro. At the start, it feels like a slightly self-indulgent coming-of-age story for the much-maligned millennial. But Brian Kwek, founder of Ysbryd, said that the story is about Alex’s personal journey, the people he meets, and the conspiracies he uncovers. It’s set in 1999 when government conspiracy TV shows like The X-Files were at peak popularity and everyone was afraid that everything digital would be obliterated once the year hit 2000.

“Alex, the main character, is actually kind of an asshole, at least you’ll see that in the beginning,” said Kwek in an interview with GamesBeat. He added, “The journey that Alex takes is one that — I think I’d like to believe — in real life people really go through that introspective stuff.” 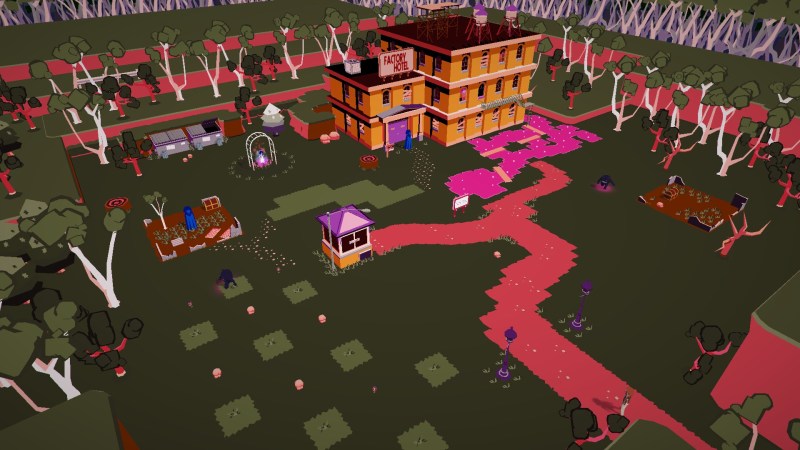 After graduating from college, Alex returns home and is immediately drawn into an Alice in Wonderland-esque mystery. He follows a cat to an abandoned building and meets a woman named Sammy, who gets sucked into some kind of dimensional rupture in spacetime. As he tries to find her, he joins a small cadre of conspiracy theorists on a message board.

It’s a story that Allanson says goes into some unexpected places and he’s hoping will appeal to a wide variety of people, from fans of Bryan Lee O’Malley’s Scott Pilgrim comics to Haruki Murakami (1Q84, Kafka on the Shore) books to Japanese visual novel games.

YIIK signed on with Ysbryd in 2014, so it’s been about 3 years in the making.

“It was difficult balancing story and gameplay sections. Getting them to feel fluid,” said Allanson. “We wanted there to be a nice balance of puzzles, exploration, conversation, and battles. We spent a lot of time taking things out, adding them back in, etc.”

For Ysbryd, the main draw of the game are the characters and story. They’ve previously published titles like VA-11 HALL-A, a cyberpunk bartending game developed by Sukeban Games in 2016, and dystopian puzzler She Remembered Caterpillars by Jumpsuit Entertainment earlier this year. Both place heavy emphases on character, with VA-11 HALL-A featuring a multiple branching narrative decisions.

“From our point of view as the publishing label, we want to shine light on maybe the darker side of humanity that hasn’t been necessarily been addressed before,” said Kwek.