Yutaka “Yoot” Saito made one of the most memorable titles in video game history, Seaman for the Sega Dreamcast. And he delighted his fans at the recent Game Developers Conference (GDC) in San Francisco by giving a post-mortem on the absurd game with a talking fish 18 years after it debuted.

Saito, 54, is still making games in Tokyo. But he is best known for Seaman, which has become a cult classic because it was such an unlikely and unexpected title. In the game, you used a microphone to communicate with a very rude and unpleasant fish with the face of a man. It was exactly the kind of game you would never predict would be a commercial success, and that is why it was. It is still looked upon with endearment and as a good example of artificial intelligence in a video game.

As a young developer, Saito created his breakthrough hit, The Tower, in 1994. It was a simulation of building a skyscraper. He published it on the Macintosh in Japan, and American game publisher Maxis (later acquired by Electronic Arts) loved it so much that it republished the game as SimTower on a global basis. After that, Sega wanted Saito to work on a new game for the Dreamcast console.

Before the game got under way, a Sega executive gave Saito and his team at development studio Vivarium several options for the kind of game they could make that would be a “guaranteed hit.” One option was an improved version of a Dungeons and Dragons style game with a more evolved game system.

Another option was an adventure game using famous licensed Hollywood characters. But, it would cost a lot. And the third option was for a game with a rare beast that was like nothing ever created.

“I wound up going with option three,” Saito said.

That option required invention and courage, he said. 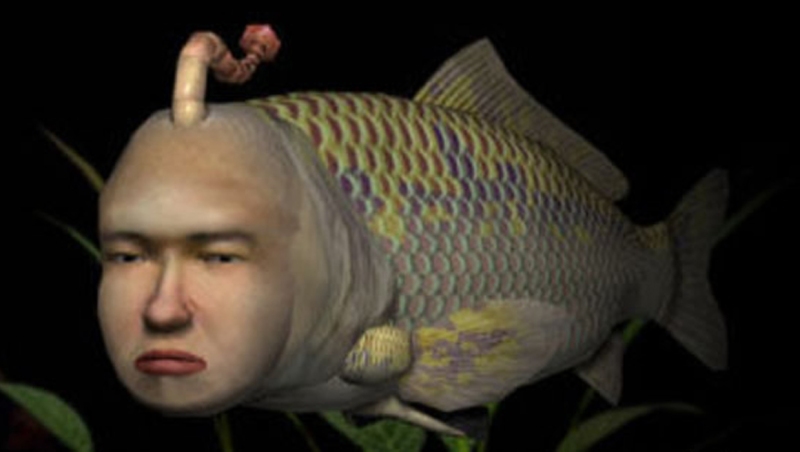 Above: Seaman was the virtual pet that gave kids nightmares.

The inspirations for Seaman came from a few different places. Saito showed some early sketches of the Seaman creature, each with very different looks. Asked how he came up with the idea, Saito said his father took him to a museum as a kid, and he learned about the discovery of a creature called the “coelacanth” and how scientists thought it was long extinct. He wanted to repeat this feeling he had with the viral marketing campaigns around Seaman, which was said to have been discovered in Egypt in the 1930s by an explorer named Jean Paul Gasse.

The inspiration also came from another direction. Vivarium, which had its headquarters in the trendy Roppongi district of Tokyo, had an aquarium simulator that was already in development. So, the team was trying to figure out how to make use of that simulator.

“This crazy idea all started with a lunch time joke,” Saito said. “I was on a roll, and so, I kept saying more stuff. I remembered a skit in a comedy show. The character looked at the screen and said, ‘What are you looking at, you dumbass?’ I started thinking about a fish, being stared at in an aquarium, saying the same thing. The fish may say, ‘What are you looking at,’ or ‘Just let me sleep.'” 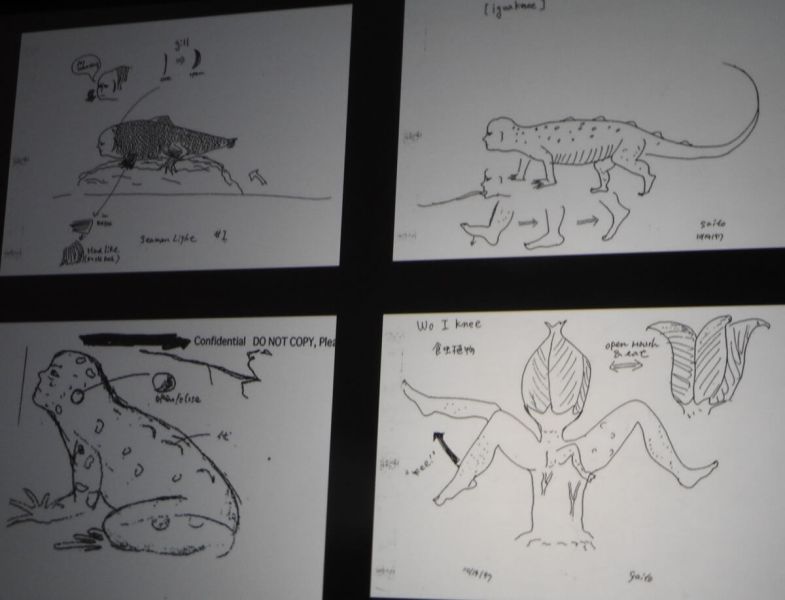 Above: Early sketches of Seaman.

Saito also thought of creatures known as “sea monkeys,” which could be hatched and bred. Then, he thought of the name “Seaman.” Saito did some sketches and showed the Seaman character to his wife, and she hated the way Seaman looked. But, she was still intrigued at the idea.

“But you said you hated it,” Saito replied.

“Yes, but I can’t stop thinking about it,” she said.

Saito decided that the more people hate something, the more they become obsessed with it. So, Saito proceeded with the character who seemed to be very unlikable but memorable. It would be a fish that insulted its owner.

“If you succeed in making someone have … hate for something, the more your mind becomes preoccupied with it,” he said. “Maybe this kind of creepy, creepy game could make people get interested in it.”

Saito crafted Seaman as a character who looked right at the user, staring into the living room. The developer had a loyal team that believed so strongly in him that they quit their jobs to join him. Saito wrote all of the dialogue himself because he wanted to have consistency in the responses to questions.

“I wanted this game to confuse reality and fantasy,” Saito said. “This game character looks right into the camera. He talks like a user. I wanted to create a common link between users and Seaman.”

He felt the conversations between players and Seaman should be interesting, as if the talk was leading somewhere important. Eventually, he said, the conclusion was that the pet was raising you all along, not the other way around.

Saito had a hard time coming up with the voice of Seaman. Which actor should do it? It turned out to be a huge headache in development. Saito himself became the narrator, and he said, “This voice actor guy didn’t cost anything and could do retakes anytime they wanted.”

For the U.S. version, Sega hired Leonard Nimoy, who played Spock in “Star Trek,” to do the narration. Nimoy did the narrating, and another actor provided the voice of Seaman, who said things like, “I’m hungry. Feed me.”

“The results were great,” Saito said.

At the start of Seaman, you started with an egg. You incubated it and hatched it. While you waited, you learned about Seaman’s history.

When Seaman debuted in July 1999, it was late in the Dreamcast’s cycle. It was not a gigantic seller, but it appealed to people who were not Dreamcast fans, and it a larger percentage of female gamers played it than other titles, Saito said. It also became a kind of social phenomenon.

The advertising focused on the term “raising,” as if it were a nurturing game.

“I heard stories about people in bars saying they had to go home to feed their Seaman,” he said.

It was even released on the Sony PlayStation two years after it debuted on the Dreamcast.

“To be frank, I didn’t think Sega believed it would sell that much,” he said. “I agreed with that. I found that they didn’t order enough voice microphones to go with Seaman. We ran out and had mounting back orders.” 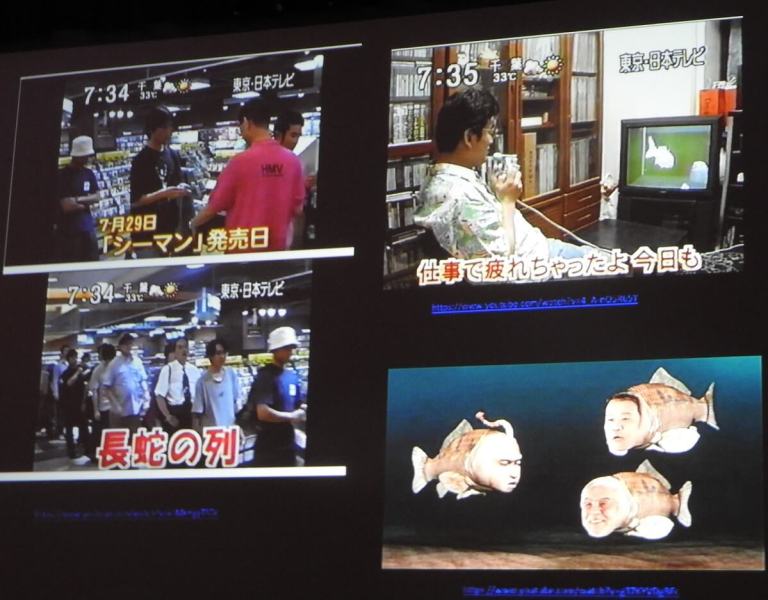 Above: Seaman became an obsession for fans of the Dreamcast.

Saito’s most recent game was Aero Porter, a puzzle game in which you sort luggage at an airport. It debuted on the Nintendo 3DS in 2012. He also tried his hand at the app market with EarthBook, which released in 2015. He is now back to making games.

At one point during his GDC talk, Saito said, “I’m a little bit nervous today.” A fan replied, “It’s OK. We love you.” And that was followed by a round of applause.

To create a new category of game, it takes a lot more than just better graphics, he said. You have to approach it with a conviction that is “stronger than [a] rock,” he said.

At the close of this talk, Saito said, “Don’t be afraid to make something unconventional. Do not try to predict the future but just make it.” 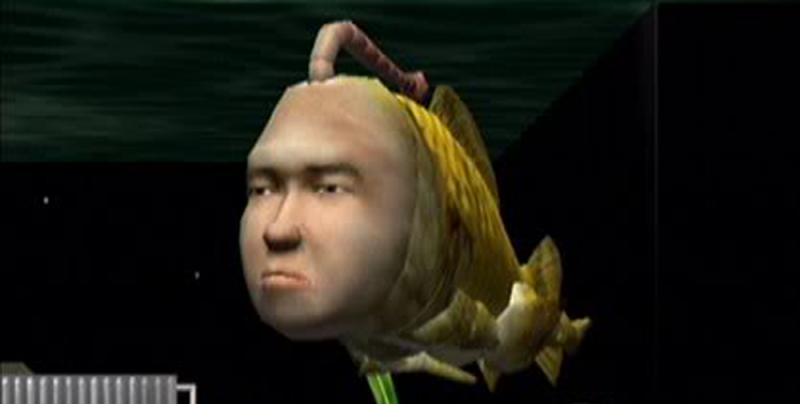 Above: Seaman was really ugly.