Sony Online Entertainment wants Landmark, its upcoming persistent fantasy world, to belong to gamers. You can think of it like Minecraft, but with better 3D graphics. Landmark is going to be a massively multiplayer online world on the PC that is built to be customized by players.

Not only can you create your own characters — you can build homes, landscapes, and just about anything else. You can explore the world, fight the evil characters that are planted in the world by Sony’s designers, or just make your mark with a giant construction project.

The best user-generated content from Landmark will be used in EverQuest Next, the remake of Sony Online Entertainment’s classic fantasy role-playing game series. Landmark is in the alpha testing stage now, and Sony just showed off what ocean waves will look like and the ability to go underground and mine minerals (or build your home) in giant caves.

We interviewed Terry Michaels, the senior producer of Landmark, at a recent press event. Here’s an edited transcript of our interview.

GamesBeat: You changed the name to Landmark awhile ago?

Terry Michaels: That was about six weeks ago. We did it when we moved from alpha to closed beta.

GamesBeat: We last talked like a year ago, so — how did you decide to do that?

Michaels: Part of it was that there was a lot of confusion with the names being so closely linked. People didn’t understand the differences between the two games. Landmark is a complete game in and of itself. We wanted to make sure that was clear. We also found that having EverQuest Next in the name made people have a predilection to do things fantasy-based. Landmark isn’t a fantasy-based game. It’s not specific to a genre. We want people to be able to create anything. So we thought that by removing that, it would make it clearer and easier for people to understand the differences between them, and get rid of some of that pre-conceived notion of what Landmark was. 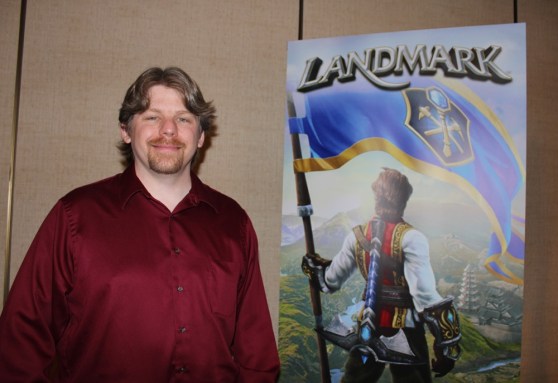 GamesBeat: How would you categorize some of the players right now? Are they people digging around like it’s Minecraft, or are they actually architects or whatever?

Michaels: We have a variety of people playing the game right now. But we focused, through alpha, on the building and the harvesting tools. The people that are playing the game are interested in one or both of those. There’s definitely a group of people out there exploring the world, collecting resources, and in a lot of cases bringing them back to the people who want to build things. We have found so many amazing builders and creators, people with imaginations that just floor me every single day.

We think that with the introduction of caves, that’s going to bring in more of the explorer types. There will be more of the world to go through and see. When we get combat, it’s going to open it up for another set of players, people who want go out and adventure and fight things and collect hard-to-get objects and items in the game and be able to trade those with other people. 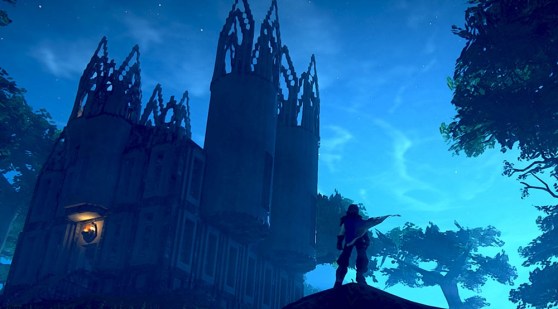 Above: Landmark at night.

GamesBeat: The natural resources — have you tracked how much of those are being created and consumed?

Michaels: Yeah, we track all of those metrics. We do that so that we can make sure that when the economy is put into place, we know how it’s going to function. The right kind of rarities need to exist in the world, things like that.

GamesBeat: If you’re looking for something like gold in the mines right now, what would your chance be of finding it?

Michaels: Different resources are going to have different rarities. You’ll need to go to different tiers of the world and different parts if the caves. The rarity is a little hard to put out there, because everybody can’t be everywhere at once. It’s a game about exploring and finding these things. You may, in two minutes, find an amazing gold mine. For me, it may take me 45 minutes to find one, just because I’ve been looking in the wrong place.

GamesBeat: If you dig down, you can dig a hole so deep you can’t get out. You could use the grappling hook, I guess?

Michaels: Yeah, we have rope movement for that. We also have ways for you to do things like teleport back to your claim, or go to the central part of the island. In a world where you can change everything, we know you’re going to get into situations where you have difficulty getting out. We’re going to make sure that players have lots of ways to overcome those obstacles.

GamesBeat: I could just dig a bunch of holes and see if anyone falls in.

Michaels: You could, but if it’s not on your claim, then they’ll eventually heal back up. They won’t stay there forever. We don’t have Swiss cheese world where everybody’s dug holes.

GamesBeat: You thought about that, then.