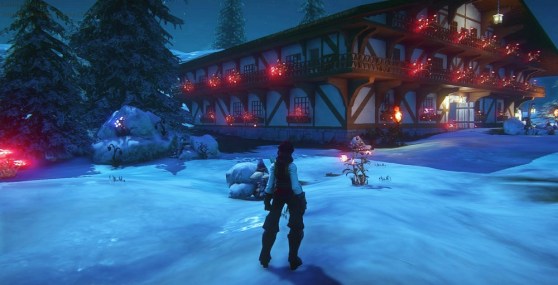 Above: Landmark in the snow.

Michaels: We have a fair idea of how people might want to grief in the game, so we try to make sure those are covered by the mechanics in the world itself. People have begun inventing their own games. There’s this game where someone on a claim has a template for a cage. Both players have it, and the goal is to put a cage around a player on the fly, as they’re building, and trap them in there. It’s such a cool creative way — it’s beyond even the stuff we have right now, building a castle or a spaceship. It’s using the tools to do something creative and fun. I think, as we add more stuff, you’re going to see more of that.

You talked about the grappling hook. I’ve seen people create grappling hook courses on their claims. Who can get the farthest before they fall? Players are already creating things in the game that are their own kinds of games.

GamesBeat: The idea of a game within a game is a valid one here?

Michaels: Absolutely. We want people to be able to create the kinds of things — we’re giving them all these little pieces of games. We’re letting them combine those in whatever way they want to. They’ve already shown us that they can combine them in ways we couldn’t have imagined when we were building the individual pieces. As we add more things in there, it’s going to expand what they can do.

We were talking a bit about the PvP stuff, where we want people to be able to create their own scenarios, build the environments for it, create their own kinds of PvP games within Landmark. That’s a great example of what we want players to do in the game.

GamesBeat: You mentioned it wasn’t genre-specific. If you wind up with a sci-fi world next to fantasy, is that going to be weird for players?

Michaels: What we’ve seen so far in Landmark is that people generally congregate with other people who build similar things. Over time, people will naturally — but we’re not enforcing that sci-fi needs to be near sci-fi. I’ve seen a fantasy castle next to a modern building next to a giant spaceship. We’ve seen those near each other in the world. It isn’t odd. Things are spread out a bit, so it’s not like they’re sitting next to each other. But I’ve even seen someone build those things in their own claim, one next to the other. It works in the game, because it can be anything you want it to be.

GamesBeat: What do you know you’re already going to use in EverQuest Next?

Michaels: At the very least, we’ve seen all of the really interesting and unique building techniques that people have found to make truly detailed, amazing things in the game out of voxels. We’ll be using that in the generation of EverQuest Next. That’s just the very first steps of things that people have done. Six months from now, that list will be incredibly long, the things that we’re going to pull forward.

We want to make sure that while we’re giving people the choice to submit things in the correct art style for EverQuest Next, that’s a choice, right? It’s not like, “Oh, that’s an awesome castle, we’ll put it in Next.” We want people to want to sign up for that. 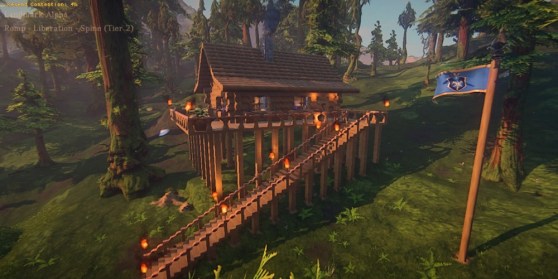 Above: Player-created forest in Landmark.

GamesBeat: Can you make an offer to someone to buy it from them?

Michaels: We haven’t run into that yet. We’ll be running the competitions and we’ll see what people do, what they’re willing to submit. They might become famous, become a part of the development of EverQuest Next. We already know, from what people have been doing, that they’re excited to be involved in the development of a game. I don’t think there’s going to be any real lack of participation as we start opening those competitions.

Players want to be famous, if they’re builders, so that people want their stuff. It’s hard to think of anything more fame-inducing than having a central hub piece in the middle where everyone starts, or having a cool temple that eventually makes it into Next. That’s going to be pretty amazing. I can’t wait to see what people do when we start opening things up.

GamesBeat: Do you have some natural conflict that will get the combat going once you put it in? Something story-driven, something in the lore that’s going on?

Michaels: It’s a living world. We’ve talked about some of the creatures that are going to be in there. There are dangers in the world. There are going to be Venus flytraps, ghosts, creatures that are wandering around the world that will attack players. Now, we’re not going to have the idea that you’ll see a more directed story, something that talks about a natural conflict in the world. It’s just an us-against-them mentality.

GamesBeat: How large is it already, and how large are you expecting it to become?

Michaels: As far as the landmass, it’s enormous, and it’s only going to get bigger. In Landmark, having a part of the world that you can control is an important aspect of the game. As people come into it, we have to add more land. It’s like our world, right? As you add people, they want to have their part of it. We need to make sure that there’s enough land to support them. As far as the total number of islands and worlds, I don’t even know at the moment, because we add so many all the time.

Above: Landmark at sunset, created by a player.

GamesBeat: Have you figured out what you can economically support, though, given the usual rate of pay for a free-to-play game?

Michaels: We’ve done that sort of analysis and based some of our decisions on it. But we’re seeing what players are doing in the game right now. We’ve talked about developing games with our players. We talk about our economic outlook with them. We have the posts out there on our forums, the blueprints of what we’re going to be doing. The open development is all about letting people see what’s going on, so they can see why we make the decisions we make, why we go down certain paths. Things aren’t hidden behind closed doors, where nobody knows the reasoning behind them.

GamesBeat: How would you make this last 10 years? What’s necessary for this to go on? Some games lately have sunsetted earlier than people had thought.

Michaels: We believe that open development, engaging players early on so that we make sure the games we’re making are the ones that people want to play — that’s going to be a key component to it. The result of that development process is going to be something that’s better than what we would have done before.