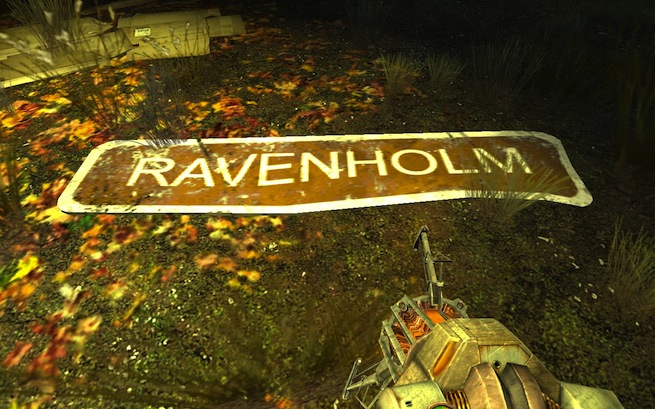 If you couldn’t tell from all of the horror movies playing on TV or the unobtrusive-but-still-confusingly-present Christmas candy displays at Walgreens (or you don’t have a, you know, calendar or whatever), today is Halloween. If you don’t have any parties to go to tonight, or you’re tired of watching movies about large, scary men with knives, maybe you’re planning on spending some time with your favorite spooky games.

You could stick with the old reliable Silent Hills and (old) Resident Evils, but you don’t have to limit yourself to the horror genre to get a scare this year. Several decidedly non-horror games contain levels that will dampen your pants just as well as any fright-focused title.

The Half-Life series has plenty of scares on its own; the first game’s terrifying monsters and claustrophobic settings make for a tense experience. But when circumstances in the second game force hero Gordon Freeman to take refuge in the condemned town of Ravenholm, developer Valve casts the plot’s sci-fi veneer aside and replaces it with absolute horror.

The Ravenholm section starts out slowly, with a few “What happened here?” moments straight out of John Carpenter’s classic film The Thing, but once you figure it out, the level turns into a full-on zombie survivalfest, complete with rooftop standoffs and a climactic showdown in a cemetery.

Ravenholm also introduces players to the dreaded Poison Headcrab, which looks like a giant spindly spider and is capable of dropping your health down to one point with a single hit. It also sounds like a pig covered in rattlesnakes, so that’s pretty scary, too. Almost as scary as the Poison Headcrab Zombie, who is not only tougher than regular Headcrab Zombies but also throws Poison Headcrabs at you.

This level is basically a gas station that only dispenses nightmare fuel. 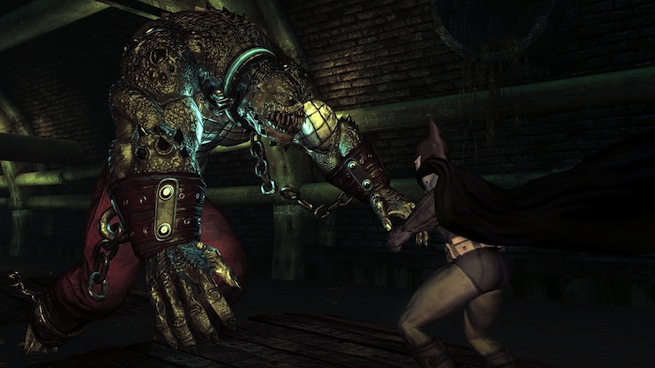 My favorite part of developer Rocksteady’s two Batman games (2009’s Arkham Asylum and the 2011 followup, Arkham City) is how they excel at making me feel like Batman. When you enter a room full of enemies in these games, you don’t think, “How the hell am I going to get through this?” It’s more like, “How long am I going to draw out the horror show for these goons?” As Batman, you have all the tools and abilities you need to take care of whatever the various Arkhams toss at you, and you always feel in control.

Except for that one part. You know which one.

At one point in Arkham Asylum, Batman has to collect samples from a specific plant that, conveniently — or not, depending on how you feel about it — only grows in one place: The sewer system in which the monstrous Killer Croc has made his lair.

All the way at the beginning of the game, Croc makes his position on eating Batman pretty clear (he’s in favor of it, in case you were wondering). Your journey through the sewers is all about taking away whatever control you’ve enjoyed throughout the rest of the story. You have a monster stalking you; loud noises attract him, so you have to be careful how and where you step. Your free range of movement is now confined to a series of platforms running down the center of the tunnel.

Even if you do everything perfectly, Croc will occasionally call out “I see you!” like the damn Sinistar and then come running, like, right at you. You only have a couple of seconds to figure out which direction he’s coming from and fire off a quick Batarang to stop him from nomming on your Bat-bones. While the rest of the game is about Batman putting the fear into criminals, Croc’s Lair pulls the reversal even more effectively than the also-amazing Scarecrow levels.

The Max Payne series is all about a self-doubting badass doing and saying badass stuff regardless of how confident he feels about it. It is, in fact, Max’s uncertainty about any course of action he might take that keeps him relatable, like Die Hard‘s John McClane.

Regardless, Max Payne is capable of straight-up murdering entire arenas’ worth of guys with nothing to protect him but a leather jacket, the inexplicable ability to slow down time, and some magical pills that are apparently capable of closing bullet wounds.

But then, in the middle of all of this, developer Remedy Entertainment throws you up against Max’s most formidable enemy: his own mind.

Suddenly, Max Payne ceases to be a shooter and becomes an unsettling journey into the guilt-ridden mind of a drug addict. And it’s a suitably dark place, filled with the screams and cries of Max’s murdered wife and daughter, weird changes in perspective, and platforming built on following trails of blood through a black void. These levels are disorienting and difficult to get through, and not just because the control scheme is poorly suited to platforming. They are genuinely disturbing.

4. The Unfinished Swan: “Nighttime: The Woods”

The PlayStation Network-exclusive The Unfinished Swan presents players with a magical world of wonder — in its first two levels, anyway. Immediately after that, the game drops you into a dark forest straight out of the beginning of Dante Alighieri’s The Inferno. Dark, that is, except for the lanterns that represent safety and the glowing, demonic eyes of the legion of spiders from which those lanterns keep you safe. 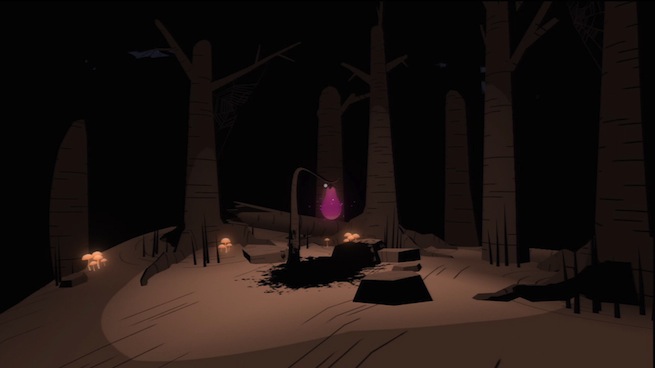 Step out of the protective pool of light and your ears fill with the frantic beating of your character’s pounding heart. The camera shakes, and red scratches appear as the arachnid monsters attack. Get to the next lantern and it returns to normal. Fighting the spiders is pointless — and actually impossible; throwing one of the game’s ubiquitous all-purpose spheres at them only causes them to retreat (temporarily) to the shadows above, which is actually more terrifying because you don’t know where they are or what they’re doing.

It’s all video game magic, of course; the spiders aren’t actually chasing or attacking you, and it’s easy to stay within safe zones. But the change in tone is so abrupt and the atmosphere so effective that it gets really spooky, really fast.

And it’s hard to go wrong with giant spiders with glowing red-eyes.

War is scary. And by that I mean that real war is scary. War in video games, however, looks increasingly like this:

I mean, how awesome is that? Like, the part where he ran in and threw the thing and then all the bad guys died? I just high-fived myself. Literally, I mean; that’s not a euphemism.

Most war-themed video games are more focused on being fun than creating anything even remotely resembling what actual combat must actually be like. Reality has a weird habit of standing in fun’s way, especially when it comes to subjects like global military conflict and the possible loss of millions of lives in nuclear hellfire. A few games, however, like developer Electronic Arts’ fourth Medal of Honor title, Frontline, have managed to mix some genuine scares in with their improbable story of one-man band of brothers James Patterson.

At the beginning of Frontline, Patterson participates in the D-Day landing at Omaha Beach. The level draws clear inspiration from the start of Steven Spielberg’s chaotic depiction of the same event in Saving Private Ryan. It is not a run-and-gun-fest typical of other first-person shooters (or even later sections of the same game); it is a mad scramble for survival while your fellows scream and die around you and everything explodes. I don’t think this part of the game even has music playing — if it did, I couldn’t hear it over the non-stop explosions and the sound of my own hyperventilation.

My PC gamer friends have always told me that the Omaha section in Medal of Honor: Allied Assault is way better than the pared-down console version I played in Frontline, and I’m fine just taking their word on it.