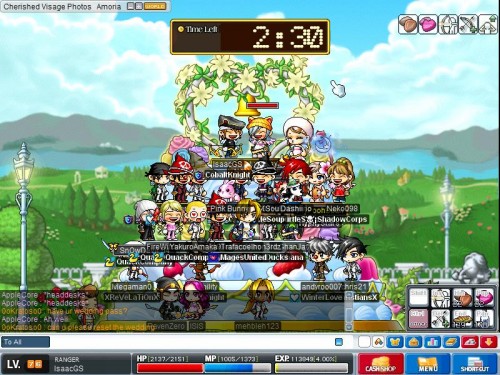 Marriage in online role-playing game Maplestory is serious business. Just ask some of the folks who found themselves marrying other players in the game, or the marriage and family therapist who weighed in on their online relationships.

Marriage expert Athena Carrillo Lee of Mind Body Spirit Therapy in Los Angeles had a few words to say about those who virtually tie the knot.

When asked why people form these in-game relationships, she said, “Some players might forge online partnerships because they see it as advantageous, the way someone might marry for money — no offense to those of you with those values. Others, who play in order to socialize, might forge a partnership because they wish to flirt, romance, and marry, as these are certainly social activities.”

Carrillo Lee rates these sorts of bonds quite positively. “If someone is only capable of social interaction at this level, then I’m grateful they have some level of interaction,” she said.

Sadly, for those looking for romance on Maplestory, the odds aren’t great. In 2010, of the 26,982 in-game marriages performed, 20,344, or 75 percent, ended in a virtual divorce. The good news? If you are still interested in finding love, Maplestory divorces dropped to 46 percent in 2011, at least for North American gamers.

According to DivorceRate.org, the divorce rate in America for a first marriage is 50 percent. That goes up to 67 percent for a second marriage. By the third marriage, it’s 74 percent. So it seems you may have a better shot staying married in a game than in real life.

But just like real life, you have to watch out for angry exes in Maplestory. One married player was hit with the classic, “You’re not the person I fell in love with.” His virtual spouse said he didn’t seem to care about her anymore. It gets worse: The gal logged into his account and started dropping the items in his inventory, and that’s when he decided to cut ties with her. Like I said, marriage in Maplestory is serious business.

As for how to be successful in your online marriage, Carrillo Lee says, “Don’t marry to get something, marry to share something — you. It’s a great way to get to know yourself.”