I am the omniscient god-king of Chicago. I monitor my citizen-subjects through a thousand unblinking eyes and sit atop a digital throne. When I crave amusement, I peruse their mundane factoids, their terrible secrets and vile perversions. When I require tribute, it is immediate and plentiful.  When I demand excitement, the city tears itself open in a million ways all around me. This city belongs to me. And if you inhabit this superconnected, near-future Chicago, you belong to me, too.

Everyone walking these streets knows my name, but few know my face. Such is the role of vigilante Aiden Pearce in Ubisoft Montreal’s Watch Dogs. Ubisoft’s first open-world game designed and purposed specifically for the PlayStation 4/Xbox One generation of hardware, Watch Dogs has towered on the horizon as one of the first true peaks of the new era. And after five years in development, Ubisoft’s newly minted franchise does indeed deliver a dense and potent world built on a foundation of excellent systems despite inconsistencies and a mostly vacant protagonist.

If you’ve ever been to Chicago, you’ll appreciate the craftsmanship that has obviously gone into capturing not just much of the city’s geography but its culture and vibe as well. While not a completely accurate rendition — which admittedly wasn’t Watch Dogs’ goal — the city on display is both a design and artistic accomplishment. While many open-world offerings pack impressive square footage, very few instill that lived-in feeling that — if done correctly — isn’t even noticeable until it’s suddenly missing. Over many days of wandering through Chicago’s moody, trash-covered alleyways and glistening office buildings, everything appeared placed with purpose. 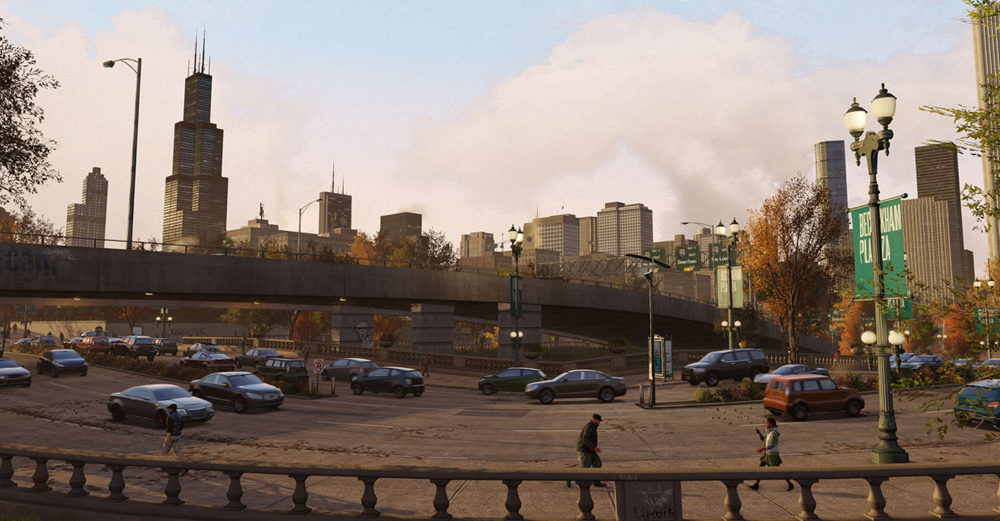 Above: The city streets of Chicago are beautiful and bustling.

The transformation of Watch Dogs’ Chicago from detailed backdrop to interactive playground is the work of ctOS, city-wide software that connects every electronic facet of the city’s infrastructure. By exploiting vulnerabilities in the system, you’re free to hack hundreds of cameras scanning the city; manipulate bridges, traffic lights, and public transit; trip transformers, burst steam pipes, and generally have your way with anything that ctOS system touches. You’ll always find something to interact with in every district of Chicago and its outlying neighborhoods. In Watch Dogs, the city is by far the most reliable and engaging character.

Thanks to the terrifying facial-recognition component of ctOS, extracting information from citizens in eyeshot is as simple as whipping out your phone and peering into their stored profiles. The bulk of Chicago’s thousands of inhabitants roaming the streets are procedurally generated, piecing together faces with names and ages, assigning them occupations, salaries, habits and tendencies from a data bank so extensive that duplicates are rare. Though inconsistencies occasionally arise — like the face of an elderly man paired with the profile of a 22-year-old window washer — the system generates a city’s-worth of varied people that continued to surprise me with new quirks and interactions even after I thought I’d seen them all.

Of course, a mammoth urban jungle is only as engaging as there are ways to interact with it. Watch Dogs understands that need and responds in force. Chicago is dense and fully loaded with dozens of activities to keep you busy above and beyond the hefty 20 hour-long story. And while completely new types of missions unlock as you reach key moments of the plot — investigations revolving the seedier elements of the story — it has enough to do right out early on that you could spend hours completing objectives before ever returning to story missions. 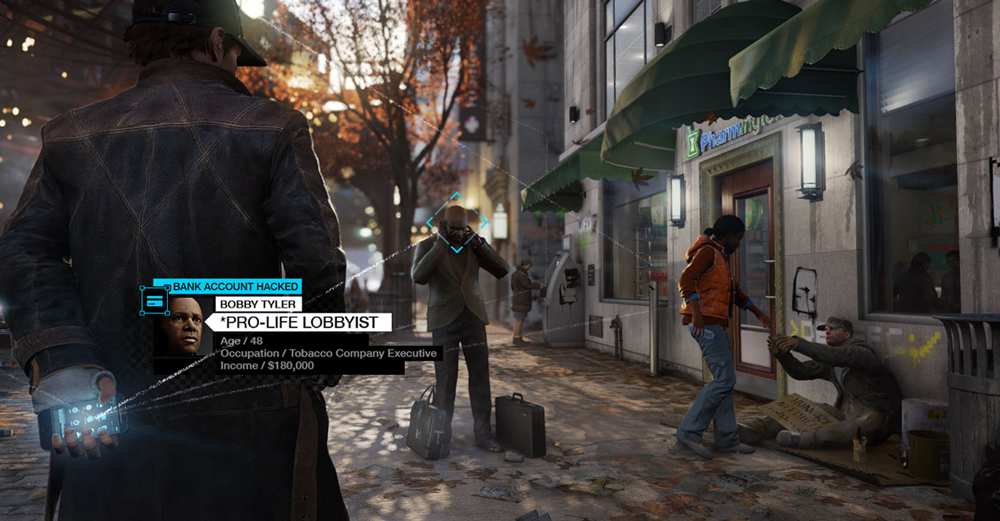 Above: With the ability to hack into bank accounts, your smartphone now also prints money.

Chicago’s neighborhoods are stocked with street hustlers running the shell game, slot machines, and poker games to scratch that gambling itch. If puzzles are more your speed, chess games and challenges dot the city. Additionally, VR code puzzles plaster buildings, and you must view these from a specific camera angle to complete them. And timed puzzles that require creative city navigation are plentiful.

If you’re looking for silly, special graffiti tags trigger alternate-reality games that enable you to blast digital aliens toward a high score or freerun through the streets collecting digital coins. Take your pursuit of recreation a step further and score a digital trip from a shady dealer in a back alley, which are induced hallucinations triggering wild minigames. These digital trips feel like experimental side content that didn’t quite fit the overall scheme. If that’s the case, Ubisoft wisely found a way to work them in because whether you’re mowing down demons in a hell-spawned sedan, bouncing between giant flowers, or annihilating the city in an arachnid tank — which is easily one of my favorite minigames in recent memory — these are over-the-top distractions, and I wish there were more of them.

The serious side of supplementary content comes in the form of side missions and fixer contracts. Fixers are those gifted individuals that have a knack for making problems go away. These are good for a little extra cash and something to do, and I ultimately found fixer contracts and side missions too closely mirrored the same basic mechanics of the story missions — driving, hacking, and gunplay — and tended to drift away from them as fatigue set in.