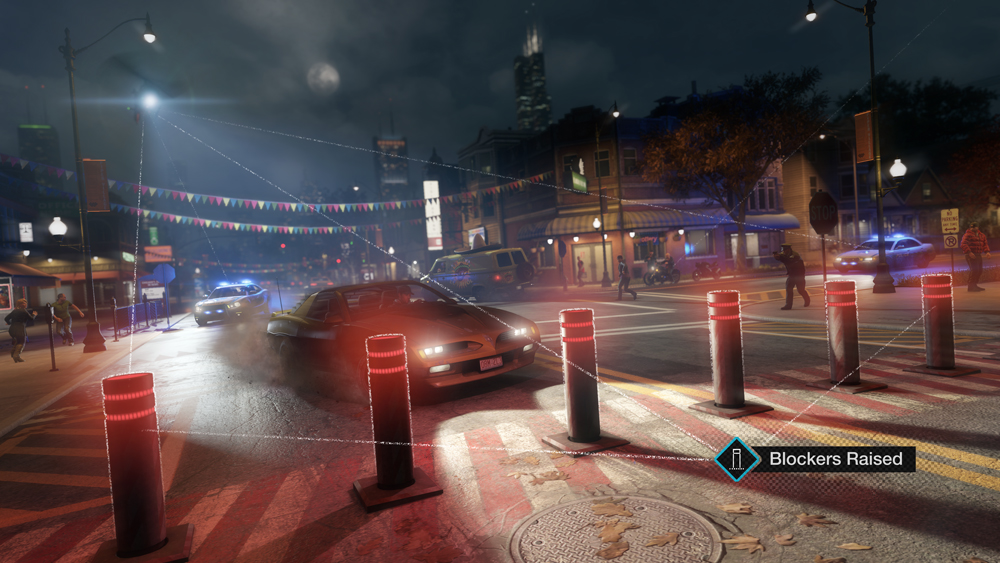 Your skills matter right from the start

If one thing’s waiting for you to wrench it from the content-crammed streets of Chicago, it’s power. Watch Dogs is chock-full of progression from the very beginning of play until long after the credits roll. In standard fashion, Watch Dogs awards experience and skill points that propel you through 50 levels. Its varied skill tree consists of four main branches: hacking, combat, driving, and crafting items. And within the first tier of skills, major advances in both power and utility are available, adding game-changing effects from the get-go.

Sinking one skill point into the driving branch bestows the ability to remotely unlock cars with the all-purpose smartphone, so you’ll never again have to smash through a window. Watch Dogs’ almost always gives you a new form of interaction with the city proper for spending a skill point. This is most obvious in the hacking tree, which opens up completely new elements of Chicago’s infrastructure to activate on the fly, enabling you approach obstacles in creative new ways.

Though the combat tree tweaks the gun-handling mechanics in your favor, repeated trips to that well offer life-saving takedowns on armored opponents alongside the Focus — the obligatory bullet-time in Watch Dogs. It’s a wholly rewarding system that has tangible benefits and ensures progression remains mostly fun and exciting all the way through, rather than a statistical grind to the top of the power index.

Unlockable rewards for hitting milestones along the story and side missions are also everywhere. Completing Criminal Convoy missions unbolts the Destroyer sniper rifle, while checking off multiple Privacy Invasions enables you to order the Sunrim sports car. Every branch carries specialized rewards so side content isn’t just filler; you’re always working toward something in Watch Dogs so time rarely feels wasted. 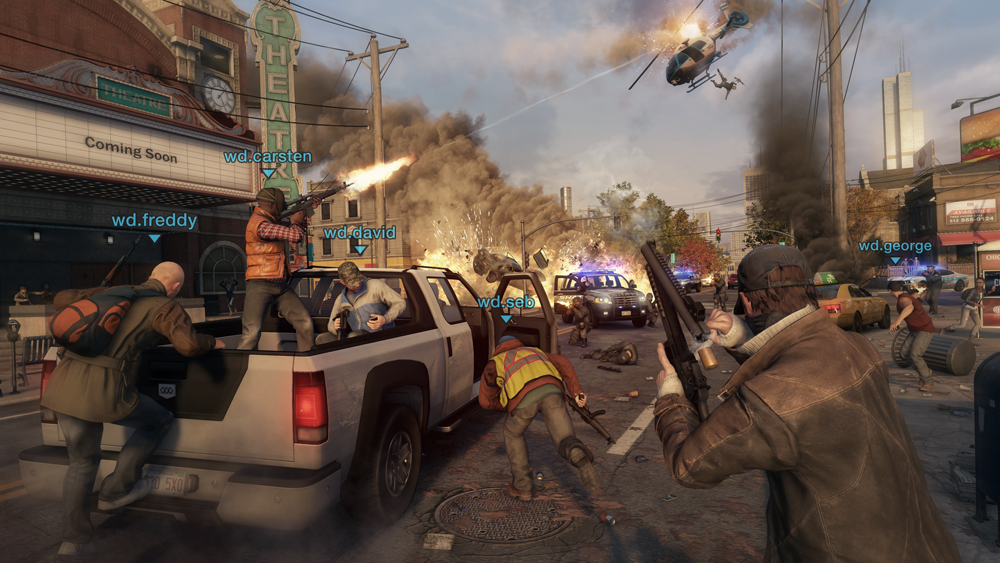 Above: A mob of fixers run wild in free roam, but coordination is key in competitive multiplayer.

Watch Dogs’ seamless multiplayer experience has received a great deal of attention. While it isn’t as invasive as unknowingly being ambushed by an enemy fixer, this does adds another layer of potential challenge. Players may hack into your world, attempting to steal valuable intel before escaping the scene. These moments are tense, as time is limited and you’re given only a general area in which to search for a disguised player that could look like any randomly generated citizen. It’s a fun game of cat-and-mouse that I found more often than not ends at the barrel of a grenade launcher.

Outside of the invasion mechanic, Watch Dogs’ multiplayer includes a number of modes showcasing a bit of everything it offers. Online races highlight the arcade vehicle handling with the city’s hackable infrastructure as a twist. Online Decryption will likely be the multiplayer purist’s mode of choice. Teams attempt to snag and keep a file in high-speed chases or fortified last stands. The intelligently designed kicker is that you don’t actually need to kill the file-carrying player; simply being in proximity is enough to trigger the download, keeping the action moving and intense.

While a benign online Free Roam is also there, the marquee multiplayer event is the ctOS companion app that’s a free download for both Android and iOS tablets and smartphones. The mobile player can control the many facets of ctOS to block, impede, and ultimately bring their target’s car to a crashing halt while the driver kicks the ignition and attempts slip out of sight.

Multiplayer interactions, including the ctOS companion app, were crisp and responsive with little noticeable lag; however, the review was conducted in a closed environment, and launch-day experiences could differ.

By performing well in or winning online matches, players also earn notoriety points that unlock online-specific skills at specific increments. Abilities like an extended car boost, better financial rewards for victories, and eventually being able to see an image of an invading player’s disguise can all be had with enough notoriety points. Best of all, the unlockable multiplayer skills also carry over to the offline portion of Watch Dogs, ensuring that the multiplayer component also carries weight for solitary types. 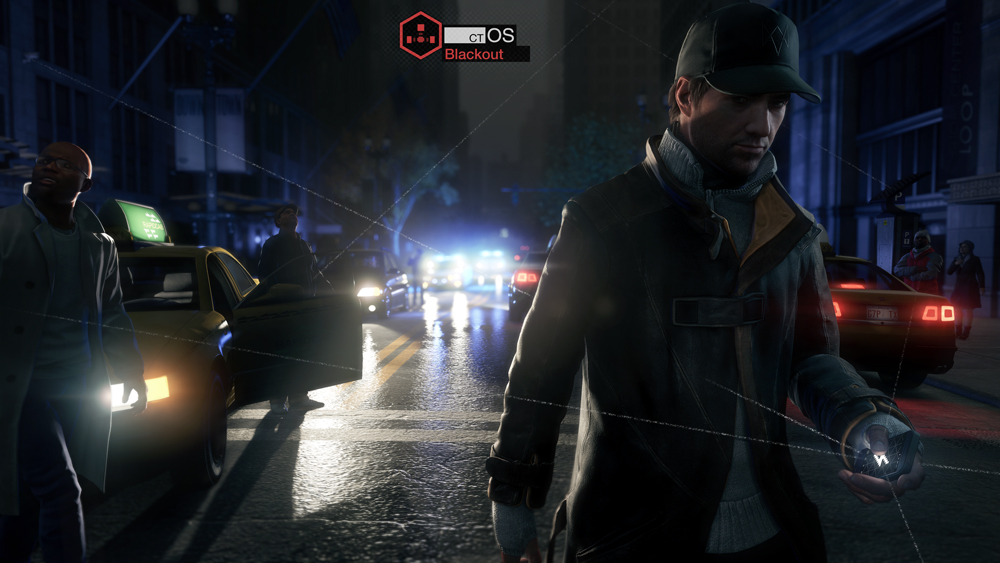 Above: Like his Blackout hack, Aiden’s story goes dark a few hours in.

While Watch Dogs is strong in the core mechanics and content it offers, its bloated tale of revenge and redemption is by far its weakest point. Watch Dogs’ central figure, Aiden Pearce, is a checklist of antihero personality traits that never congeals into a relatable protagonist. He straddles the line between soulful family man and unapologetic vessel of selfish destruction, never committing to one side or the other for long. We’re never given an inkling as to what he’ll do next, which is fitting, I suppose, because it genuinely appears as if Aiden Pearce doesn’t know what he’s going to do next until a secondary character appears to refocus him.

The supporting characters themselves are mostly well delivered considering they all fit neatly into a prescribed archetype: the comrade, the villain, the love interest, the dependent, the comic relief. Aiden Pearce relies on them all to fill out the story, and it’s just a shame these characters are clearly there to flesh out aspects of our hero rather than challenge him. One character shows up for a single mission before disappearing completely.

Though his story begins in pursuit of those responsible for an admittedly heartbreaking loss to him and his family, it detours through a dozen subplots that feel more like busy work. After seeing the things that Aiden is capable of, the resources at his disposal, the lengths he’ll go to get what he wants, it can be hard to swallow the that he isn’t capable of resolving his own problems without first being a pawn in everyone’s own agenda.

Fortunately toward the end, things pick back up and long-awaited resolutions finally start to materialize. Again, it’s a shame the pace adopted in the last quarter of the story — which is still a considerable chunk of content, considering the overall runtime — wasn’t there to keep the story moving all the way through. Watch Dogs’ narrative isn’t bad, and its characters aren’t bad; they’re just not particularly compelling after a few hours, and they don’t return to form until several hours before the credits.