Last week, I got sucker punched pretty badly by a cutscene. But in my defense, I did have my guard down.

You know the feeling from those especially striking scenes — you backpedal mentally, maybe put the controller down for a second because somehow these pixels have started pulling at your heartstrings. It's not a good feeling.

And, really, who would expect to see zombies as an allegory for American soldiers in the happy-go-lucky PSP game, Z.H.P. Unlosing Ranger vs. Darkdeath Evilman? 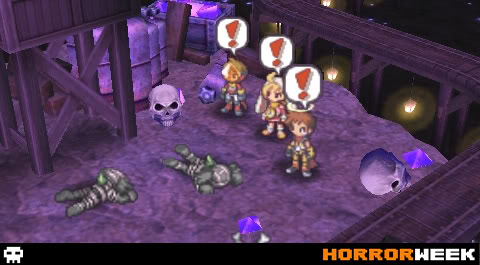 Wandering through the alternate universes of Nippon Ichi Software games, you come to expect a healthy amount of oddity. So I knew what I was getting into when I entered Z.H.P.'s "Bizarro Earth," which is an otherworldly dimension of monsters that mirrors the occurrences and characters found in the human world. In short, if you solve Bizarro Earth's problems, then real Earth is saved as well.

Each chapter of Z.H.P. editorializes a modern problem. This particular chapter's allegory utilizes straightforward symbolism: Black, female American President Oldllama is going to save the world from certain destruction by launching a nuke at the supervillain, Darkdeath Evilman, who is about to wreak havoc in Japan. Darkdeath Evilman would be stopped, but Japan would be wiped out. Oldllama, however, is undaunted. As the American president, "the leader of the entire world," she explains how it's her duty to launch the nuke and repeats how she is doing this "for justice."

So your ragtag trio of characters set out to defeat Bizarro World Oldllama in the purple-hued mines pictured in the screenshot below. Suddenly, in between floors of randomly generated dungeons, your party finds a troop of fallen zombie NPCs scattered across the scene. 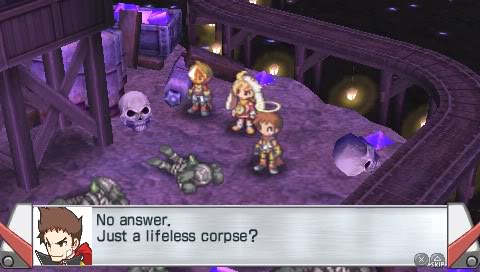 One of your party members, Pirohiko, asks if anyone is alive. Eventually, one of the undead stands up and explains why they were alone and dead on a battlefield:

“We were killed by the Evil Spirit. It’s the direct result of Oldllama’s war. We were sent off to die. Some hero.”

Pirohiko asks the zombie why they’re fighting this war.

“The higher ups talk using justice as a front to kill people or have others killed. People have used justice as their excuse to execute mass murders all throughout history. So what exactly is being called justice this time? What justice has killed us?”

Your head should be hurting by now because the cutscene is hitting you over the head pretty hard with this analogy.

I could've stopped and considered how this representation of the Iraq War compared to more realistically geared experiences like Call of Duty: Modern Warfare 2 and the defunct Six Days in Fallujah. But shaking off this mental noise, I progressed to the next floor of the dungeon. Back to escapism.

What do you think of this allegory? Does it make a good point or feel out of place?