SAN FRANCISCO — Before a crowded room of their peers today, four women from the game industry stood up and spoke out about the online and real-world harassment they have received and what they have done about it.

The panel was one of the first times that Zoe Quinn, one of the victims of harassment, has been able to talk about the controversy of Gamergate, the group that claims to challenge game journalism ethics but that has also led to the harassment of female game developers. Gamergate has struck so much fear into the heart of game development that Quinn referred to it as “Voldemort,” or “He-Who-Must-Not-Be-Named” in a reference to the villain of the Harry Potter series.

“We need some defense against the dark arts,” she said.

Quinn told the crowd at the Game Developers Conference in San Francisco that dealing with harassment for the last seven months was like being hit with an atomic bomb on her head. 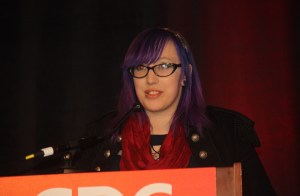 Above: Zoe Quinn speaks about harassment at the Game Developers 2015 event.

“The first week of Gamergate, I didn’t sleep or eat at all,” Quinn said. “It took my friends to drag me out of it.”

Months later, Quinn and her friends created Crash Override as a service to assist game developers and others who are dealing with haters. Her group has allied with the Online Abuse Prevention Initiative, which is tackling the problem from a technical angle.

Quinn received the brunt of criticism and harassment as a result of Gamergate, a hashtag on Twitter that actor Adam Baldwin (best known for the sci-fi TV series Firefly) created in reaction to a controversy that started as a spat between lovers. Gamergate supporters virulently deny responsibility for death and rape threats against women and say they are leading a grassroots movement to address bad ethics in game journalism. But many of the targets of harassment are not journalists nor men.

Quinn said that people who are victims of harassment should document everything. But sometimes the victim may need a friend to go through all of the hate messages.

During the past seven months, Quinn has been threatened and “doxxed,” or had her personal details posted on the Internet. It’s an action meant to intimidate people.

“It sucks” to be doxxed, Quinn said.

To deal with doxxing, Quinn said you should Google yourself and delete old accounts. Check your “Whois” info, and remove information from third-party information brokers like Spokeo. If you have filed a police report about harassment, you can send it to LexisNexis, and it will remove you from a database.

If you feel like you’re going to be “swatted,” you can try to head it off by going to the police first. In these cases, your enemies place an anonymous call to the cops saying you’re holding someone hostage. In response to the prank call, the police may very well send out a Special Weapons and Tactics (SWAT) team, and it can be terrifying. She said that you can go to the police ahead of time if you’ve received real threats and fear that a swatting may happen.

Quinn said the Gamergate incident is not her first time dealing with harassment. Before, others claimed that harassment didn’t exist.

“Now it is harder to play that card,” she said.

This harassment has driven some women have been driven out of the industry. But others are putting up a fight.

“I’m proud of them for staying in the industry,” said Nicole Lazzaro of XEO Design and a member of the audience.

Elizabeth Sampat helped Quinn deal with being the center of the attacks. Sampat is both a game designer and an activist who was also on the panel and faced years of harassment as well. Long before Gamergate in September 2013, she took on the Internet by telling people to “quit fucking going to PAX already,” as a result of sexism issues related to the organizers of the gamer fan event. She received a storm of abuse.

“I know the life of being a marginalized person in the game industry,” she said. “If you speak up or do anything to make the game industry a better place, it’s taken as a given that you have probably been harassed.”

Sampat noted that being a victim of harassment is “not a competition.” Too many victims put up with harassment, she said, because they don’t feel like their problems are big enough to get a response. Sampat worries about the chilling effect that well-publicized harassment cases are having on women in the game business.

Sampat said that she was happy to use Block Together, a tool aimed at deleting offensive comments.

“We are here, and we will help you fight back,” Sampat said. She got resounding applause as she said that.

Neha Nair, who works in user relations at mobile game publisher Storm8, also talked about suffering abuse from fellow e-sports players when she was active in the fledgling community. She was constantly attacked for being overweight and Indian.

“I played online and discovered e-sports,” she said on the panel. “I didn’t know it would be the start of my almost downfall. I was attacked as a woman and a lot for my race. I would ready these comments and sit in my room and cry.”

Then she decided to fight back, putting herself into the community and speaking out.

“Don’t be embarrassed,” she said. “Don’t be afraid. Too many dreams slip away.”

She thinks of herself as a knight in shining armor.

“I am my own knight,” she said. “You will have all of these negative comments. Don’t let it bring you down.”

Donna Prior, a community support manager, said that she encountered a lot of abuse when she worked at Electronic Arts in community support for the massively multiplayer online role-playing game Star Wars: The Old Republic. Upper management made the decision that community managers would use their real names. That was a mistake, as they often had to ban players for misbehaving. Those players could become stalkers, and Prior became a target as the only woman in that role. And there were hundreds of thousands of players on the forums, which had become a toxic place.

“The majority of players are awesome,” she said. “You engage with them. Have a fun community, and have fun doing the things they do.”

She said that community managers who police forums should be anonymous and that developers should back up their managers and not reinstate fans who complain.

“You need zero-tolerance with staff abuse,” she said. “Don’t be a player’s good cop. They will turn on you in a heartbeat.”

All of the women said it was important to create a support network.