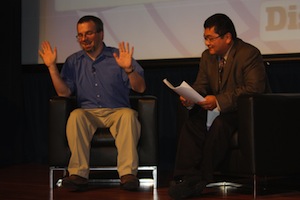 Veteran game designer Brian Reynolds said today that FrontierVille, the game that launched earlier this year, was a way for Zynga to experiment with a new kind of social game design. And the experiment paid off.

Unlike Zynga’s previous games, FrontierVille was put together by the company’s new Zynga East team, which consisted of more traditional game designers and was under the leadership of Reynolds, whose background was in traditional PC strategy games.

Reynolds was speaking at VentureBeat’s DiscoveryBeat 2010 conference in San Francisco. Before joining Zynga, Reynolds led design on classic games like Civilization II and Alpha Centuari (you can tell they’re classics because all of VentureBeat’s writers were basically squealing with excitement when he took the stage). So he might seem like an odd fit with Zynga, which is well-known for being less focused on creativity and traditional game design and more on user growth and retention than on traditional game design qualities (to the point where critics say Zynga is just a ruthless, unoriginal copycat).

One thing that helped with the transition, Reynolds said, is the fact that he wanted to work at Zynga. He wasn’t dragged in through an acquisition — he had already become interested in social games and Facebook, and he wanted to learn the new tricks of social game design.

Plus, some of the ideas that Reynolds learned from legendary game designer Sid Meier still apply at Zynga, he said. Meier liked to build a prototype as quickly as possible, then improve it based on what users do, and it’s the same at Zynga. At the same time, in both traditional design and social design, it’s important not to overvalue with users say they want. In the case of the Civilization games, for example, if the designers followed every player request, the games would have become overloaded with features and forced players to micromanage the game in a way that became tedious.

Reynolds was put in charge of a new team, Zynga East, which included more traditional game designers than the rest of Zynga, and which was focused on creating Frontierville. Executives viewed that melding of the Zynga approach with traditional game design as something of a test that might or might not get exported to the company as a whole.

Not everything went smoothly, Reynolds acknowledged. When Frontierville launched, it saw a lot of user traction right away, but then usage flattened out. The problem was that the team didn’t have an analyst focused on looking at user data, so there were basically a bunch of designers flying blind. Then, when Zynga finally put a full-time analyst on Frontierville, usage started taking off again. Now it has 30 million users, making it one of the company’s biggest games.

Reynolds said those numbers make Zynga say, “Cool, that works. Let’s do it some more.”