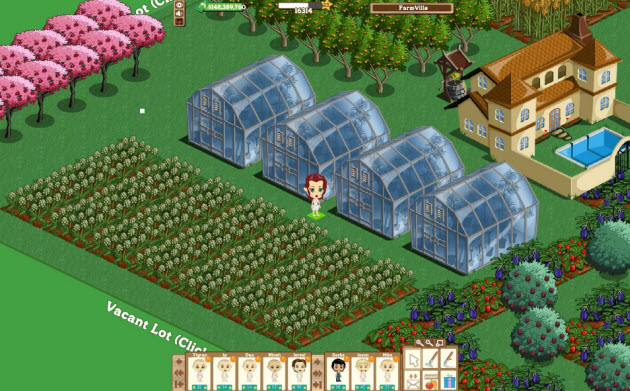 Zynga plans to announce Thursday that its FarmVille game has become the largest and fastest-growing social game in history.

The game now has more than 11 million active daily players since its launch on June 19 on Facebook. They all play their roles as virtual farmers, creating and managing their own farms. On average, FarmVille has attracted more than 1 million active users a week. All told, Zynga now has more than 93 million monthly players across all of its games. That probably adds up to about a third of the Facebook user population.

To me, that’s astounding. I’ve never seen any game spread that fast. Facebook makes money from it through ads, while Zynga cashes in via virtual goods. This brings home the message that we’ve been writing about since the Social Gaming Summit and the Casual Connect conference — that social networking games are on a tear.

The ironic thing is that FarmVille is a knock-off of the Facebook game FarmTown. It shows how a fast follower can copy a game, improve it slightly, and surpass its rival with better viral networking. According to All Facebook, FarmVille has 30 million monthly active users, while FarmTown has 17 million. Zynga put FarmVille together through the combination of its own team working together with developer MyMiniLife. Zynga subsequently acquired the small MyMiniLife team.

With FarmVille, you play, invest and express yourself by plowing, growing and harvesting a variety of crops for money and game points. You can invest in your farm by buying fruit trees and farm animals such as pigs and cows. You can add barns, windmills and greenhouses.

“FarmVille demonstrates the huge market potential of social gaming – in just 9 weeks the game has become a cultural phenomenon,” said Mark Pincus, founder and chief executive of Zynga in a statement. “No other application has achieved what this game has in such a short amount of time. Who would have guessed that FarmVille is now the biggest online game in North America and quickly becoming the biggest online game in the world. ”