After several years of development, Zynga is finally launching its epic action-strategy game Dawn of Titans around the world. The game has breathtaking graphics, enabling players to immerse themselves in a fantasy world where they can wage battles with huge titans and fight with armies that have thousands of troops. It’s the kind of game that you expect to see on consoles and PC, not on smartphones and tablets.

The free-to-play game’s launch on iOS and Android is a big validation for Zynga, which bought developer NaturalMotion for $527 million in 2014. Zynga has struggled in the last few years to regain its glory, and it has had a hard time moving beyond its core casual gaming audience for titles such as Zynga Poker, FarmVille, and Words with Friends. NaturalMotion, led by Torsten Reil, has been the great hope of Zynga in its pursuit of hardcore gamers on mobile devices.

Frank Gibeau, the CEO of Zynga, said earlier that Zynga would launch 10 games during the year, and NaturalMotion’s Dawn of Titans is the final one on that list. Gibeau said that Dawn of Titans is pushing the “creative and technical boundaries of what’s possible on mobile devices,” and that’s also the reason why Zynga took so long to ship this game. Dawn of Titans has been in beta testing in various small territories for more than a year, leading some followers to wonder if the game wasn’t testing well. 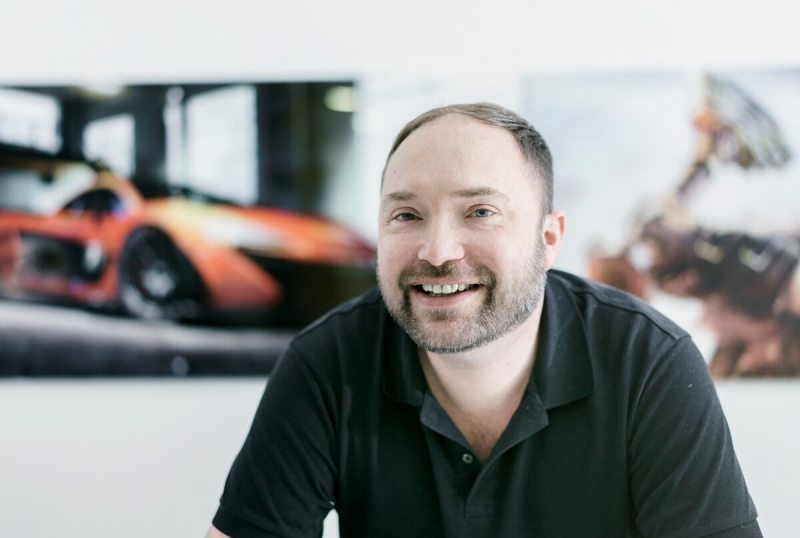 But Reil, who runs NaturalMotion in the United Kingdom, told GamesBeat that the company truly listened to the feedback, making major changes. For instance, he said NaturalMotion completely remade the user interface, adding shortcuts so that you can quickly move to different buildings or launch an attack.

“This is an action and strategy game that is different from anything else in the app store,” Reil said. “At NaturalMotion, we always try to make games that make you go ‘wow.'”

Reil said the idea started when the team wondered, “Wouldn’t it be cool if you could have an epic game with thousands of troops? And wouldn’t it be more cool of you could lead them into battle with even more epic titans?” 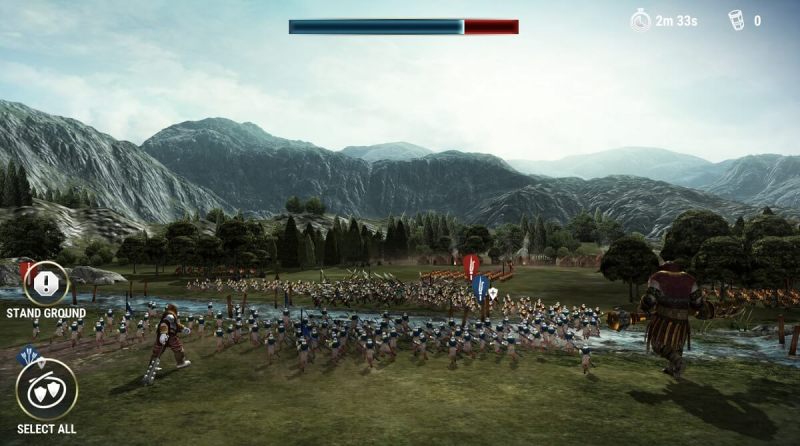 Above: Dawn of Titans. Count all the soldiers.

Dawn of Titans appears to be a real-time strategy game, but it isn’t fully so. You take on other human players, but the battles are asynchronous for now, Reil said. That means you can set up a defense but not actively control it when you are attacked. Rather, the attacker plays in real time against the defense, which has been preset for things like the timing of reinforcements. The game is best played on a tablet, but Reil said the team also optimized it for smartphones.

From what I’ve seen so far, Dawn of Titans really does push the boundaries. The game looks beautiful, and it has some fast action and quick responses when you tap the screen. This is the first Zynga game that will truly wow players with how it looks, starting with the fantasy kingdom in the sky that has high-end 3D graphics such as high-dynamic range, lighting effects for sunlight and shadows, vaporous clouds, waterfall effects, forests that sway in the wind, and even little peasants that walk between the buildings add to the ambient life.

“We are going beyond console, because we can apply it at resolutions that are much better than what you see on a PlayStation 4 or Xbox One,” Reil said. “This is not graphics for graphics sake. It is visuals that help you get lost in a world.” 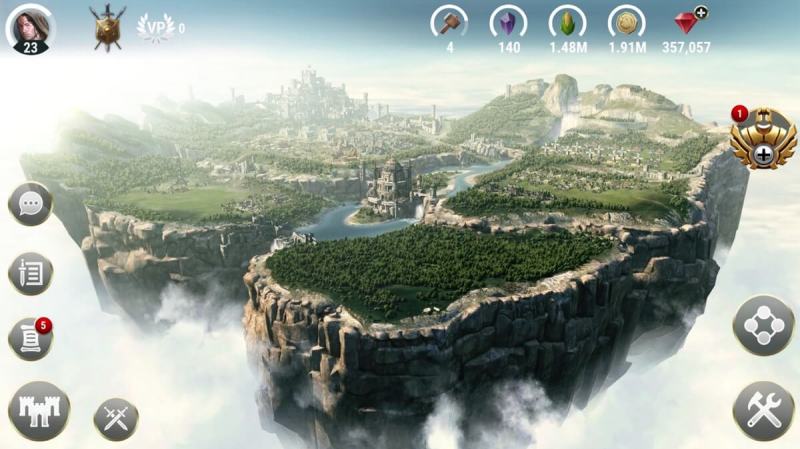 Above: Your kingdom in the sky in Dawn of Titans

You can zoom in on the buildings or zoom out to see the kingdom floating in the sky. While in your fortress, you can build farms, gold mines, armories, and other buildings that help you support an army. You can also craft titans, or larger-than-life giant characters who have magical abilities. A titan can run through the ranks of enemy soldiers and sweep them with a mace as if they were sweeping leaves with a broomstick. You can have several titans in a battle who can tip the scales of the struggle in your favor. You can inspect your titan close up in the Hall of Titans. The titans have cool visual effects, such as flaming axes.

There’s a single-player campaign that serves as your tutorial for multiplayer. Reil said that players blew through the campaign early on, so the team added lots of battles to the campaign.

All of the controls are simple and easy, based on a demo of the game that Reil showed me. To issue orders to a company of soldiers, you simply tap on them and drag them to a part of the battlefield. They will proceed to march in that direction almost immediately and will engage any enemy troops that get in the way. As with other PC-based real-time strategy games, Dawn of Titans has a rock-paper-scissors approach. Cavalry soldiers are fast but vulnerable to spears. Bowmen are weak against cavalry, but the archers are deadly at long range. Your enemy can pit a big army against you and can even spend real money to create a bigger force, but you can win the battle if you use the right strategy during the heat of battle, Reil said. In that way, the best gamer can win. 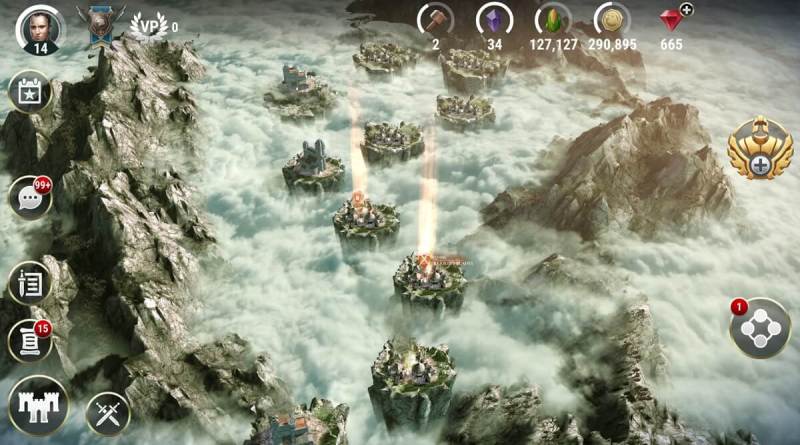 Above: Dawn of Titans has lots of kingdoms.

True to its roots, Zynga’s team made sure that the game was social. Dawn of Titans has features that are popular in the top-grossing games (like Clash of Clans), such as clan warfare. The clan map is also visually pretty, where you can see your own fortress amid your clan members. In a single view, you can see the kingdoms of other clans that are affiliated with yours. If a clan fortress is on fire, it is being attacked at that moment. And if you trace back who is attacking it, you can immediately launch a counterattack at the enemy. Alliances can share resources, chat in-game, and participate in events. The game has leagues and leaderboards so you can see how your clan and your own kingdom are doing in the worldwide competition. One useful addition is a new “pin-to-raid” feature, which lets you and your teammates quickly retaliate against someone who attacked you.

Dawn of Titans is built with NaturalMotion’s proprietary technology and tools, which have been used to create some spectacular mobile games in the past, such as CSR Racing 2 and Clumsy Ninja. That tech is good for rendering thousands of troops, but it’s also great for close-ups on the titans, which come from five factions: Human, Unak, Elithen, Mossmane, and Ragnar. The titans have a variety of sizes and genders, and they each have unique advantages. The game has a Titan Face-off section where you can see how both your titan and the number of your troops stacks up against your rival’s before heading into battle. 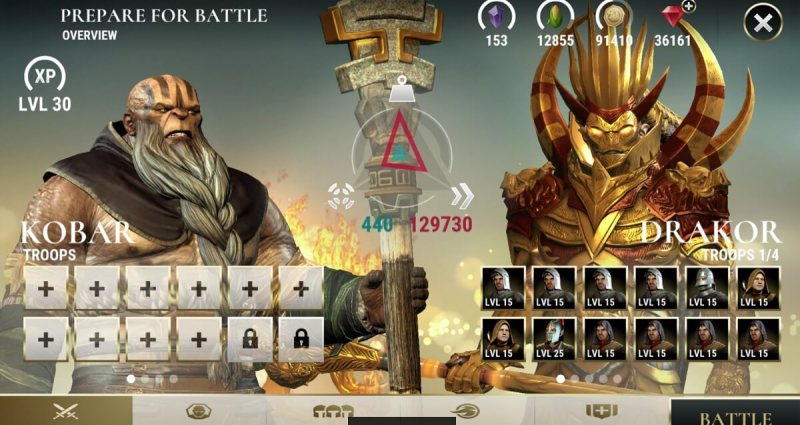 “The cool thing about Dawn of Titans is you can punch above your weight, using your units to flank the opponent to get a bonus,” Reil said. “Or you can protect grenadiers and archers with a wall of spearmen. Yes, this is free-to-play. But how you play the game matters. We believe we found a really good balance there.”

You can prepare for the battle by deploying soldiers and adding more as you assess how strong the enemy is. The game automatically tells you at a glance how strong your attack force is in terms of mobility, strength, and range. When you attack neighbors, you can acquire control of their lands or steal their resources. You can pick your titans and your best troops, and you can also use spells such as freezing the opponent’s titan to help turn the tide. When you win a battle, it’s quite satisfying to see the dead enemies. But there’s no blood. The more you play in multiplayer, the more you rise through the leagues. But if you start losing lots of battles, you can be demoted. 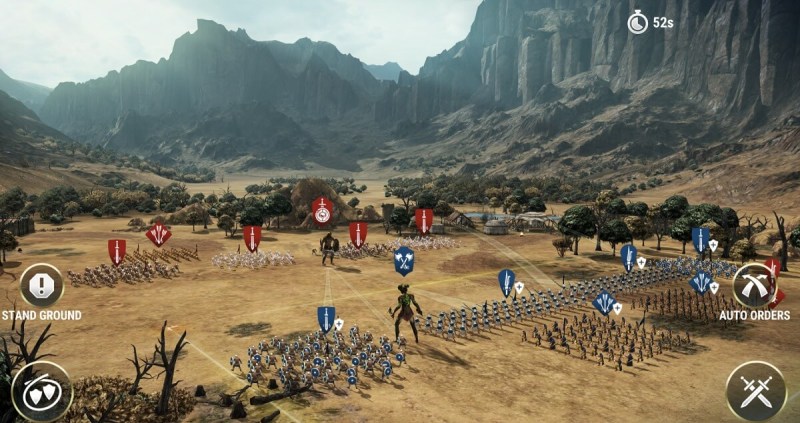 Above: Stay out of the titan’s way.

The custom soundtrack changes dynamically, depending on what is happening the game. Dawn of Titans is available in 16 languages.

Dawn of Titans is going to have stiff competition as Nintendo is releasing demos of Super Mario Run, its first major mobile game, on the same day. Niantic Labs also released Pokémon Go on the same day in July that Zynga released CSR Racing 2. That hurt the audience initially for CSR Racing 2, but that NaturalMotion game came back, and CSR Racing 2 is holding strong at No. 17 on the top-grossing apps in the U.S. iOS App Store.

Reil said that the company will work on regular updates. It is considering how to make the game synchronous, or how to make it work as a esport. But those ideas are on the horizon. For now, alliances are capped at 50 players.