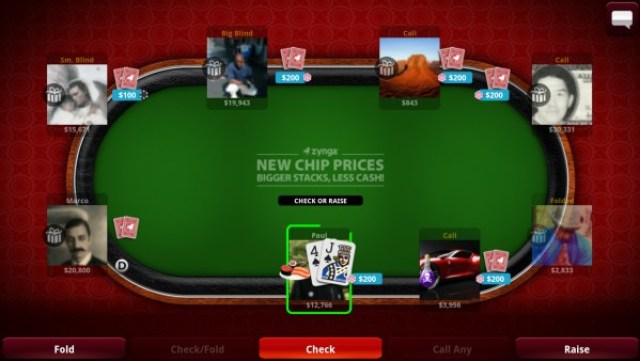 Zynga is finally bringing its mega-popular Texas HoldEm poker game to the living room TV set, but it’s not going through a major video game console manufacturers to get there.

In addition to its social media and mobile gaming apps, Zynga is now offering Texas HoldEm as a Google TV app — the first set-top box platform to feature the game. The game has almost 30 million active monthly users across all platforms (Yahoo, Google+, iOS and others), according to AppData.

Technically speaking, Google TV’s support for Flash-based web sites means players can already play Texas HoldEm Poker and other Zynga games through the web browser. However, the new Google TV version announced today is “especially optimized for playing poker from the comfort of your own couch,” and easily controllable with the Google TV remote, Zynga said.

The announcement comes after Google recently updated its struggling TV platform with support for the Android Market, granting users access to TV-optimized Android app games like Droplets as well as many other useful features.

But the additions might be too little too late for Google TV. The platform has previously had trouble gaining a foothold in the market due to interface problems and a lack of content availability. Major Google TV hardware supporter Logitech announced last month it was giving up on the platform after losing $100 million on its Logitech Revue box since last December.

Other video-streaming-focused set-top boxes have also made small moves into gaming. For instance, Roku’s addition of support for Angry Birds on its devices earlier this summer. Integrated smart TV platforms from manufacturers including Samsung, LG, Sony and Panasonic have also dipped their toes into gaming, with support for simple titles, like Tetris, that can be downloaded directly to the television set.

And device manufacturers aren’t the only ones that realize the potential in set-top box gaming. In October, startup PlayJam announced it had raised $5 million for what many see as a burgeoning Smart TV gaming market as well as a way to get around the established console makers’ control of the living room TV.