Zynga is leaving its cartoon roots behind with a big redesign of its flagship Zynga Poker, it’s top-grossing game, for mobile players today.

The design is more realistic, using player photos and a more “immersive” social gameplay. The redesign is a response to customer’s demands that makes the game appear to be more realistic and elegant, like a real casino. In doing this redesign on its No. 1 monetizing game, Zynga and its new chief executive Don Mattrick (see our interview) are taking a big risk. But it’s all in the name of refreshing a game for the multibillion-dollar mobile era and disrupting itself before somebody else does it — especially since Zynga’s has struggled to recapture the success it first found years ago on Facebook. 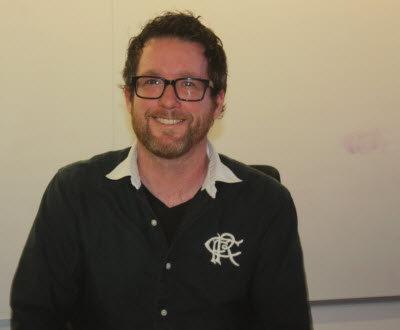 Above: Nick Giovanello of Zynga

About 350 million people have played Zynga Poker, and millions still play every day. But more than 100 social casino game startups have challenged Zynga, and others have taken the lead in market share in the casino games. Caesars Interactive has 14.7 percent of the social casino game market while IGT’s Double Down has 12.1 percent. Zynga is now third with 10.1 percent of the market, according to market analyst firm Eilers Research. In poker alone, the social-gaming giant faces up to 30 rivals around the world.

The new mobile game runs faster and gets you into a game as soon as it can. It adapts to your skill level and places you at a poker table that matches your level, gameplay patterns, and preferences.

The graphics have a lot of red and gold. That’s a lot like modern day casinos, where red makes you feel more aggressive and gold makes you feel rich. The icons are color coded so you can make your choices more easily in games like Texas Hold’Em or a Shootout Tournament. The dynamic audio is also aimed at making you feel like you are on a casino floor.

Nick Giovanello, the creative director for Poker Mobile, said in an interview with GamesBeat that he joined the team last year at a pivotal time in the history of the 7-year-old game that has been Zynga’s cash cow.

“Poker is a 200-year-old game,” Giovanello said in a chat at Zynga’s headquarters in San Francisco. “How do you reinvent that experience? We wanted to create an app that was rearchitected for mobile and reimagined. It’s not trivial to do that.”

The team focused on better design, a forward-looking user interface, smart integrated systems, and a brand-new engine to bring better animation and effects.

Zynga Poker launched in July 2007 as Zynga’s first social game on Facebook. It grew to an audience of tens of millions and was one of the early titles that convinced players to embrace virtual goods, or playing a game for free and buying virtual items (in this case, poker chips) with real money. It also woke up the online gambling industry by showing them how wide an audience a game such as social online poker could get, even if you couldn’t actually cash out your winnings.

“We are going back to our roots in social,and players will find that the new Zynga Poker delivers entirely new layers of social, making it easier for you and your friends to join the same table and instantly connect,” said Clive Downie, Zynga’s chief operating officer, in a blog post today.

The key at the beginning, Giovanello said, was to forget about seven years of constraints and embrace an “authentic Vegas-style experience.” The title isn’t necessarily about being realistic, but about being who you want to be.

“We had to think about what matters, about how we want our players to feel,” he said. “It’s more social, with an emphasis on quality, immersive, and personal, like you have permission to dream, play and win.”

He added, “We looked into the psychology of casinos. Red encourages split-second decisions. Gold increases value, and the lighting changes at night.”

At the table, it’s easier to see whose turn it is based on the size of the player’s photo. The pictures are less cartoonish. The chips are tactile to your fingers on a touchscreen.

Giovanello said he was encouraged to take risks by the new chief executive Don Mattrick. The team has had turnover, but it includes veterans who have worked on the game for years.

“When I joined and looked around at the team, I had to ask if they were satisfied with the experience as it was, and if they were getting the results they wanted,” Giovanello said. “I believed we could do a lot more, and we have permission. It’s a risk when you make changes to a successful game. But there’s a level of creative confidence at this company that I have never seen before.”

“We get an opportunity to give two things: things that are proven, that people love, and things that are innovative, that add to the surprise and delight of the experience,” Mattrick said in an interview with GamesBeat.

“This is just step one of the design,” Giovanello said. “This is the tip of the iceberg.” 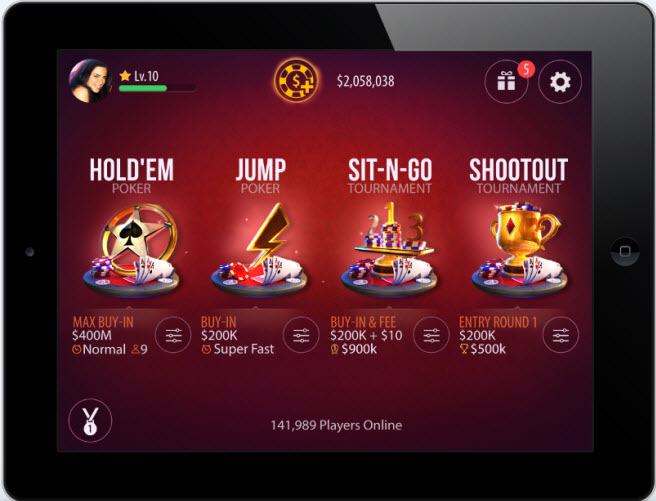