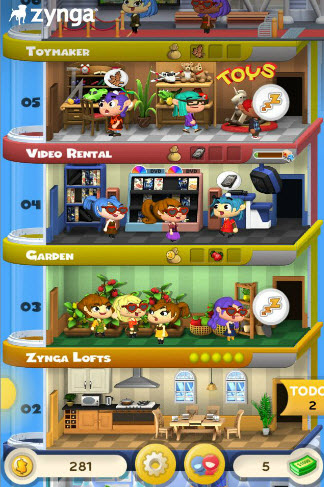 Zynga launched its Dream Heights mobile game for the iPhone and iPad today. The title enables players to build the “skyscraper of the century,” but the game is sure to get a lot of press because Zynga has been accused of ripping off the game from independent developer Nimblebit, creator of Tiny Tower.

Zynga acknowledged its entry into the popular genre wasn’t the first.

“While Zynga surely isn’t the first of many great games already in this category, Dream Heights brings your Facebook friends to the mobile game – making it the most social tower game of its kind,” the company said. Dream Heights is the third game in the Dream series, which also includes Dream Zoo and Dream PetHouse. In the Dream Heights game, users can shop with friends and visit friends’ towers; they can explore their own tower and those of friends; they can build their tower higher and higher and can run up to 50 stores.

Copycat charges from Nimblebit and Buffalo Studios prompted Mark Pincus, chief executive of Zynga to say his company wasn’t copying and that it was adding more social elements to existing genres of games. With these titles, consumers would decide whether they are adequate or not. He noted that the Tower genre of games has existed since 1994, when Maxis launched SimTower. The genre became popular in 2009 when Tower of Babel launched in China, followed by Tower games on the iPhone dubbed Yoot Tower, Tower Up, Tower Town, and Tower Blocks.

It is a smart idea for Mark Pincus and Zynga to try and lump all games with the name Tower together as an actual genre whose games borrow from each other. Unfortunately sharing a name or setting does not a genre make. The games Pincus mentions couldn’t be more different. Sim Tower is a true “sim” with macroscopic management and fine tuning of a buildings facilities. Tower Bloxx is a timing-based high score game.

If you take a quick look before “pulling the lens back” as Pincus suggests, you’ll find innumerable of details in the game that were painstakingly crafted to be identical to Tiny Tower. These are core gameplay mechanics and rules, not similar settings or themes that games in the same genre might share.

Why are there 5 different business types like Tiny Tower? Why do 5 people fit in an apartment instead of 4 or 6? Why are there VIP elevator riders that perform the same functions as Tiny Tower? Why do businesses employ exactly 3 workers and produce exactly 3 products that are stocked in exactly the same way as Tiny Tower. Even the tutorials at the beginning of the game follow the exact same steps. All of these things are poorly hidden underneath an uninspired veneer which has become Zynga’s trademark.